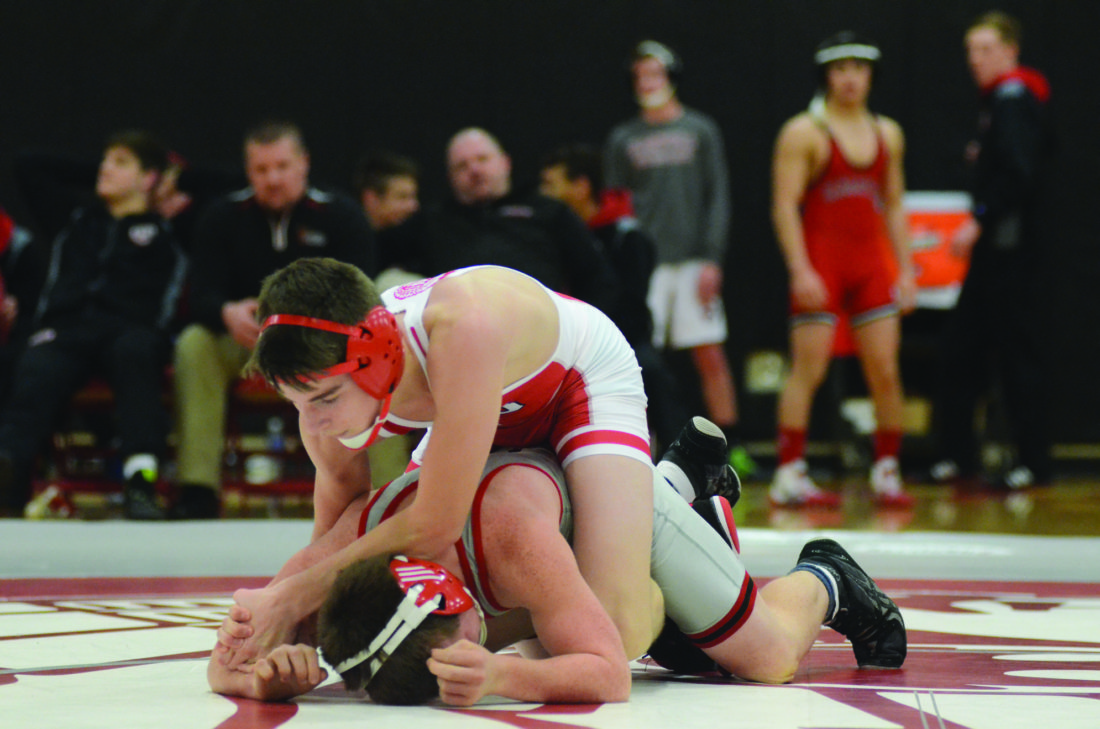 Bellefonte’s Zack Taylor (top) takes out the opposition from Clearfield and forces him into a submission move. (For The Express/Shareik Flowers)

The Red Raiders then went out and performed like they were trying to impress the latest inductee into the Bellefonte Wrestling Hall of Fame – Mitchell Port.

Bellefonte blasted Clearfield, 46-19, a final befitting the celebratory mood of the night.

Port, a three-time PIAA placewinner who became Bellefonte’s 10th state champion when he won the 125-pound title in 2010, graduated with a 156-18 record and 89 pins, the winningest wrestler in school history.

“What set himself apart from everyone else was his work ethic. If you put in the time, great things can happen. He was a guy who was one of our best, if not the best, and it was pretty special having him back.”

Port was a three-time All-American at Edinboro, finishing as an NCAA runner-up in his sophomore and senior campaigns and a third-place finisher his junior year. His career record was 132-17.

After he was honored, Port sat back and watched the Raiders win nine of 14 bouts. That came on the heels of a third-place finish over the weekend at the Virginia Duals in Hampton, Virginia.

“I thought we wrestled pretty solid. I was a little concerned about the travel back. We wrestled really hard down at the Virginia Duals against some tough competition. We came back a little banged up,” Maney said.

“Our guys had to dig a little deep. Overall, I was pleased with the effort. Our guys dug deep and battled the entire match.”

The Red Raiders won nine of 14 bouts, among them four falls, two forfeits, two decisions and a major decision.

The pre-match draw set the starting weight at 126 pounds and Bellefonte took advantage, reeling off wins in the first three weights to jump out to a 12-0 lead.

Nate Wert blew open a close match with a reversal and two nearfall points in the third period earn an 8-2 win at 126. Keegan Rothrock locked up a near cradle and planted his opponent at the 3:10 mark o the second period. Cam Cappolo followed with a dominating 6-0 win at 138 and the Raiders were off and running with a 12-0 lead.

Clearfield cut into the lead with a major decision at 145, but Bellefonte countered with pair of six-point wins at 152 and 160 to stretch the lead to 24-4.

Brock Port received a forfeit and then Chase Gardner built a 10-3 lead before scoring a fall in 4:41.

Bellefonte won two of the final three bouts as Alex Coppolo used an escape and three takedowns in the final period to earn an 11-2 major decision at 106 and, at 113, Cole Stewart rolled up a 9-0 lead before locking up a crossface cradle and scoring a fall in 1:36 at 113.

Clearfield closed out the night with a decision at 120.

The Raiders improved their record to 15-1 and their coach was pleased.

“I’m happy for those guys to continue what they’ve been doing,” Maney said.

The Red Raiders return to action at 7 p.m. Tuesday when they wrestle at Central.