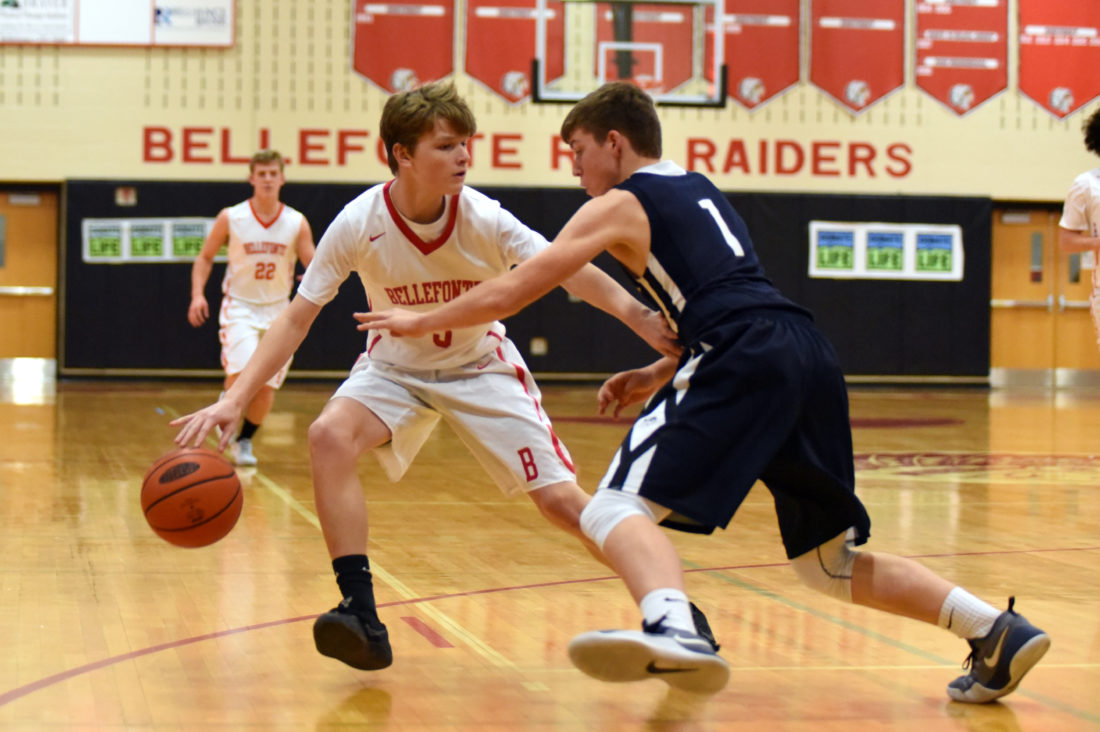 Photo by TIm Weight: Nate Tice attempts to maneuver past a Rams defender in Bellefonte’s 34-29 win over Penns Valley. Tice finished the game with five points.

The win is the third of the last five games for the Red Raiders. It’s also only the second win that the home crowd witnessed this season. It’s the first home win since Jan. 3 when the Red Raiders beat DuBois High School with a 59-37 score.

Fortney only had four points heading into the fourth quarter; however, he exploded into the scoring column with 10 points in the final eight minutes.

Defense was on fire for both teams since the opening tip-off. Only two baskets and three free throws were the results in the first quarter with a 5-3 score heading into the second quarter in favor of the Rams.

The Rams then gained a little momentum with 11 points in the second quarter to have a 16-12 lead at halftime.

An explosive defense only gave up one basket in the third quarter to take a 23-18 lead heading into the final eight minutes.

For the first time in a while heading into the fourth quarter, the home Red Raider crowd could sense a home victory.

Bellefonte’s first year head coach Kris Glunt was very proud of his team’s efforts in the second half.

“We really wanted to turn up the intensity on the defensive side of the ball,” Glunt said. “It allowed us to play in a little faster pace and that suits us a little bit better.”

“Cade Fortney was incredible for us tonight,” Glunt added. “He has really stepped up the last couple of weeks and he was the real difference for us offensively.”

The Bellefonte boys basketball team will look forward to hopefully clinching a spot in the playoffs. The Red Raiders next travel to Clearfield High School (11-1 Overall) next Wednesday, Jan. 25 for a 7:00 tip-off against the Bison.