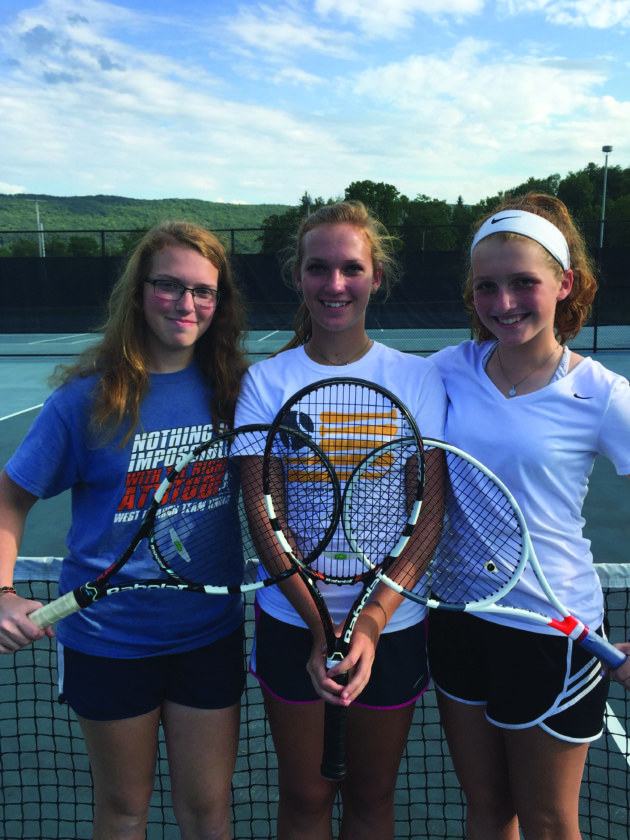 “Their willingness to work has changed my view of the program. Other girls now look at them as a standard. They push everyone, including me to be better.” Those are the words of Central Mountain Lady Wildcat tennis coach, Pete Wert, in reference to the McCluskey sisters.

Quinn, Jolee and Kendall McCluskey have been making a racket on the CM tennis team over the course of the last few years. The three sisters are the daughters of Joseph and Wendy McCluskey of Lock Haven.

Quinn, the oldest, is set to begin her collegiate career at East Stroudsburg University after a fine four-year career for the Lady Cats. Jolee, a four-year No. 1 player for the Lady Cats, is a senior this year. Kendall, the youngest, is just a sophomore at Central Mountain and competes in the No. 2 slot.

Collectively, they have been making quite an impact on the Lady Wildcat program over the course of the last four plus years.

Each of the girls began their tennis careers at about the same age. They say they first picked up their rackets in about the 6th or 7th grade.

In addition to the love they each have developed for tennis, there’s a shared interest in their future career choice. Each girl claims that her plan for the future involves cyber security.

Not surprisingly though, they do have some differences as well. Quinn claims that her strengths as a player are her serve and backhand. She says that she needs to continue to work on her volleys. Her most enjoyable part of tennis is “the individuality of the sport.” She loves the fact that while on the court it is she vs. her opponent. This is an enjoyment she shares with Kendall.

Jolee on the other hand finds the competitiveness of tennis to be the most enjoyable part but contends that it can be a bit stressful to be “on your own” on the court. Jolee believes that her strengths as a player are her serve, as well as the ability she has to judge her opponents position. As for her weaknesses, she knows that she must continue to focus on developing better footwork and improve volleying as well.

Kendall claims that the strongest part of her game right now is her cross-court shots, hard groundstrokes and volleying. At the same time, she recognizes a need to focus more on the consistency within her game.

Sisterhood and tennis…what does it mean for these sisters? Ask them and they will smile and even laugh a bit. They say that tennis has brought them closer together in that it has given them a bond.

It is a reason to spend a lot of time together doing something that they each love. However, with a bit of prodding, they admit that they can get a little competitive.

For example, last season while slots were being determined for the Lady Wildcat team, Quinn and Jolee faced off. That surely has happened many times.

Jolee stated that it got pretty tense with Quinn making some “shady calls” during the match. Jolee’s assertion caused a smile to break out on Quinn’s face as she too admitted that things could get competitive at times.

This competitiveness and willingness to work hard is something that Coach Wert certainly appreciates. He strongly feels that the impact these three have had will likely continue to have on Lady Wildcat tennis is immeasurable.

As for their take, the girls each had advice for younger kids currently or thinking of playing tennis.

They say that you must be willing to work hard everyday to be successful. As Kendall says, “the more you hit, the stronger you get.”

Each of the girls stated that it has felt good to be a part of the Lady Wildcat program. They say that representing their school has been fun and Jolee stated that going undefeated last year “felt good.”

So one is off to college to begin her collegiate career. One has begun her final year of a four-year high school career that has seen her as her team’s No. 1 player each year. There is also the youngest of the three following in her sisters’ footsteps and looking to make a name for herself as well.

Together, they’ve certainly made a racket and would love to continue to represent the Lady Wildcat program and themselves very well.