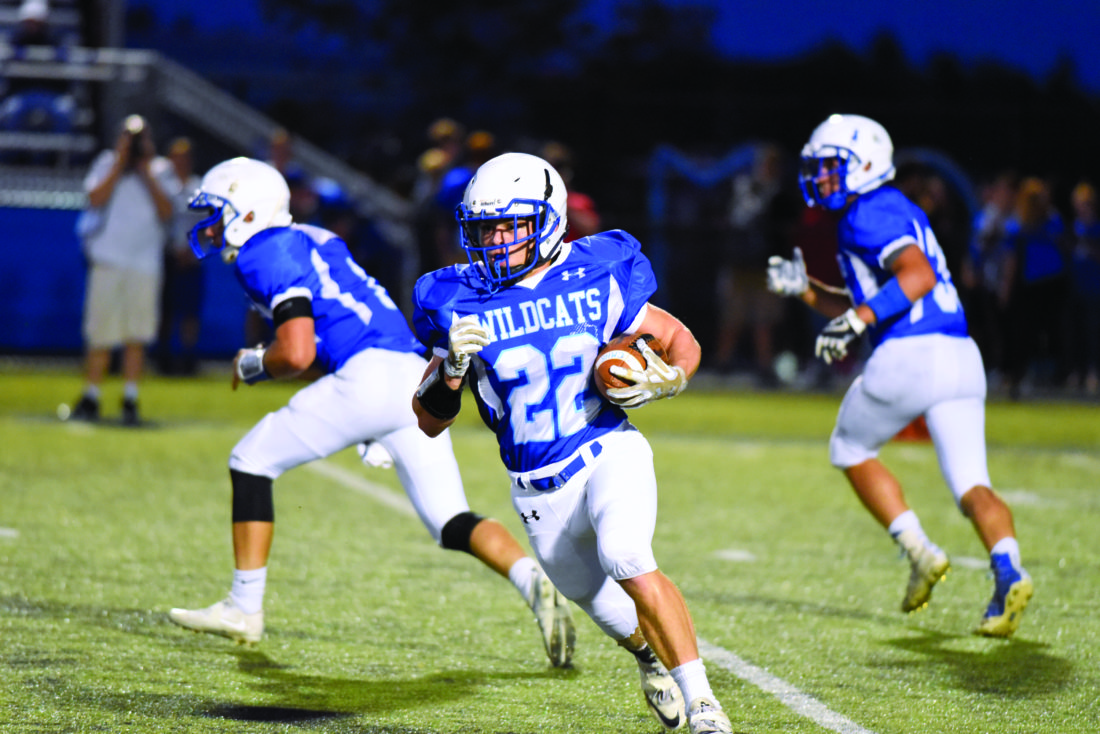 MILL HALL – Central Mountain has yet to get over the hump.

The Wildcats were overwhelmed on both sides of the ball as they were dropped by the Clearfield Bison, 49-10.

Following the loss, Central Mountain’s record dips to 0-5 on the season.

“In the first half we did some good things,” Central Mountain coach Jim Renninger said. “But [Clearfield’s] quarterback is a really nice player and we had some breakdowns, schematically and defensively.”

The Bison might’ve been the most athletic team the Wildcats faced all-season. Central Mountain’s defense struggled to fulfill assignments and surrendered three touchdown plays over 50 yards.

Clearfield quarterback Isaac Rumery ended the night with 288 passing yards and four touchdowns. He ran for another 23 yards and a score.

“He was really good and we didn’t get a lot of pressure on him,” Renninger said of Rumery. “And his receivers just ran by us a couple of times because they’re really fast.”

Central Mountain’s lone touchdown of the game was by Rocco Stark, who had an impressive showing last week. He took his opening handoff of the second quarter 75-yards up the middle for the score to cut CM’s deficit, 14-7. Stark went through the line untouched before darting to the end zone for Central Mountain’s longest-scoring play of the season.

“Clearfield was bringing people off the edge and Rocco made a big play,” Renninger said of Stark’s score. “He’s an explosive kid and he can do those things. He’s a young kid and we look forward to seeing him over the next couple of years continue to make those kind of plays.”

The game’s momentum shifted after Clearfield quarterback Isaac Rumery threw a 60-yard touchdown pass to Micah Heichel to put Clearfield up 7-0 in the first quarter. Rumery connected with Heiechel in stride who made an over-the-shoulder catch after flying past Central Mountain’s secondary.

Rumery connected with Heichel again on the Bison’s next possession to put Clearfield up 14-0 with 9:37 left in the second quarter. Heichel was open down the seam, as the Wildcats struggled to contain the middle of the field.

The Wildcats surrendered another deep ball when Rumery connected with Taye Lynch for a 72-yard score. Lynch made a nice catch down the sideline before finding the end zone to put Clearfield up 28-10 in the third quarter. The score was the beginning of a 28-0 second half run by the Bison.

“On Clearfield’s big plays, their kids just out-ran us and Rumery threw a great ball,” Renninger said. “Sometimes you go up against someone who’s better than you, athletically, and that happens.”

CM enters halfway mark 0-5, but a win could be soon. They face Mifflinburg next week on the road, a team they defeated 24-17 last season.

“We’ve got two games coming up that were wins for us last year,” Renninger said. “But those teams are improved and will look to battle us. We’ve got to try and get a win.”