IMPRESSIVE: After a 5-6 season last year, Bellefonte sits at 5-1 here in week seven 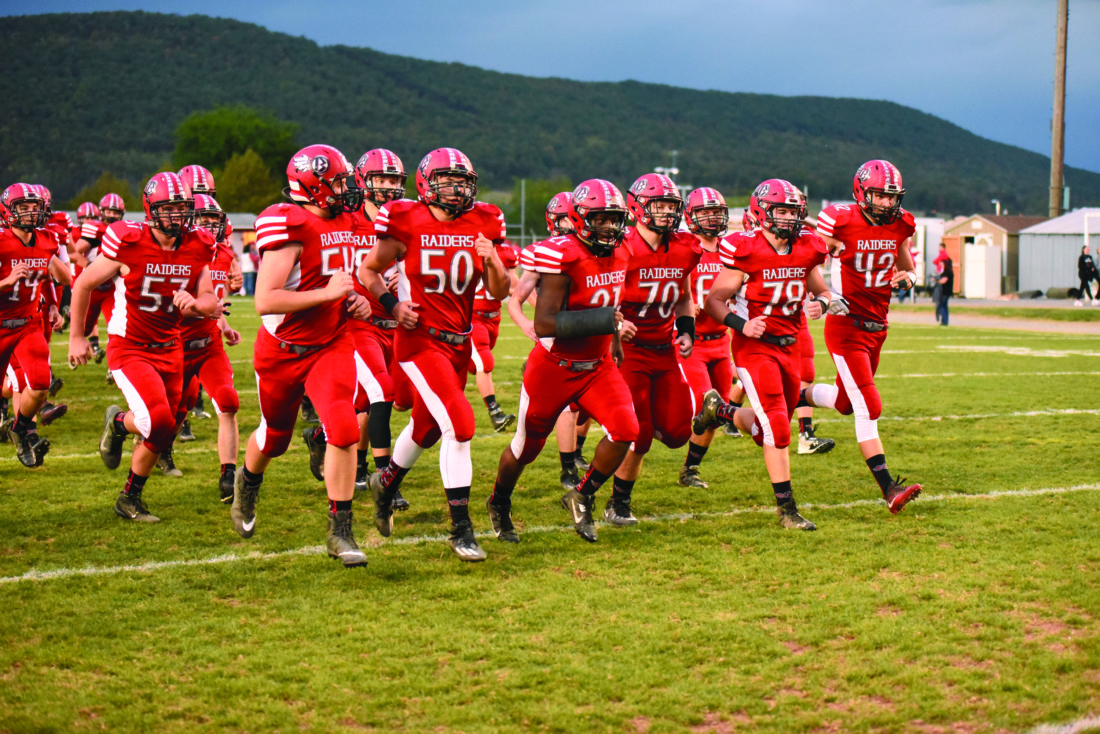 The Bellefonte High School Red Raiders football team runs onto the field before a game against Clearfield High School. The Red Raiders are 5-1 (3-1 in conference play) thus far into the 2017 season with Penns Valley Area up next. (The Express/Tim Weight)

BELLEFONTE – While most people around the Lock Haven area are still focused on their Central Mountain Wildcats and others have their eye on Jersey Shore, there’s a certain team in the area that has floated under the radar and exceeded expectations sitting at 5-1: Bellefonte High School.

Sitting here in week seven with only one loss, not a lot of folks predicted that.

Before the season, I mentioned that the Red Raiders would be a better team. I didn’t think their 5-6 record in 2016 accurately represented the talent that Bellefonte had. I knew they were a good team, but the Red Raiders aren’t just good, they’re showing us flashes of greatness.

Let’s review their 2017 season up until this point, because it’s been filled with domination from Bellefonte – including some rivalry magic.

To kick-off the season, the Red Raiders faced off against Jersey Shore. The Bulldogs were ranked No. 1 in the preseason according to both myself and Chris Masse from The Williamsport Sun-Gazette. All of the talk was surrounding how much of a powerhouse that Shore was going to be this season. But that didn’t intimidate Bellefonte at all. The Red Raiders came out and shocked the community with a 17-13 upset over their rival – quite the start to the 2017 campaign.

Then up next came a high-scoring affair against Huntingdon High School – currently a 6-0 powerhouse. This would become Bellefonte’s only loss of the season up until this point, but it came with a lot of positives: It showed the flashes of greatness on the offensive side of the ball that the Red Raiders are capable of – getting several touchdowns against a tough defense in a 52-31 shootout.

Next on the radar was Philipsburg-Osceola, where Bellefonte would annihilate the Mountaineers for a 42-8 victory – recovering from their sole loss of the season.

Then came Central Mountain High School. Their cross-river rival. With the massive production that the Wildcats lost from last year due to the Justin Neff graduation and the early struggles of the young season already, most had Bellefonte winning big. But the Red Raiders had to battle it out in this one. It took a total of four overtimes in order for Bellefonte to defeat Central Mountain, and it was an incredible game. And I’ve talked about this multiple times before, but I still can’t get over that missed field goal. The one where everybody thought CM won the game by making said field goal, all for it to be “fake news” and eventually lead the Red Raiders to a 34-31 win in four overtimes. Just an absolutely spectacular game overall – and a game that may be the turning point for the 2017 Bellefonte football season. Since then, the Red Raiders have rolled.

Just look at the next two games on the schedule, and the most two recent up until this point in the year:

The 49-14 shellacking of Tyrone left a lot around the community impressed – especially after that scare against the Wildcats. Bellefonte then comes out and rolls all over Clearfield High School, 55-28. And this now has the Red Raiders sitting at 5-1 on the season – and this comes after a 5-6 year in 2016.

Like I mentioned earlier, I knew Bellefonte was a better team than what their record showed last year – but did I think they would be THIS good?

But it makes sense.

The Red Raiders had a lot of players coming back from 2016, and when you look at the schedule from last season, four out of the six losses were extremly close games. Mix those couple of factoids together and you have the formula for a pretty good football team. But Bellefonte isn’t only a good football team, they’re a great football team.

And a lot of the ‘great’ credit has to go to players like Dylan Deitrich, and of course the coaching staff led by Shanon Manning – but overall, Bellefonte has played really good football in 2016. It’s been fun to witness.

But when you zone in on Deitrich specifically, it’s incredible. Take last week for example.

In a 55-28 victory against Clearfield High School, Deitrich had a whopping seven touchdowns – six rushing and one passsing. His yardage combined for over 300 with 177 yards rushing and 140 through the air. And that’s exactly why he was made this week’s The Express Athlete of the Week. Just incredible numbers from Deitrich against the Bison.

In six games, Deitrich has a total of 733 rushing yards and 12 total touchdowns. And not only can the kid run, but he can pass – having a total of 646 passing yards and six touchdowns. Simply put: This guy is a weapon. And if Coach Manning continues to use him correctly and let him dominate, the Red Raiders are poised to be a serious threat come playoff time.

And honestly, with Deitrich’s health intact, Bellefonte could ride him to a pretty far distance in the postseason. Keep an eye on Deitrich, folks. That kid can ball.

When you look at the near future, the Red Raiders have four games left in their 2017 regular season. They face a 2-4 Penns Valley, 4-2 Central, 5-1 Chestnut Ridge, and their rival – a 3-3 Bald Eagle Area team.

We’ll most likely see Bellefonte go 6-1 on the season after an easy win against the Rams of Penns Valley, but when we get to the Central and Chestnut Ridge games, we could potentially see some problems for the Red Raiders. I can see Bellefonte taking at least one out of two of those games. We could be looking at a 7-2, possibly 8-1, Red Raiders team heading into their rivalry game against Bald Eagle Area. And I’ve said it before: Anything can happen in rivalry contests, but if everything goes Bellefonte’s way, they could have a 9-1 regular season on their resume.

And nobody certainly saw that coming.

I honestly feel like because of last year, this season’s Bellefonte football team has went under the radar for most people – including myself. But I’m no longer making that mistake. Bellefonte is for real. Bellefonte is really good. Bellefonte is great.

The Red Raiders are a threat to do some pretty huge things here at the end of the year.

And then when the playoffs come… Well, we’ll worry about that when the time comes.

It’s just impressive how the Red Raiders have gone from a 5-6 season, to now sitting at 5-1 here in week six. I’m impressed.

The start of the Williamsport Crosscuttersâ€™ season was scheduled for Thursday, June 18, at State College to begin ...