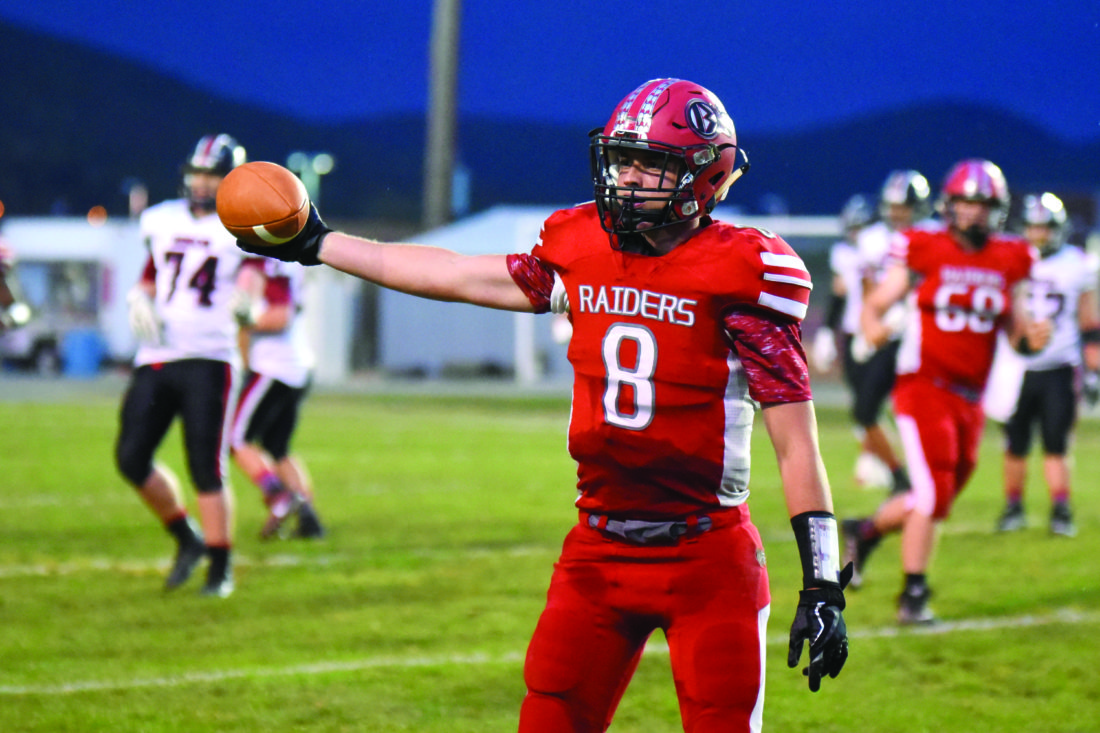 Sophomore RB/LB C.J. Funk (8) of Bellefonte High School celebrates after an interception against Clearfield High School. The Red Raiders are currently 7-1 on the season and face-off against 7-1 Chestnut Ridge this Friday night on the road. (The Express/Tim Weight)

BELLEFONTE – And here we go again with Bellefonte proving me wrong.

Last week in my predictions, I had Central taking out the Red Raiders by a score of 42-24. I figured that Bellefonte would be more competitive in this game than the 2016 contest where they suffered a 40-0 loss to the Dragons.

But not only were the Raiders more competitive, they completely flipped the script on me.

Coach Shanon Manning and his Red Raiders did a complete 180 on me.

I said in last week’s column about Bellefonte that the Raiders left me impressed after a 6-1 start, that I wouldn’t doubt them again – after all, they’ve proved me wrong several times this season.

And what did I do?

Instead of sticking with my gut and believing in the Red Raiders, I decided to take the Central Dragons. I think most did in that situation – The Dragons were 5-2 and the game was in Martinsburg.

But I won’t try to excuse it, nor cover it up: I was wrong.

When halftime came around, Bellefonte was already up by a score of 21-14 – this coming, of course, before the second half adjustments.

When that half did come around, the Red Raiders rolled – both on the offensive and defensive side of the ball. Bellefonte held Central to just eight points in the second half, while the Raiders offense took it upon themselves to put up 28 total points on the board.

Once again, proving me and the rest of the doubters wrong.

And a lot of the credit for this win and for such a successful Red Raider season is this kid Dylan Deitrich – Bellefonte’s star runningback (according to MaxPreps), and well, quite frankly, their star quarterback as well. In the game against the Dragons, Deitrich threw 10/14 (.714 completion percentage) for 154 yards and a touchdown – not to mention the 130.1 QB rating. Not only that, but Dylan “Flash” Deitrich – we should totally call him that – ran for an astounding 262 yards and two touchdowns.

For passing on the season, Deitrich has thrown for 859 yards with 8 touchdowns – and an incredble 102.6 QB rating to go along with it.

And here’s when it gets even better.

For rushing on the year, Deitrich has ran for a total of 1,117 yards and 14 touchdowns – and this only coming in eight games, folks.

I mean, damn. This kid can ball.

The season isn’t even over yet and I think you have to give him this area’s High School Heisman already.

I can’t get over how great those numbers look.

But after a good win against a 5-2 Central on the road, Deitrich and his Red Raiders now come into an interesting matchup against the also 7-1 Chestnut Ridge – where they’ll be on the road in New Paris against the Lions. Not only is Bellefonte facing a great team, but they’re also facing the most unique team that they’ll play all season.

Three to be exact – Two from Maryland and one from West Virginia.

Another thing to be pointed out about the Lions: They’ve blownout every opponent they’ve faced, or at least won by a comfortable margin. Chestnut Ridge has outscored opponents, 350-97.

Also, the atmosphere that the Red Raiders are walking into?

Now I can’t lie, after the win against Central on the road, my confidence is about half and half for Bellefonte in the game against Chestnut Ridge – much more than it has been, even though the Red Raiders have had a fantastic season.

But the Lions are such a powerhouse team that has played out-of-state talent, and has dominated every team on their schedule up until this point. And like I said earlier: On the road – and on Senior Night?

And quite honestly, it’s going to be a tough pick for me.

Who am I picking?

Well, you’re just going to have to wait until tomorrow for that.