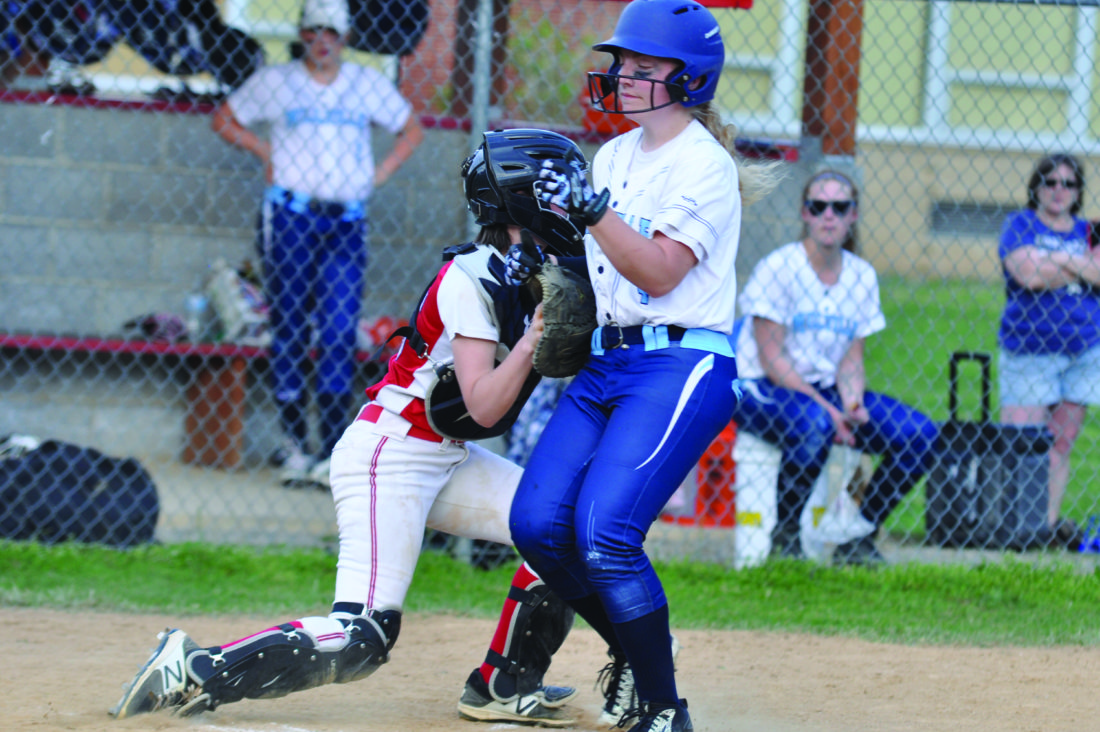 Bucktail High School’s Emily Cross stops Lady Quaker Hallie Ebersole by tagging her out in front of the plate in the 6th inning to stymy a late Millville rally. The Lady Bucks won, 5-3. (The Express/Kevin Rauch)

FARWELL — Riding a four game losing streak that featured too many errors than anyone from Bucktail would like to think about, there had to be a part of the Lady Bucks that were thinking ‘here we go again’ in the top of the first in yesterday’s game against Millville.

Belle Girton worked a leadoff walk before capitalizing on two Bucktail errors to put her team up 1-0. This game was about to be different however for the Lady Bucks, who would only commit one error the rest of the game.

Bucktail senior Maria D’Onofrio started out the bottom of the third with a roller to third base forcing a bang-bang play at first in which she was called safe, giving the Lady Bucks a much needed boost. Myka Poorman scored D’Onofrio by innings’ end knotting the score 1-1.

Lindsay Fisk started the top of the fourth off with a hit, and following a third Bucktail error scored from a Maddi Charles sacrifice. That score held until teammate Bre Wenner smoked a two out shot in the top of the 5th, scoring Girton and putting the Lady Quakers up 3-1.

Bucktail’s Emma Intallura quickly answered in the bottom of the 5th with a single followed by Aaliyah McGowan reaching base on an error. Tessa Cowfer delivered the big hit when she crushed a ball on a rope on the left side of the field, scoring Intallura and McGowan.

Bucktail’s Myka Poorman got out of her own jam in the top of the 6th when the Lady Quakers had runners on third and second with no outs, but Poorman would retire the next six batters and preserve the 5-3 win. After four losses, it was a welcomed sight for Bucktail coach Mike Poorman to get back into the win column.

“It all comes back to errors,” said Poorman following the win. “This was the second time all year we had three errors or less and we win, it’s been the story of our season,” said the coach. “That and big hits, Tessa had a big hit for us today but we just haven’t been getting those unexpected dropping balls, we’ve had to work for everything we get”.

“We continue to hit the ball really well, but we had the bases loaded three times and only scored two runs, we need some more timely hitting,” he continued. “Hopefully this puts us over the hump, we’ve been in all but one or two games, and hopefully this moves us to where we need to be.”

Millville drops to 6-6 on the season while the Lady Bucks move to 5-8 and will be at CMVT today.