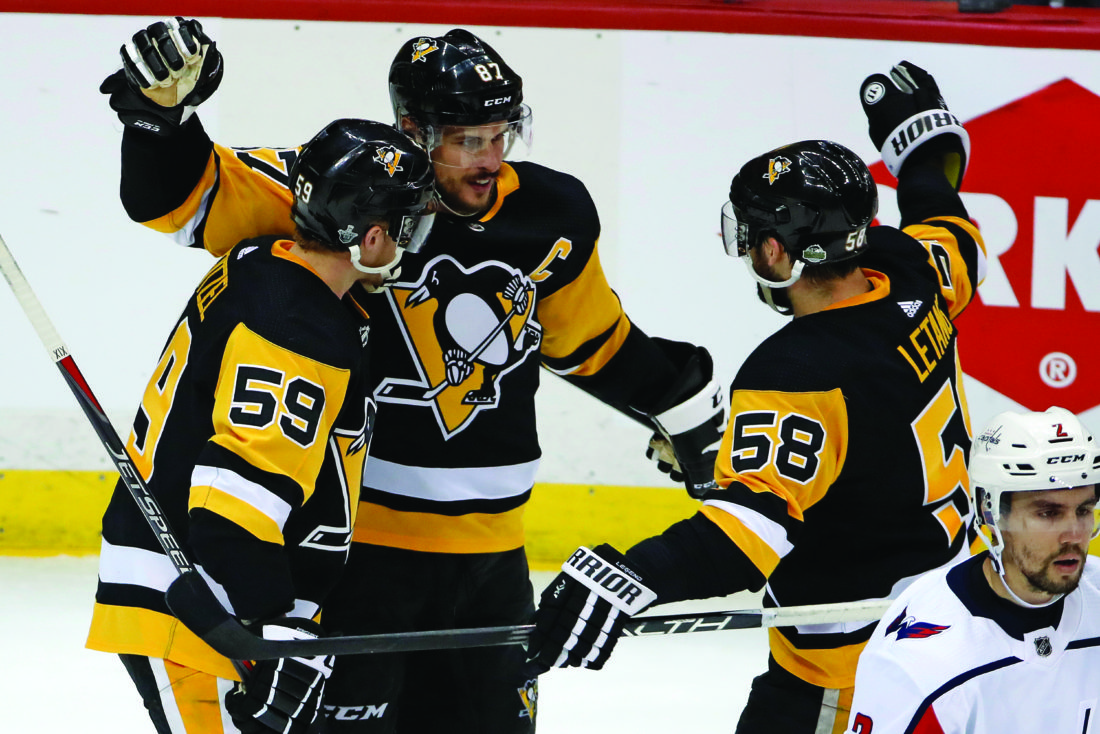 Pittsburgh Penguins' Sidney Crosby (87) celebrates his goal with Jake Guentzel (59) and Kris Letang (58) during the second period in Game 3 of an NHL second-round hockey playoff series against the Washington Capitals in Pittsburgh, Tuesday, May 1, 2018. (AP Photo/Gene J. Puskar)

PITTSBURGH — Alex Ovechkin knocked his own rebound out of midair and by Matt Murray with 1:07 remaining to lift the Washington Capitals to a 4-3 victory on Tuesday night in Game 3 of their increasingly testy Eastern Conference semifinal series with Pittsburgh.

Ovechkin gave the Capitals a 2-1 series lead when he collected a pass from Nicklas Backstrom and fired a shot that ripped by Murray before hitting the right post.

Ovechkin stayed with it and his baseball-like swat gave him eight goals in the playoffs and the Capitals their fourth consecutive road win in the postseason.

Jake Guentzel had a goal and an assist for Pittsburgh. Sidney Crosby and Patric Hornqvist also scored, but the Penguins lost consecutive playoff games for only the fourth time since the start of their runs to consecutive Stanley Cups began in 2016.

Matt Murray made 18 stops but couldn’t get his glove — a problem area all postseason — on Ovechkin’s initial shot, allowing the Russian star to have a shot at the rebound.

Game 4 is Thursday night in Pittsburgh.

The game featured a significant uptick in physical play, a byproduct of the pressure and the fallout of the NHL’s decision not to discipline Washington’s Tom Wilson for his high hit in Game 2 on Pittsburgh defenseman Brian Dumoulin, who went into the league’s concussion protocol after Wilson blindsided him while Dumoulin braced for a collision with a charging Ovechkin.

Dumoulin was back in the lineup to start Game 3 and both teams stressed the need to move forward considering so much is at stake. Wilson claimed the hit was “unavoidable” and “an unfortunate hockey play.”

Maybe, but the chippiness that has come to define a rivalry that’s equal parts heated and one-sided — the Penguins have won nine of 10 playoff meetings with Washington — ramped up in Game 3 with Wilson once again in the middle of it.

Guentzel and Hornqvist scored in a 2:16 span of the second period to take a 2-1 lead and the Penguins appeared to have momentum when Wilson made a run at Pittsburgh forward Zach Aston-Reese at the game’s midway point.

Aston-Reese was stickhandling near the Washington bench and had just let go of the puck when Wilson drilled him. The rookie was on the ice for several moments as play continued and ultimately threw his glove in frustration.

Wilson did not receive a penalty for the hit, one in which the initial point of contact was hard to discern. Was it the shoulders? The head? Either way the tenor changed considerably.

Stephenson tied the game shortly after the sequence and a crescendo of pushing, shoving and jawing followed.

Crosby put the Penguins back in front with 3:33 left in the second when he took a pretty pass from Guentzel — who occupied three Capitals before sliding the puck to his teammate — and buried it into an open net.

Niskanen, who spent four seasons in Pittsburgh before signing with Washington in the summer of 2014, blasted a one-timer by Murray 5:06 into the third to set up the finish.

NOTES: Penguins C Evgeni Malkin played 19:07 in his return after missing three games with a lower-body injury. … The Penguins hosted Humboldt Broncos junior hockey player Brayden Camrud, a survivor of the bus crash that killed 16 people — many of them teammates — last month. … Pittsburgh F Carl Hagelin skated with his teammates for a second straight day, but remained out of the lineup. Hagelin is dealing with an upper-body injury and has worn a full face shield while on the ice. … Both teams went 1 for 4 on the power play. … Guentzel has recorded a point in seven straight playoff games.