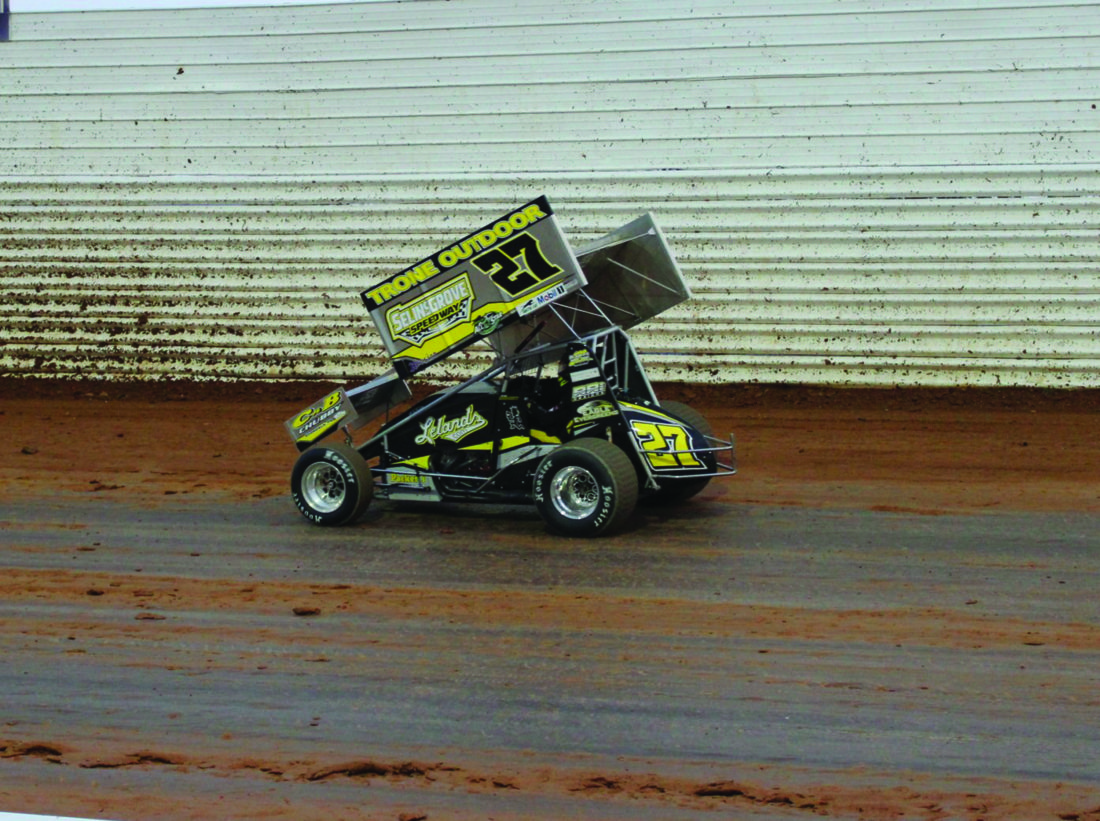 Greg Hodnett (27) was the winner at Williams Grove Speedway in his sprinter car over the weekend. Other local racing action included speedways Hummingbird, Selinsgrove, Dog Hollow and Clinton County. (The Express/Jamie Bird)

The Mason Dixon series traveled to the Clinton County Motor Speedway to challenge the regular competitors. The track was in excellent condition — wide, smooth and tacky. With the pill draw completed, Devin Frey in the 62 sat on the pole, with the No. 8 of Taylor Farlling outside row one. At the drop of the green, Frey set a blistering pace thru lap six. Moving through the field was Mr. Smooth, Jim Yoder, in the 42 car. The caution flew for the No. 57 of Mellott with a blown rear tire. With the field bunched up, the restart saw Yoder take the No. 42 to the high side to run side-by-side with Frey. Lap after lap, they were locked together. By mid-way, the leaders were in heavy lapped traffic as many of the 26 starters were all battling for position. Yoder drove the S&R Towing sponsored car to the cushion and was able to take the lead by two car lengths. Frey continued the pursuit, with the 5J of Jeremy Ohl and the 8 of Taylor Farlling on his rear bumper. With five to go, Brad McGinnis in the 13 and the 2J of Justin Weaver made their move to challenge the leaders. Four cars under a blanket all bidding for that first spot position! Holding off all challengers, Mr. Smooth, Jim Yoder took the No. 42 car under the checkered. Finishing second was Frey in the 62, followed by McGinnis, Ohl, with Weaver rounding out the top five.

A full field of 270 Micros took the green for the feature event, The Wild Child, Jeff Weaver moved through the field to claim the lead as the crossed flags were displayed. With the No. 17 of Troy Whitesel close in tow. Bobby Sanso in the 20S finished third followed by the X of Hockenbrock and Nick Whitesel in the 7NN rounding out the top five. In the Pro Stock division, Kevin VanAmburg in the 8 earned the pole with the 28J Johnny Bouse in second. VanAmburg powered the 8 from flag to flag. The battle was for second, as Bouse, AY Schilling, the No. 16 of Dawson, and the 6 of Noah Jensen all took turns hugging the rear bumper of the VanAmburg car. The finish saw a very happy VanAmburg as he picked up his first win of the season with Tommy Dawson, AY Schilling, Noah Jensen and Johnny Bouse in the top five. 11 front wheel drive machines took the green. Tim Campbell in the TJ Shooters car qualified for the pole, with the No. 6 of Eric Luzier in second. Campbell took his 2T machine to a commanding lead, finishing second was Luzier, the 31 of Orndorf, the 66 of Krevling and the No. 4 of Cody Stover for the top five. Wise Potato Chips provided bags of chips for all the kids attending, it is greatly appreciated. Harold and Sam Dickson won the 50/50, over $500! Capping off the evening, Robert Johnson and Bob Winn were the lucky winners to earn a five lap ride in the two seater Super Late Model. With Mr. Smooth driving, the two lucky guys got to see what it is like to run flat out up against the wall. Next week, the Patriot 360 Sprint Cars make their debut at CCMS sponsored by T&C Transport of Bellefonte, PA. Along with the 600 and 270 micros, and the Front Wheel Drive cars.

Meanwhile down at Williams Grove, Greg Hodnett was winning his first sprint car feature of the year and his 73rd win at the Grove. The super late model win was picked up by Jason Covert. At Hummingbird Speedway, a handful of new faces filled the pit area on Saturday night, including one from Ohio. Clearfield’s own Rich Howell parked his racer in victory lane for the very first time in his career in the Cypress Clock & Gift Shop Street Stock feature. Other feature winners on the night included: Chris Farrell from Clearfield in the BWP Bats Late Models, Mike Anderson from DuBois in the Sunny 106.5 FM Pure Stocks, Denny Fenton from Clearfield in the Swanson Heavy Duty Truck Repair Semi-Late Models, and Eric Luzier from Clearfield in the Aaron’s of DuBois Front-Wheel Drive Four-Cylinders.

Keith Bissinger of Orangeville rounded out the successful dirt track stock car showdown program with a victory in the 12-lap roadrunner race.

Down at the Lincoln Speedway, they finally got a race in, after six straight weeks of rain-outs.

And for New Oxford’s Jim Siegel, he finally got a win after a year-long drought by winning the 25-lap $4,000-to-win 410 sprint feature. Jeff Halligan won the 358 sprint division by leading all 25 laps of the special 360/358 Sprint Challenge. Over at Dog Hollow, Jon Lee from Mahaffey, won both the Townsend Gas & Oil Super Late Model and 358 Semi Late features for the second week in a row.