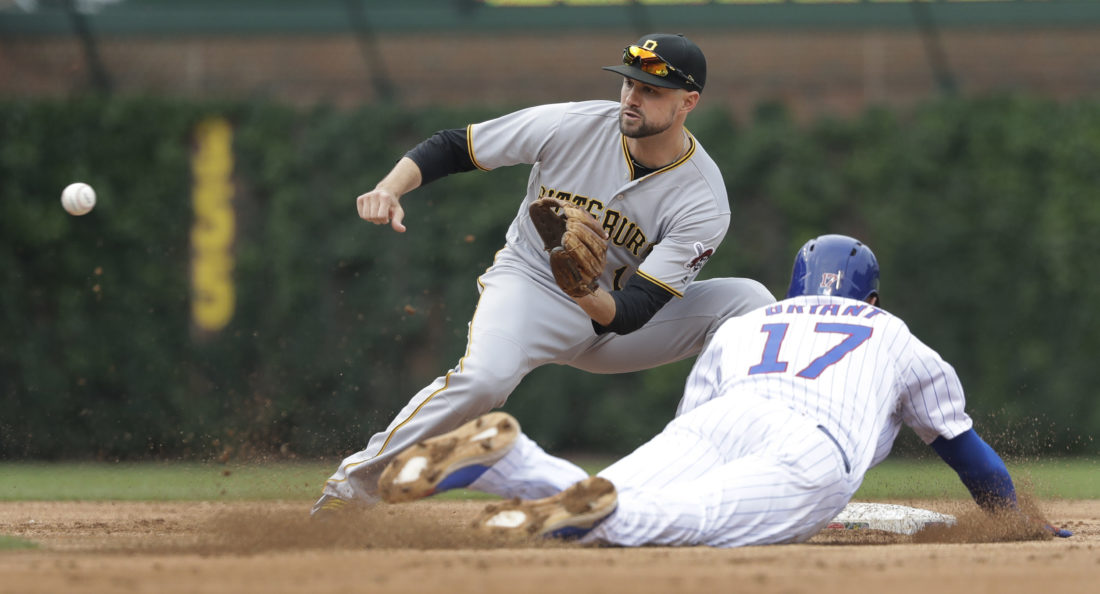 CHICAGO — Kris Bryant could feel his heart pumping for his first at-bat because this trip to the plate was like no other for him.

Cubs manager Joe Maddon penciled him in at the top of the order. And that was new territory for the superstar slugger.

Bryant had three hits and scored a run while batting leadoff for the first time in his career, Ian Happ made a spectacular diving catch near the left-field corner to end the game and the surging Chicago Cubs beat the slumping Pittsburgh Pirates 3-1 on Friday.

Jitters aside, Bryant looked comfortable in an unfamiliar spot and helped the Cubs win for the 10th time in 12 games. He went 3 for 4 with singles in his first three at-bats and scored in a two-run first inning.

Bryant has a seven-game hitting streak and is 13 of 31 in that span. But Maddon decided to put him in a “different seat for the day” because he hadn’t been driving the ball with his usual force.

“What I did see was a different (more upright) stance at the plate, approach at the plate,” Maddon said. “That’s what I did see. I thought he looked really comfortable on defense. … And that might have been the residue of the at-bats.”

Bryant said he wasn’t too surprised when he got the text from Maddon in the morning. After all, his manager likes to shuffle the lineup.

“I figured it would happen at some point this year,” Bryant said. “I wasn’t completely surprised. But he likes to change things up and I hadn’t been playing the way I wanted to lately.”

Happ made three terrific catches , sprawling out to grab Josh Harrison’s drive toward the corner against Pedro Strop with a runner on third and two out in the ninth. He also possibly saved a run in the third with a tumbling catch on Corey Dickerson’s shallow fly with runners on first and second. Happ made another neat grab in the sixth when he raced back and lunged to snag Colin Moran’s smash.

“He probably should have got the save along with Strop today,” Pirates manager Clint Hurdle said.

Mike Montgomery (2-1) went six innings , giving up one run and seven hits, in his third start with Yu Darvish on the disabled list because of right triceps tendinitis.

Ben Zobrist drove in two runs. Jason Heyward had two hits and a run, and Strop got the final four outs for his first save in two chances. He gave up a leadoff single to Colin Moran and threw a wild pitch to Jordy Mercer before retiring the last three batters.

The Pirates lost for the 10th time in 13 games, with Chad Kuhl (4-4) once again coming up short. The left-hander gave up three runs and eight hits in 5 1/3 innings, and is 0-2 in his past six outings. Both losses were to the Cubs, making him 1-6 in nine career starts against Chicago.

“He literally saved the game with a couple catches today. Magnificent performance.” — Maddon on Happ.

Pirates: RHP Ivan Nova (sprained right ring finger) appears close to a return from the 10-day DL. Hurdle said the Pirates are “laying out a next step for him” after Thursday’s bullpen session went well. … The Pirates placed RHP Richard Rodriquez (right shoulder inflammation) on the 10-day DL and recalled RHP Dovydas Neverauskas from Triple-A Indianapolis.

Cubs: SS Addison Russell (bruised left middle finger) was out of the lineup for the fourth straight game, though he entered as part of a double switch with two out in the eighth. … LHP Drew Smyly can “see the light at the end of the tunnel” after a 25-pitch batting practice session on Friday. “Today was a big step for me,” he said. Smyly hasn’t pitched since 2016 with Tampa Bay and had Tommy John surgery as a member of the Seattle Mariners last July. He also threw BP at the team’s facility in Arizona this week, and he expects to get in a few more sessions as well as some simulated games before going on a possible rehab stint early next month.

Pirates: RHP Nick Kingham (2-2, 4.03 ERA) looks to bounce back from a loss at St. Louis in which the Cardinals’ Michael Wacha took a no-hitter into the ninth.