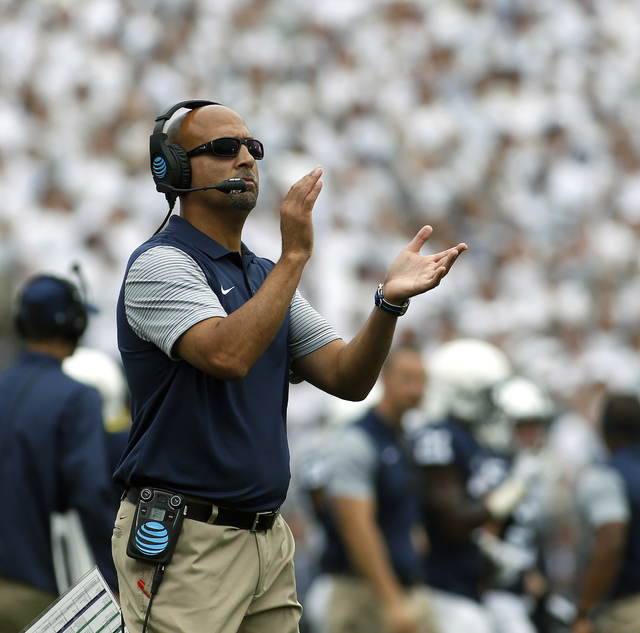 PSU coach James Franklin cheers on the sideline during an NCAA football game.

“The stadium is chanting, ‘Fire Franklin, fire Franklin,'” the coach said Thursday during a visit to Altoona.

Hard to believe, but that was less than two years ago, and Penn State was coming off a 49-10 loss at Michigan the previous week.

Given PSU’s remarkable success since then — beginning in the second half of that comeback victory over Minnesota in overtime — it seems like eons ago.

Franklin has overseen perhaps the most incredible turnaround in college football history with the Nittany Lions, and he discussed how it happened and what it’s meant to him during a Bishop Guilfoyle Catholic High School athletic function at Park Hills Golf Club.

“I am very proud of what we’ve been able to accomplish in a very short period of time,” the coach said.

Franklin is one of the most positive people you’ll ever meet — that’s even No. 1 in his often-cited list of four core values — and he told the BG crowd that tuning out the criticism and staying positive was a big key to Penn State’s turnaround.

And now, a mere 18 months after those “fire Franklin” chants?

“One of the things I’m most excited about is just the buzz,” Franklin said.

Franklin had to endure tough times and criticism his first 2 ¢ years at PSU, but now he’s in a situation where he’s being universally praised for his efforts. He was asked Thursday how coming full circle in that regard has changed his life and perspective.

“I think what happens, in some ways that experience early on is a blessing now, because if you’re going to listen to the criticism, you’ve got to listen to the pats on the backs and the cheers,” the coach said. “I think it humbles you, I think it gives you perspective, it grounds you.”

One thing Franklin will not do — and this is no surprise to anyone who’s ever been around him and understands his M.O. — is rest on his laurels because of all the praise he’s now getting.

“If you spend the time kind of enjoying the pats on the back, then you’re not working to continue to build and continue to grow,” he said. “And although we’ve done some good things, we’ve still got a long ways to go to compete with the programs that we want to compete with.

Not much has changed for the Franklin family, the coach said, through all the success of the past two seasons. Franklin said he and his wife, Fumi, and daughters, Shola and Addy, “don’t go out a whole lot as a family,” but you can bet that when he does, he’s not hearing anything but praise and congratulations from Penn State fans.

“We’ve adjusted extremely well,” Franklin said of his family’s time in Happy Valley. “You’ve got to remember, I have a coaching family. We’ve lived all over the country, and they’ve adjusted. They think this is normal. This is all we know as a family.

“This community is great for raising kids and allows me and my wife to be the type of parents that we want to be and allows our kids to be involved in a lot of different things.”

During the Q&A session of Thursday’s event, Franklin was asked about the PSU-Pitt rivalry and what that opponent means. The coach has consistently avoided emphasizing the importance of any single game or opponent over another, including his well-publicized comment after last year’s win over Pitt.

“For us, this was just like beating Akron,” he said then.

That was widely viewed as a slight against Pitt. But in Franklin’s mind, he truly does believe in trying to treat each game the same so that his players understand the importance of being prepared for every opponent.

Franklin often repeats the name of the upcoming opponent many times in interviews or on social media, showing his singular focus. So, after getting asked about Pitt, the Lions’ week two opponent this year, he closed his remarks in typical fashion by stressing the opener against Appalachian State.

“My wife, my daughters, my family and App State, I could care less about anything else,” he said.