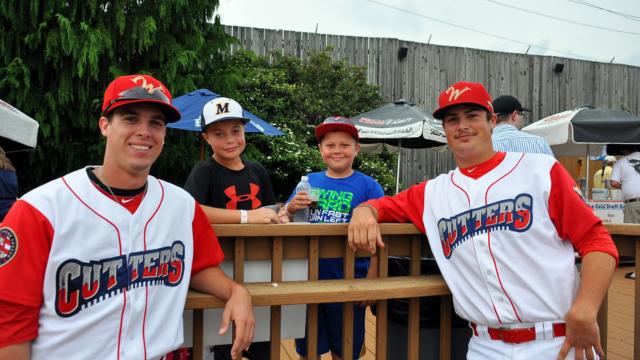 WILLIAMSPORT — The Williamsport Crosscutters and Fox Sports Williamsport (WLYC) have jointly announced an extension of their partnership agreement for the 2018 season.

The agreement continues the association that began in 2008 with the company (formerly ESPN) and assures that, for the eleventh consecutive season all Crosscutters games, both home and away, will be heard on Fox Sports Williamsport frequencies 1050AM & 92.7FM. All broadcasts are also available online at www.crosscutters.com and can be accessed via any device.

“The Cutters are excited to continue our association with our flagship station,” stated Cutters VP of Marketing & PR Gabe Sinicropi. “It’s extremely important for us to have all of our games available for fans locally as well as across the country who annually follow the Phillies prospects in Williamsport. The Fox Sports crew continues to provide top-notch coverage.”

Todd Bartley, General Manager of Fox Sports Williamsport will continue his role as the lead play-by-play voice on home broadcasts where he will again be joined Ian Catherine who will handle the duties solo when the team is on the road.

All Cutters ticket plans and single game tickets are now on sale and can be purchased online at Crosscutters.com/Tickets, by calling the Cutters Hotline at (570) 326-3389 or in-person at the Cutters box office.

The Williamsport Crosscutters have announced a partnership with LiveSource to utilize fan engagement in a mobile auction platform for the 2018 season. The Cutters will utilize the LiveSource mobile app to offer fans opportunities for their charitable jersey and cap auctions.

The LiveSource app will provide a better experience for fans bidding at the ballpark, as the entire process can be done via a smartphone or tablet. Fans who are not in attendance will the opportunity to bid through the app as well, eliminating the standard of in-person bidding. Payment, winning, bidding and delivery is all facilitated on mobile devices through the LiveSource app and website.

“We are excited about our new partnership with LiveSource,” stated Gabe Sinicropi, Vice President of Marketing and Public Relations for the Williamsport Crosscutters. “LiveSource will make it easier and more convenient for fans to take part in our game-used jersey and cap auctions without leaving their seat. In addition, it will give fans from all over the country an opportunity to bid on these special items which we think will mean a larger donation to our charity partners. With the LiveSource app in place, we anticipate that we will offer Cutters fans more and varied auction opportunities in the future.”

“We are thrilled to partner with the Crosscutters organization” says Scott F. Levin, CEO & Founder of LiveSource. We couldn’t be more excited to help the organization increase auction sales and the excitement felt by their fans throughout the season. Get ready Williamsport fans, the Crosscutters can now unleash thrilling opportunities in a moment anytime through the LiveSource app.”

The LiveSource software is simple and easy to use, and handles the entire sales process from posting to payment to arranging delivery.

Fans can download the app today for iOS and Android.

Coming June 13 – Along with

The Williamsport Crosscutters will be holding the annual Meet the Cutters reception, Wednesday, June 13 from 5:00pm-7:00pm at BB&T Ballpark. Admission is free for all fans.

Cutters manager Pat Borders and the entire squad of Williamsport Crosscutters players and coaches will be on hand to meet and sign autographs for all in attendance. Fans will also be entertained by Cutters mascot, BOOMER.

There will be prize giveaways along with complimentary hot dog. All Cutters ticket plans as well as Opening Night tickets will also be available along with a new array of Cutters merchandise. Fox Sports Williamsport, the Cutters flagship station, will be broadcasting live from the event.

Also going on concurrently with Meet the Cutters, will be Hump Day Happy Hour on the UPMC Susquehanna Logger’s Landing presented by Boom City Brewing Co from 5-8pm. The happy hour event is one of ten taking place at the ballpark this summer and features $1 hot dogs and $1 drafts along with DJ & karaoke entertainment with Double You Tunes.