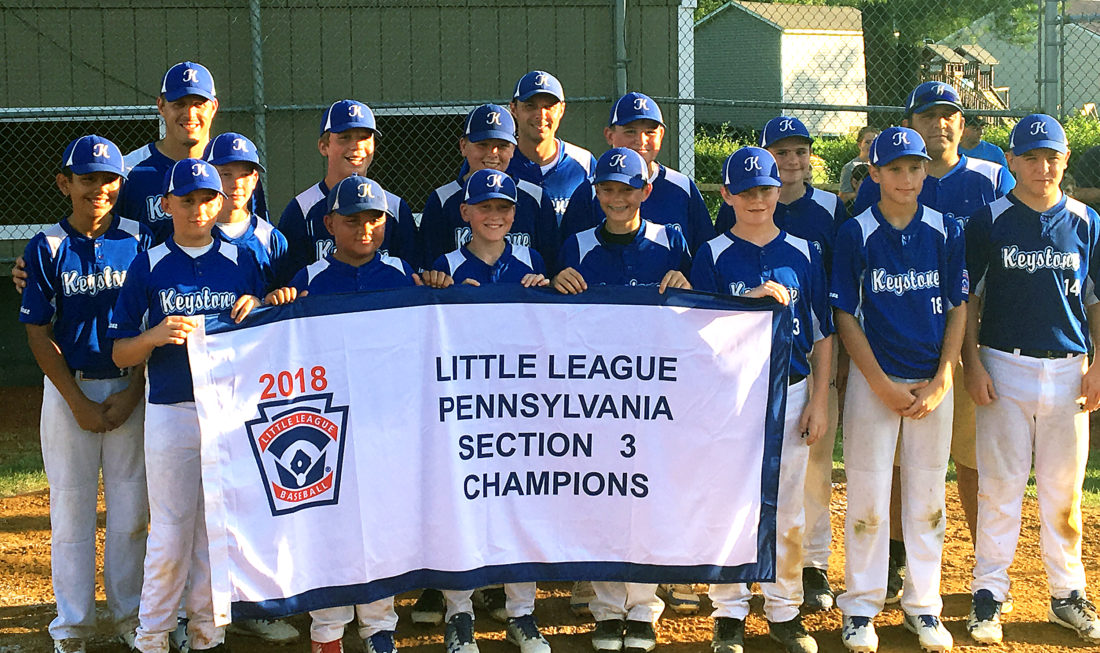 The Keystone 10-12 All-Stars Little League Baseball team poses with their banner after winning the Little League Pennsylvania Section 3 Championship. They defeated Pottsville, 12-0 to advance to the Pennsylvania state tournament. (The Express/Sarah Smeltz)

BEECH CREEK — Keystone’s lineup is bullying opposing pitchers, and they’ll need to continue that momentum as its competition-level increases.

In the section 3 final, Keystone blanked Pottsville, 12-0 in four innings to capture the sectional crown and advance to the state playoffs beginning this Sunday.

The win increased Keystone’s tournament record to 8-0, and they became the sixth Keystone Majors team in history to compete for a state championship.

“They’re such a tight group,” coach Pat Johnson said. “They play for each other, they’re selfless and they’re like 13 sons to me. I love them all.

“I’m just so proud of them as a group, because they did something pretty special, that’s tough tp do.”

“He pitched another good game,” Johnson said of Gabe. “The biggest thing he’s improved on is he’s really hitting his spots this year, which is a huge part of getting kids out.”

“Braylen’s on a whole new level now,” Johnson said of Corter. “You just can’t get him out. He has an unbelievable future in this game if he wants it.”

Connor Foltz hit 2-3 with a two-run homerun in the third.

“He’s a kid that’s not affected by the moment,” Johnson said of Foltz. “He sees a pitch and is looking to drive it. I couldn’t be more proud of him as well.”

Gabe Johnson struck out two batters in the first before leadoff hitter Braylen Corter cracked a line drive homerun in the back half of the inning. The solo blast set the tone early for Keystone.

“Starting off with a leadoff homerun is always good,” Corter said.

Keystone extended its lead, 3-0 in the first after Levi Schlesinger scored following a fielding error and Connor Foltz scored on a wild pitch.

Later in the third, Corter launched his second home run of the game, putting Keystone ahead, 9-0.

“I guess I’m seeing the ball well,” Corter said. “I just try to put the bat on the ball and it’s going out.”

After Wyatt Kramer’s RBI triple, Connor Foltz smacked a two-run bomb to give Keystone a 12-0 lead.

“I was just waiting for my pitch and he gave it to me,” Foltz said.

Given his familiarity with Blaine W. Kunes Memorial Park, Foltz knew on the initial contact that the ball was leaving the field.

“We always practice here, so whenever I hit I just know [it’s going out],” Foltz said.

Keystone out-hit Pottsville in the game, 8-2.

Keystone’s win clinched them a berth in the state playoffs beginning Sunday in Berwick. Representing district 12 and section 3, Keystone will face off in a eight-team tournament with the goal of advancing to the Mid- Atlantic Regional.

“It’s very exciting,” Gardner Fravel said of competing for a state championship. “I’m just ready to go back to states, to try to bring it back home and go to Bristol, Connecticut.”

Head coach Pat Johnson knows it’s an achievement to advance this far through the summer.