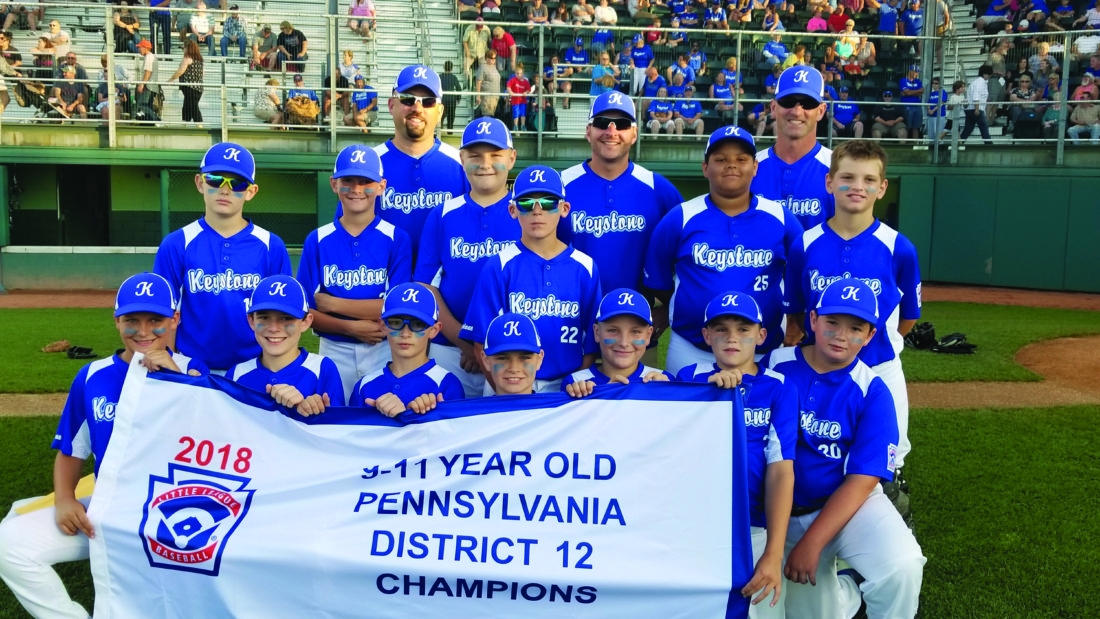 WILLIAMSPORT — Keystone pitcher Hart Fletcher made sure to bring his A-game in the district championship.

Fletcher fanned 12 batters to lift Keystone to a district title win, 5-2, over the Loyalsock All-Stars.

“The team played well,” Keystone head coach Brad Mahoney said. “Loyalsock played us a good, tough game and limited their mistakes. We didn’t make any mistakes and had a great pitching outing by Hart Fletcher, and Bryce Brungard to finish it.”

“And we got some key hits,” he added. “Our bats weren’t as hot as they have been, but you have those days.”

Keystone added its first run of the game following a Loyalsock error. After Hart Fletcher struckout on a wild pitch, Caleb Mahoney motioned off third base before being caught in a rundown with the catcher. As Mahoney hustled back to third, Loyalsock’s Jeremiah Johnson threw the ball over Drake Dupoint’s head, allowing Mahoney to easily score to put Keystone ahead, 1-0.

“I told Caleb to run, not thinking the catcher would even look at him,” Mahoney explained. “He just made a hustle play, the catcher had a bad throw and it got us on the board early.”

“Cole Bailey and Hart Fletcher each had two deep doubles, and that’s what we’ve been seeing all year from those guys,” Mahoney said.

In the fifth, Keystone pitcher Hart Fletcher struckout the side. It was his second three-strikeout inning of the game.

“Hart’s a fantastic pitcher,” Mahoney said of Fletcher. “He’s been doing it all year for us. He just has the experience and he knows how to pitch. He’s got a good curveball, and fastball, and it keeps the boys off-balance when he’s in there.”

Keystone pitcher Bryce Brungard made a relief appearance in the fifth, and forced Loyalsock’s Drake Dupoint to ground out to secure the 5-2 win.

“We’re very proud of the boys,” Mahoney said. “They’re practicing everyday and it’s been 95-plus degrees. They’re working hard and no team in the district worked harder than they did. They got what they deserved today.”

Keystone returns July 13 in the section 13 tournament against a team and location soon to be determined.