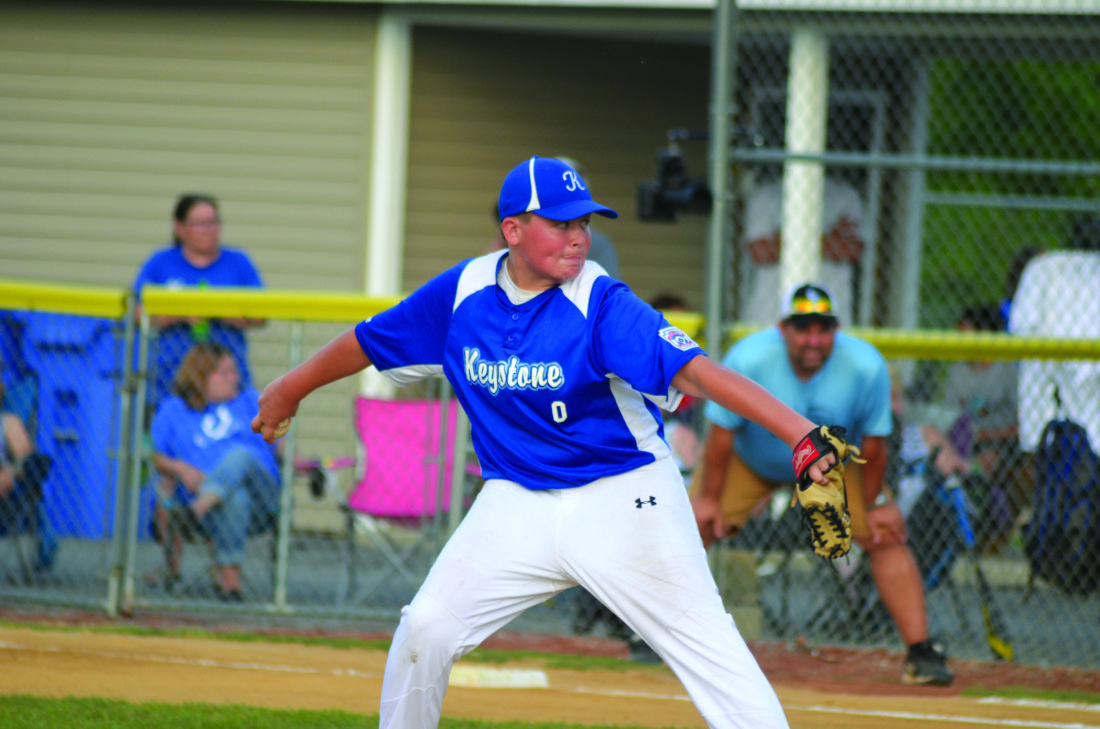 BEECH CREEK- Keystone showed on Sunday that even when not at its best they’re capable of beating tough teams.

Keystone recorded nine hits in a 7-3 win over Snyder County in the winners’ bracket final.

“We scrapped out a win,” coach Pat Johnson said. “I didn’t feel like we played as well as we can play. I think all of our hitters were chasing pitches out of the zone, getting themselves behind in counts. But we got a couple of hits when we need to.”

Keystone’s Braylen Corter recorded a leadoff single in the first before Snyder County’ s Garrett Leitzel struck out two of the next three Keystone batters to exit the inning unscathed.

Levis Schlesinger replicated Leitzel in the back half of the inning and fanned two batters as Keystone retired the side.

After Gavin Burnell doubled into center field, Braylen Corter supplied a two-run double to put Keystone ahead, 2-0, in the second.

Snyder County’s Caden Wolfey cut Keystone’s lead, 2-1, after scoring on a wild pitch in the fourth. Later in the inning Keystone took advantage of Snyder County’s aggressive base running and turned a double play after throwing out the runner at home to end the inning

“They just kind of anticipate on plays like that they might need to catch it and just go home with it,” Johnson said .

PLAY(S) OF THE GAME

Keystone’s known for its hitting– but their solid defensive play is seldom recognized.

After turning a double play in the fourth to prevent Snyder County from tying the game– they turned another in the fifth when Gabe Johnson caught a line drive at first then touched the base for the third out of the inning.

“They were huge,” coach Pat Johnson said of the double plays. “We just trust our fielders are instinctive enough that when that happens they know exactly what they need to do.”

STAR OF THE DAY

Braylen Corter is lighting up pitchers at an alarming rate. Keystone’s No.1 slugger hit 3-4 with 4 RBIs. He was a triple away from the cycle.

He gave Keystone breathing room in the sixth when he launched a two-run bomb, extending Keystone’s lead, 7-1.

“The pitcher threw another high one, and I just tried to put it somewhere and it went out,” Corter said of the home run.

“I’ve been seeing the ball well,” Corter explained. “I just have to keep doing what I’m doing, I guess, and see how it goes.”

Corter’s delivered in every game this postseason– and Keystone’s undefeated record can be chalked up to it.

“I don’t think some of these games go the way they do without Braylen Corter,” Johnson said. “I think he’s an incredible athlete and an incredible kid.

“He’s a team-athlete. He has no ego and I just can’t say enough about him.”

Gabe Johnson is the team’s ace on the hill– but Keystone used Sunday’s game to develop some of its inexperienced pitchers.

Foltz entered in the sixth and allowed two runs, but secured the 7-3 victory for Keystone.

Johnson said the plan was to play Fravel and Foltz in front of familiar faces in Beech Creek.

“We wanted to get them out there on their home field, where they’re comfortable, and give them some time,” Johnson said. “All in all, I think they came out and did what they needed to do.”

Keystone gets an off day today, but returns Tuesday to face the winner of Snyder County versus Pottsville. A win sends Keystone to the state playoffs in Berwick.