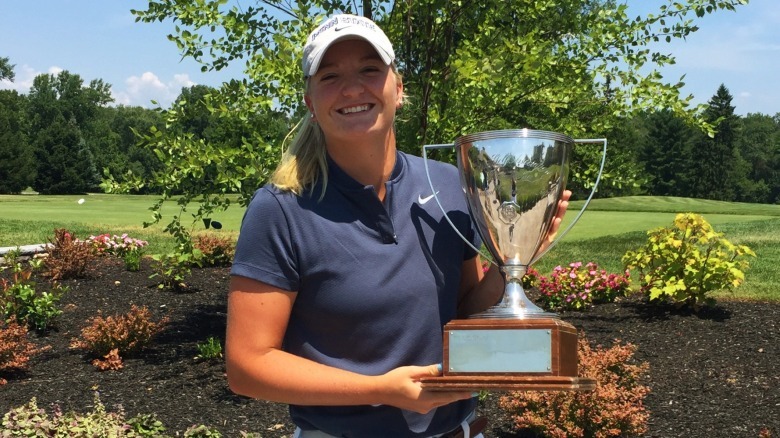 In the championship match, Basso didn’t lose a hole opening with a birdie at the first and never looking back cruising to the 25-hole victory in the 36-hole contest. The Downingtown, Pennsylvania native secured five birdies and an eagle with just one bogey to record a new personal best 66 during the opening 18 holes of the match.

Three more birdies including back-to-back at six and seven during her second 18 of the morning clinched the contest earning the senior her second-consecutive match play championship. Basso cruised to victories of 8 and 7 and 5 and 4 earlier last week to earn a spot in the semifinals where she defeated Katie Edelblut 3 and 2 in her closest match of the tournament before her dominating performance on Friday morning.

“My wedge play and putting really helped me accelerate through my matches all week long,” commented Basso. “I kept giving myself a chance at birdie with my approach shots and was consistently able to convert them with my putting.”

The Women’s Golf Association of Philadelphia is the oldest women’s golf association in the United States and has grown from its original four members in 1897 to 91 Member Clubs today. Penn State ties also run deep within the organization as former Penn State women’s golfer Laura Hammond ’99 serves as Executive Director.

“Playing in Women’s Golf Association of P events is always special because of its rich history,” mentioned Basso. “Philadelphia is a very competitive area for golf and it’s nice to play against players of all ages, some of whom have had long and successful careers in amateur golf.”