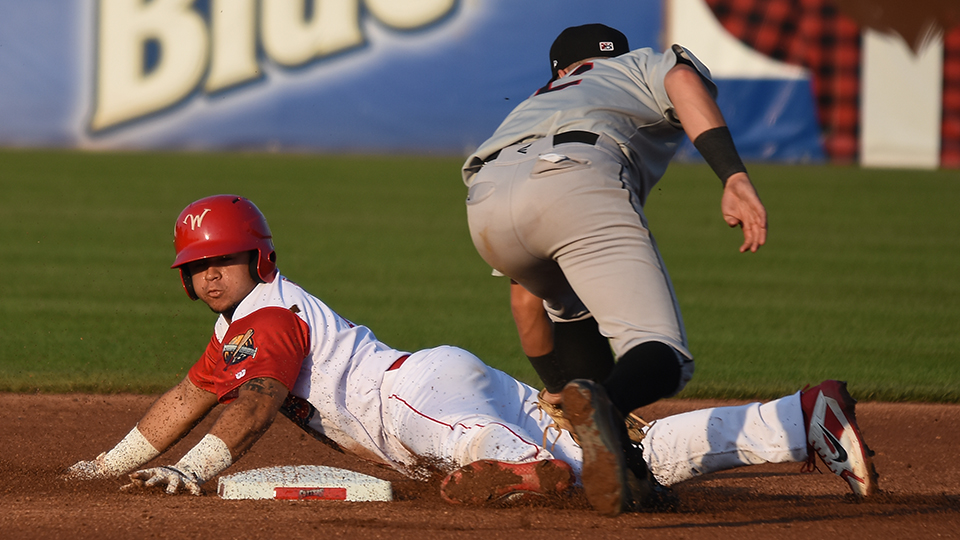 McArthur got off to a quick start in the bottom of the 1st inning, retiring the Cyclones in order, using a pair of ground outs and strikeout to do so, on just nine pitches.

The right-hander out of Mississippi struck out two more in the bottom of the 2nd inning, working around a Ross Adolph two-out single, to toss and 2nd scoreless frame.

Rafael Marchan came to the aid of his pitcher in the bottom of the 3rd inning, after McArthur led off the inning by walking David Miranda. With one away in the inning, Miranda took off for 2nd base, only to be thrown out by Marchan for the 2nd out, helping McArthur to 3rd scoreless frame.

The Crosscutters, who had left four runners on base through the first three innings were finally able to cash in with runners on base in the top of the 4th inning. Ben Aklinski led off with a single and Matt Kroon drew a one-out walk to set up Jesus Henriquez’s two-run triple down the right field line, giving the Cutters a 2-0 lead and Henriquez his 8th and 9th RBI of the season.

McArthur responded with a shut-down inning in the bottom of the 4th, striking out two more Cyclones hitters. It was the final inning for McArthur, who finished the afternoon, with four shutout innings, allowing one hit and a walk while striking out five.

Things got interesting for the Crosscutters in the top of the 5th inning, with Rafael Marchan at 1st base, Ben Pelletier lined a Campusano offering into center field, Anthony Dirocie went into a slide to attempt to catch the ball but came up empty, having the ball get behind him.

Marchan scored easily from 1st base, as Pelletier raced around the bags, getting the wave around 3rd from skipper Pat Borders. Pelletier was thrown out at the plate on a good relay throw, denying him of an inside the park home run.

The triple gave the Cutters a 3-0 lead and gave Pelletier his 15th RBI on the season.

Oscar Marcelino entered in the bottom of the 5th inning, and struggled to find the strike zone, walking the first batter he faced before giving up a triple to Ross Adolph to right-center, plating the Cyclones 1st run. With one out, David Miranda scored Adolph with a sacrifice fly to left.

In all the Cyclones plated two runs on two walks and hit against Marcelino, who struck out two, in his only inning of work, leaving the Cutters with a 3-2 lead after 5 innings of play.

Randy Alcantara entered in the bottom of the 6th inning, working around a double, to work a scoreless frame and keep the Cutters ahead at 3-2.

In the top of the 7th inning, Pelletier nearly cleared the wall in left, banging a run-scoring double that chased home Madison Stokes with two outs to advance the Williamsport advantage to 4-2. It was the 16th RBI of the season for Pelletier.

Randy Alcantara worked around a single in the 7th inning, striking out a pair before retiring the Cyclones in order, using another strike out, in the bottom of the 8th inning.

Pelletier wasn’t done having an effect on the game, in the bottom of the 9th inning, with a runner on 2nd base, Adolph skied to shallow left, along the line. The Cutters left field sprinted in and went into a fill dive to make the catch for the 2nd out.

Alcantara struck out Hayden Senger for the final out, slamming the door on his second save of the season as the Cutters avoided being swept in Brooklyn.

The Crosscutters head back home to start a six-game homestand tomorrow night, with the first three games coming against the Batavia Muckdogs. First pitch is scheduled for 7:05 p.m. at BB&T Ballpark.

Cutter Carvings: The was the first for the Cutters in Brooklyn since July 5, 2012…Danny Mayer recorded his third, three-hit game of the season, finishing 3 for 4 with two doubles… Five different Crosscutters finished with multi-hit performances.