Asia-Pacific tops Caribbean in 9 innings in LLWS first round, 4-2 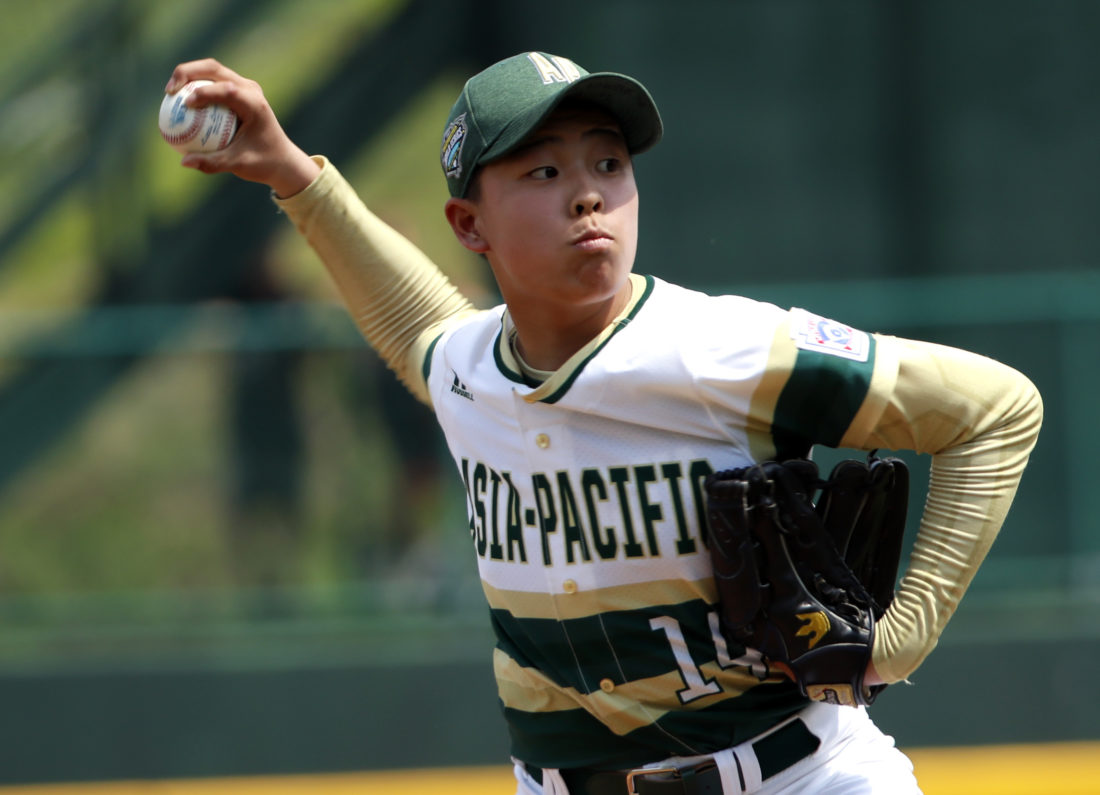 WILLIAMSPORT — Caribbean lost the lead late in a 4-2 defeat to Asia-Pacific on Thursday. The game was tied at two with Asia-Pacific batting in the top of the ninth when Ji Hyung Choi was hit by a pitch, driving in a run.

Asia-Pacific evened things up at two in the top of the sixth inning when Asia-Pacific scored one run on a stolen base.

Ji Hyung was the winning pitcher for Asia-Pacific. He allowed one hit and zero runs over four innings, striking out seven and walking zero.

Victor Cartagena took the loss for Caribbean. He went one inning, allowing two runs on one hit and striking out one.

PLAYS OF THE GAME: In top of eighth inning in a tied game on a passed ball that didn’t get too far away, Caribbean catcher John Lopez hustled back to the plate to tag out Gi Jeong Kim for the second out and save a run. A batter later, Yeong Hyeon Kim was walked and sprinted around first like he had an extra base hit, trying to draw the attention of the catcher so Shoo Hoo Choi, who was at third base, could score. This didn’t work. Second baseman Angel Vazquez smartly and quickly threw home to Lopez who made a nice tag for the third and final out to preserve the 2-2 game.

SOUTH KOREA PLAYER OF THE GAME: Catcher Gi Jeong Kim. He caught the entire nine innings and picked up three of his teams six hits, going 3 for 5 with two RBIs. Pitchers Yeong Hyeon Kim and Ji Hyung Choi each deserve an honorable mention. Kim, the starter, threw 4 2/3 innings of three-hit ball and allowed just one earned run. He struck out an impressive 13 batters, including the first five he faced to start the game. Choi pitched four innings of relief, earning the win, and allowed just one hit while striking out seven.

PUERTO RICO PLAYER OF THE GAME: Pitcher Eric Rodriguez. The hard-throwing righty tipped his hat to cheering Caribbean fans after 5 1/3 innings of no-hit ball, walking three and striking out eight on 88 pitches. Rodriguez allowed just one base runner to reach third and that was thanks to back-to-back passed balls.

After a hitless 3 1/2 innings and a combined 12 strikeouts, the Puerto Rico bats began to put the ball in play. Carlos De Jesus first reached on a dropped third strike and pinch hitter Leonel Gomez reached on a fielder’s choice and after a challenge by Puerto Rico manager Carlos Texidor, De Jesus was ruled safe at second, putting runners on first and second with no outs. After a strikeout, pitcher Eric Rodriguez beat out an infield single that was initially ruled out before a challenge overturned the call. South Korea then threw home as De Jesus barely beat the tag at the plate to make it 1-0. Next at-bat, pinch hitter Luis Rivera blooped an 0-1 single to shallow left field, scoring Gomez to make it 2-0.

South Korea stopped a two-inning scoring drought when it pushed two runs across the board in the top of the ninth that proved to be the game-winning runs. After the bases were loaded with one out, the Asia-Pacific champions struck out for the second out, but it tallied two runs with a hit batter and Jun Woo Lim came across for the second run on a hard-hit grounder that the shortstop couldn’t handle. Puerto Rico got the third out on the play, though, when Jae Hyeok Lee was tagged out at the plate.

BEST EFFORT: Puerto Rico catcher John Lopez saved two runs in the top of the eighth inning with back-to-back tags at the plate.

FLASHING LEATHER: In a game with not too many balls put into play, there wasn’t a lot of opportunity for impressive defensive plays, but in the top of the seventh inning with two outs and a runner on first in a tied game, Puerto Rico right fielder Luis Rivera made an impressive basket catch with his outstretched glove on a dead sprint to end the inning.

WHAT THE ADULTS SAY: “Even though it was 2-0, I never even think about losing the game. I thought we had a chance to overcome and it worked in the top of the sixth and we started to get some hits,” South Korea manager Ji Hee Su said through an interpreter. “Even players believe we can overcome and it finally worked.”

WHAT THE KIDS SAY: “I was thinking I’d like to get at least one run. The most important thing is the first run, so we focused on that and it worked,” South Korea catcher Gi Jeong Kim said through an interpreter.