Japan walks all over Europe-Africa, 11-1, in opening round of LLWS 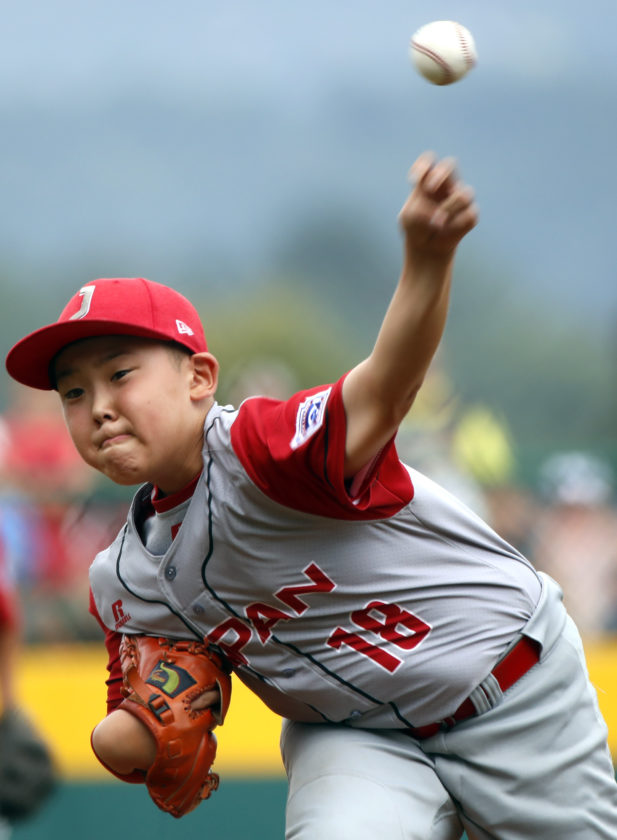 WILLIAMSPORT — Japan ran off with the lead late in the game in an 11-1 victory over Europe-Africa on Friday. The game was tied at one with Japan batting in the bottom of the fourth when Kenji Takada singled on the first pitch of the at bat, scoring two runs.

Japan secured the victory thanks to eight runs in the fifth inning. Shinji Furusawa, Yuya Ito, Kenji, and Masato Igarashi all contributed in the big inning with RBIs.

Europe-Africa got things started in the first inning when Ronald Vizcaino singled on a 3-0 count, scoring one run.

Japan evened things up at one in the bottom of the second inning when Yuya singled on the first pitch of the at bat, scoring one run.

Japan notched eight runs in the fifth inning. The rally was led by singles by Shinji, Yuya, Kenji, and Masato.

Shisei Fujimoto was the winning pitcher for Japan. He allowed five hits and one run over five innings, striking out ten and walking zero.

Juan Salazar took the loss for Europe-Africa. He surrendered three runs on seven hits over three and a third innings, striking out four and walking zero.

Japan had 14 hits in the game. Kenji, Yuya, and Masato each managed multiple hits for Japan. Masato, Yuya, and Kenji each managed two hits to lead Japan. Japan didn’t commit a single error in the field. Masaumi Ikeuchi had ten chances in the field, the most on the team.

PLAY OF THE GAME: It looked like it was just a routine single by Japan’s Daiki Tanaka in the bottom of the fourth inning. But when the ball got past the Spain left fielder, it turned into a game-changing play for Japan. Takumi Nakata scored first. And when the throw to the plate went all the way to the backstop, Yudai Yuasa followed with the second run of the inning. The two-error, two-run played stole all of the momentum Spain hard built before a weather delay interrupted the game, and ultimately led to Japan’s win.

JAPAN PLAYER OF THE GAME: Shisei Fujimoto – The little left-hander struggled through a 24-pitch first inning against Spain, including allowing a triple to Lucas Iriarte and and wild pitch which allowed him to score. But after that first inning, Fujimoto was nails. He struck out 10 over five innings, and he retired 12 of the final 14 hitters he faced as he scattered five hits in a complete-game effort.

SPAIN PLAYER OF THE GAME: Lucas Iriarte – The lanky outfielder sent shockwaves through the entire complex in South Williamsport with his ringing first-inning triple which eventually turned into a 1-0 lead. It was momentum the Europe-Africa region champions carried until a weather delay after 3 1/2 innings stunted its strong start.

BIG INNING: Despite a calamitous fourth inning, Spain still trailed Japan only 3-1 entering the bottom of the fifth inning. But Japan ended the game right there. All 11 Japanese batters in the fateful fifth inning reached base with eight of them scoring a run to invoke the 10-run rule. Masato Igarashi drove in the final two runs of the inning with a single to end the game.

BEST EFFORT: Spain starting pitcher Juan Salazar ended up taking the loss on the mound, but for more than half the game he had Japan hitters baffled. Sporting a Bake McBride-esque puff of hair sprouting from his purple hat, Salazar struck out a pair in a clean first inning. He stranded the potential go-ahead run on third in the second inning. And he made a strong play on a comebacker to cut down a run at third base in the third inning.

FLASHING LEATHER: If two-thirds of the Earth is covered by water, the other third may be covered by Spain center fielder Lucas Iriarte. A half-inning after scoring the game’s first run, the galloping outfielder tracked down a blast from Japan’s Masaumi Ikeuchi, reaching up his gloved left hand to snare the ball on the warning track and prevent an extra-base hit.

WHAT THE ADULTS SAY: “I told all the boys to just stay calm. We still have a lot of time,” Japan manager Hiroyuki Takahashi said through and interpreter about falling behind by a run early. “I said let’s get one run scored and let’s do it.”

WHAT THE KIDS SAY: “It’s our first game and I was really nervous,” Japan pitcher Shisei Fujimoto said through an interpreter. “It was a bit of a struggle the first few innings. But my performance got me back into it and I had some good success.”