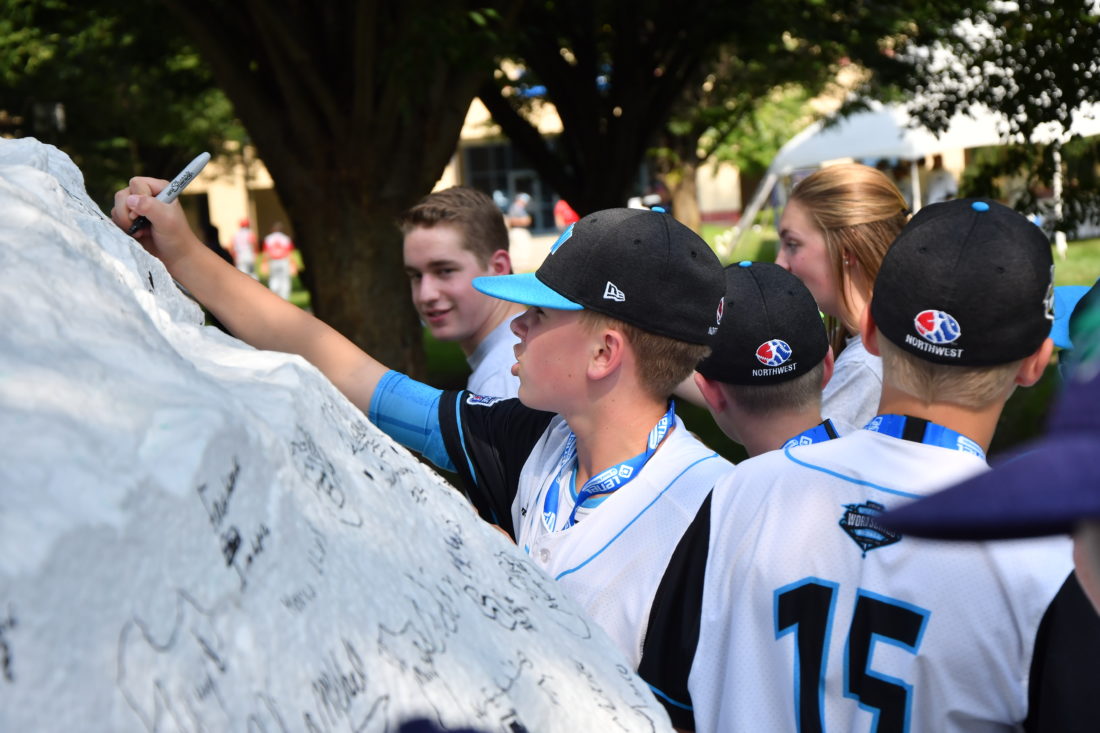 As Jeff Smith and his wife Candice packed their bags, they simultaneously looked up and shared a stunned laugh. They had watched the Coeur d’Alene Little League All-Stars make history a day earlier when they captured the West Regional championship, but it was that precise moment in a San Bernardino, California hotel that the moment really sunk in.

“Do you believe this is really happening?” Jeff asked his wife.

This is a small league that fields 360 players from T-ball through the Junior Division. These 11 and 12-year olds might be from a small town but they are achieving something huge.

“There’s a lot of pride that we can stick a flag in the ground for Northern Idaho. We are proving that you don’t have to be from a metropolis or a league that has huge numbers. A little team can do it, too, if you put the work in,” Coeur d’Alene manager Sean Cherry said. “There have been a lot of sacrifices. They set a goal and bought into it. The satisfaction is immense that they set a goal and went out and achieved it.”

Greatness often comes with a price tag, but this team paid it nearly every day. Two days before last Christmas, these West champions slogged through snow as they approached the local indoor baseball facility. Nobody was forcing these athletes to take all those extra swings, grounders or throws. This was their mission.

If Coeur d’Alene fell short of reaching the Series it would be from a lack of preparation. All that work has paid huge dividends and Coeur d’Alene is setting quite an example.

“The kids were prepared for this moment. They have been taught well and when they stepped off the bus in San Bernardino they were ready to go,” Coeur d’Alene Little League president Jeff Smith said. “We have six majors teams and we took a developmental approach several years ago, so when it’s time for the postesason we have kids that are ready to play baseball and when you narrow it down to 12 or 13 kids who are ready to devote their summers to Little League, that makes a world of difference. Being such a small community, the parental support and the volunteer support and the activism is huge. We don’t have to be a league of 1,000 kids to make this happen. It’s pretty special. It’s really special to the town.”

Coeur d’Alene has a core group that has played together since 9 and those players have become team leaders. They have set a tone and every player has done his part.

It also helps that Coeur d’Alene has earned past success and remains close-knit. The 2013 team won states and played at the Northwest Regional. The 2001 team was an out from reaching the Little League World Series. Coach Steve Saunders played on a team in the mid-70s that also competed in the old West Region tournament. Former players from all those teams now either have sons playing in the Coeur d’Alene Little League and/or have provided assistance along this year’s journey.

Before leaving Idaho for regionals, many of those alumni talked to this team. They discussed experiences, what the games would be like, how to handle media attention and anything else that might provide help. Just having that advice went a long way and Coeur d’Alene routed Washington 16-6 in its first game. It blasted Wyoming, 13-1 a day later. Montana defeated it, 5-2 in the winner’s bracket final, but Coeur d’Alene fought back, beating Oregon, 8-3 and exacting revenge by blanking Montana, 2-0 in the final. It speaks volumes about the team’s coaching, playing ability and mindset that it made no errors in those five games.

“You look over one day before the tournament started and the 2013 team is playing this team in whiffle ball. Just to have that resource from all those teams was huge for us,” Smith said. “To have those people come back to the program and support the kids and let them know about the experience made it feel for them like they had already been there.”

“The goal was let’s put in a bunch of work and see if have shot at making San Bernardino. We just focused on that,” Cherry said. “We just wanted to try and push ourselves to at least compete. Once we won states, we just didn’t want to embarrass ourselves and then we won a game and it was like, ‘we can compete with these guys. I think just because a lot of states are bigger than us they didn’t realize what we could do, but after the first win it was like, ‘these guys are 12 years old just like we are and we can compete with them.'”

Along this summer-long journey a few letters became taboo. When Coeur d’Alene fought for the state championship in Boise, nobody mentioned ‘SB’ for San Bernardino. Once Coeur d’Alene reached regionals ‘W’ for Williamsport became outlawed. How good it felt than when players and coaches gathered after each championship and screamed those words.

They were screams that could reverberate for years. The echo through not just through the league, but throughout Coeur’ d’Alene. Those screams serve as a reminder that size has nothing to do with attaining something historic.

“It’s the whole community that has made this happen. It’s the coaches and players and volunteers and parents and all those people that played for Coeur d’Alene and have come back to help,” Smith said. “They have definitely created a legacy. That is what makes it so special.”