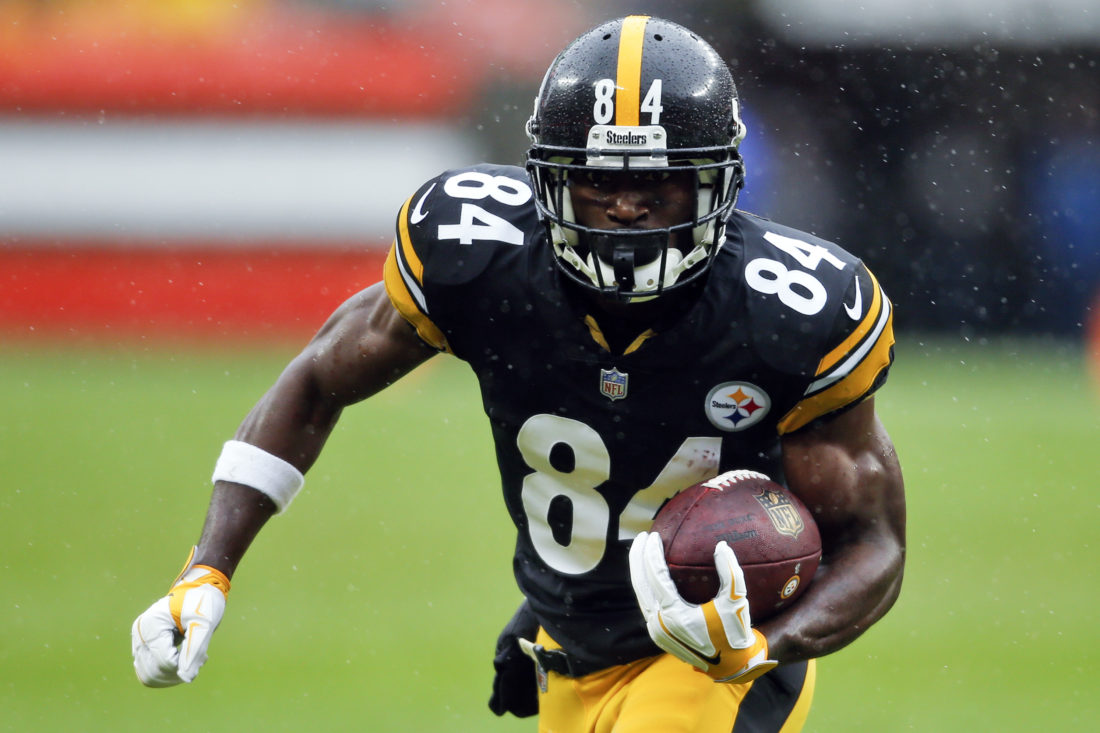 FILE - In this Sunday, Sept. 9, 2018, file photo, Pittsburgh Steelers wide receiver Antonio Brown runs the ball against the Cleveland Browns during the first half of an NFL football game in Cleveland. Brown caught eight passes for 155 yards and a touchdown during Pittsburgh’s 19-13 victory in Kansas City last October. The Steelers host the Chiefs on Sunday. (AP Photo/Ron Schwane, File)

PITTSBURGH — A talented and mobile young quarterback tasked with taking over a playoff team from a veteran.

Yeah, Pittsburgh Steelers star Ben Roethlisberger may know a little something about that.

Asked about his initial impressions of Mahomes — whom Roethlisberger and the Steelers (0-0-1) will get a close look at when Kansas City (1-0) visits Pittsburgh on Sunday — and the 36-year-old sounds impressed and a little wistful at the same time.

“An amazing talent,” Roethlisberger said. “He’s got a big arm.”

And big expectations too. Throwing for four touchdowns in your first season opener — as Mahomes did while lighting up the Chargers on the road in Week 1 — has a way of doing that.

Now all he has to do for an encore is try to help Kansas City win in Pittsburgh for the first time since 1986, nearly a full decade before the 22-year-old was born.

No pressure or anything, though Mahomes isn’t exactly concerned about carrying the weight of his team’s largely forgettable history against the Steelers.

“It’s a brand new season,” he said. “We’ve got a lot of guys that are hungry and want to get better every single week and this will be a great challenge in the early season to kind of get us going.”

Pittsburgh has won seven of the past eight meetings, including a 19-13 victory at Arrowhead Stadium last October that put a pin in Kansas City’s 5-0 start while simultaneously igniting an eight-game winning streak that carried the Steelers to a second straight AFC North title.

Pittsburgh entered that game needing a boost after getting throttled at home by Jacksonville. The Steelers could use another one after an ugly 21-all tie in Cleveland last week in which they turned it over six times and blew a 14-point fourth-quarter lead.

Playing well against Kansas City has rarely been an issue for the Steelers. Neither have home openers. Pittsburgh is 15-2 in season debuts at Heinz Field since moving from Three Rivers Stadium in 2001 and Roethlisberger — who spent part of the week dealing with an achy right elbow — tends to find another gear when in Pittsburgh’s home black jerseys. He’s averaging nearly three touchdown passes per game at Heinz Field since the start of 2014.

Some things to look for as the Chiefs try to end a six-game losing streak in the Steel City while the Steelers try to avoid their worst start since they dropped their first four games in 2013, the last time they missed the playoffs.

KING OF THE HILL

Kansas City wide receiver/punt returner Tyreek Hill piled up 269 total yards in Los Angeles, including a 53-yard catch-and-run touchdown and 91-yard punt return for a score that ended in similar fashion: with Hill flashing the “peace” sign as he traipsed into the end zone.

Steelers linebacker T.J. Watt says older brother Derek — a fullback for the Chargers — offered a brief scouting report on Hill, who has 13 touchdowns of 50 yards or more in 32 games.

So does everyone else. Pittsburgh gave up plenty of big plays last season, allowing 13 passes of more than 40 yards, tied for third-highest in the league. The revamped secondary played well in Cleveland, but that was in the rain against an offense that doesn’t feature a player such as Hill.

“He’s a human video game,” Pittsburgh linebacker Bud Dupree said. “We got to make sure he doesn’t make a lot of explosive plays that he always makes.”

Pittsburgh will play without All-Pro running back Le’Veon Bell for a second straight week while Bell continues to wait to sign his franchise tender. The Steelers hardly missed Bell in Cleveland. James Conner rolled up 192 total yards on 36 touches — both Bell-like totals — and scored twice .

The Chiefs will likely be without star safety Eric Berry for the second consecutive week. He tore his Achilles tendon last season and had returned for summer workouts, but he’s been out since the early part of training camp with soreness in his heel. “Just being cautious with it. It’s a long season,” Kansas City coach Andy Reid said. “That’s where we’re at.”

The Steelers relied heavily on wide receivers Antonio Brown and JuJu Smith-Schuster in Cleveland. Help could be on the way Sunday. Tight end Vance McDonald — sidelined all of training camp with a foot injury — is expected to play. McDonald was productive when healthy in 2017 and caught 10 passes for 112 yards in a playoff loss to Jacksonville.