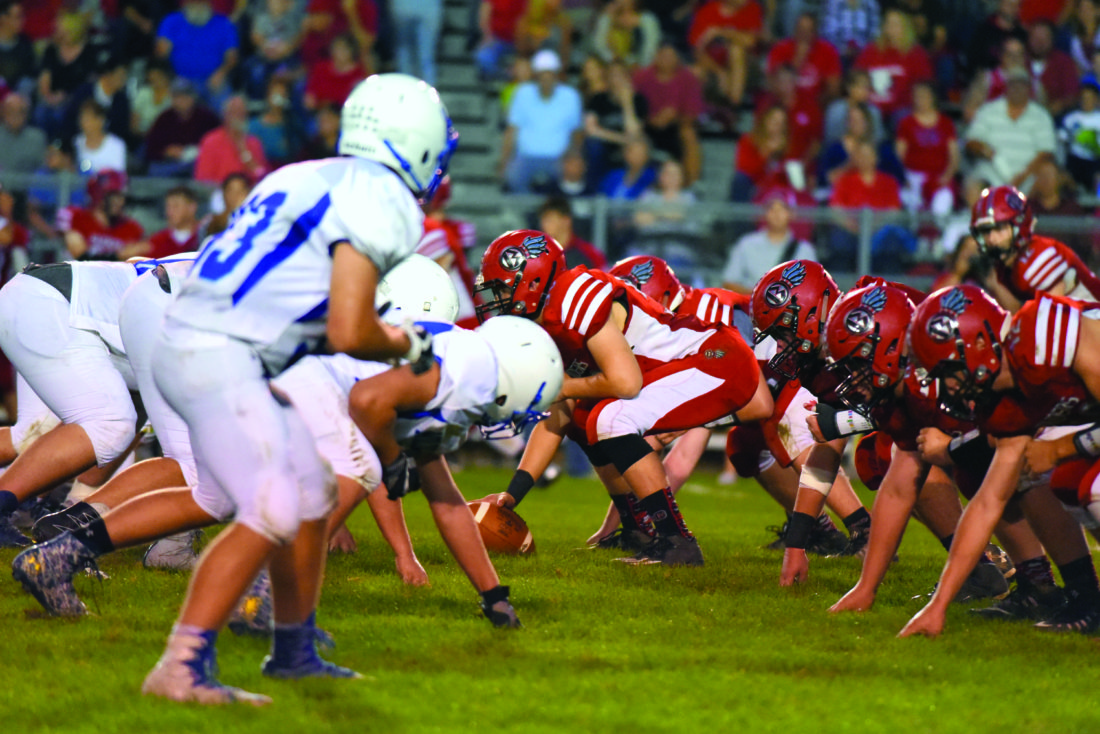 Central Mountain High School and Bellefonte High School line up during their annual rivalry game in the 2017 season. (The Express File Photo/Tim Weight)

I think we all love this time of the year.

And this Friday, we have a high school football rivalry game between the Central Mountain Wildcats (0-3) and the Bellefonte Red Raiders (3-0).

But don’t let those records fool you.

Last season, we approached this game with similar circumstances — Central Mountain entered the game 0-3 and Bellefonte had a 2-1 winning record.

But you know the old saying: Anything can happen in rivalry games — and it did.

The stats flew from both sides, and before you knew it, we were in a triple-overtime thriller between the two rivals. Bellefonte would end up escaping that game with a victory, 34-31.

It was iconic, and is something everybody is thinking about as we approach the renewal of the matchup between the two schools.

At the quarterback position, it was a battle between two seniors, and both had great games.– both in the air and on the ground.

On the Wildcats’ side, you had Austyn Carson who had a stat sheet of 18/30 for 202 yards, two touchdowns and a 88.5 QB rating. On the ground, his numbers continued to marvel piling up 50 yards and punching in another two touchdowns.

For the Red Raiders, you had a star in Dylan Deitrich — Deitrich threw 9/16 for 171 yards with a 93.5 QB rating, and added another 71 yards in the rushing game.

It was an entertaining performance to watch the entire night. We had two kids keeping us on the edge of our seats.

But that wasn’t it.

For Central Mountain, Rocco Stark and Tanner Weaver were sharing rushes — they had a combined 23 touches for a total of 85 yards. The production also continued for Bellefonte with their rushing game. Senior Cade Fortney had an incredible night rushing for 108 yards and two touchdowns — running backs Dexter Gallishaw and Stephen Kutches also collected a touchdown a piece themselves.

Together, both teams combined for a total of 800 all-purpose yards. Central Mountain had a total of 380, while Bellefonte had 420.

And then on top of that, when you look at the scoring summary from that game, neither team separated the other by more than seven points the entire contest — it was an absolute thriller for 60 minutes plus three overtimes.

And here we go again.

And, again, the records and numbers are irrelevant.

But let’s take a look at the analytics anyways, because there’s some things of interest to keep an eye on in both Mill Hall and Bellefonte.

Let’s start out with Central Mountain, a team that I’m having fun paying attention to. And that’s because of this kid Collin Jones, and the strategy that head coach James Renninger has been implementing with him.

The first game against Williamsport, we knew right off of the bat that it would be Jones to be the one to carry the Wildcats. And he’s been effective ever since.

Against the Millionaires, Jones pulled in a crazy 165 yards and three touchdowns. The next week against Lewisburg, he still pulled in a nice statistical performance with two catches for 47 yards. Last week in Shamokin, Jones once again was effective with 65 yards, this time with seven catches showing that Renninger is getting Jones even more implemented into the offense.

That kid is going to be a beast against Bellefonte.

Also pay attention to wide receiver JT Pentz, who has played and still is playing the role of Collin Jones’ Robin to his Batman. He’s been a nice No. 2 wide receiver for Central Mountain who has been producing. Against Williamsport, Pentz would rack in 64 yards on three catches, including a 44-yarder. He was also active against Shamokin, pulling in 54 yards on just three catches. He’ll be an interesting tool for the Wildcats as the double and triple-teams pile up against Jones throughout the season.

Another player to keep an eye on from Central Mountain is quarterback Zane Probst, who has been developing steadily in the first three games. With the exception of the game against Lewisburg where he struggled, Probst put up good numbers against Williamsport and Shamokin.

Probst threw 14/24 for 294 yards and three touchdowns — he also threw an interception. With the struggle against Lewisburg, Probst would also throw two picks. But then in Shamokin, he delivered again with some nice numbers, this time with 141 yards on the stat sheet completing 10/21 passes — but again, there was an interception.

If Probst can become a little more efficient and lessen the turnovers, he’ll become a super-effective quarterback for the Wildcats. And imagine that duo of him and Jones at the wide receiver position.

Keep an eye on Probst and his development, that’ll be interesting to watch as the season progresses — and I look for another breakout game against the Red Raiders.

In the first game against Williamsport, running back Rocco Stark rushed for 110 yards on 16 rushes. Since then, he hasn’t had many touches. I’d like to see Renninger implement him more into the offense like he was against the Millionaires, because Stark could become another legitimate weapon for the Wildcats offense.

And that’s what the Wildcats have — weapons. Despite the 0-3 record.

That’s what makes them so scary in a rivalry game against Bellefonte, a game where anything can happen. The defense concerns me, but with the talent that Central Mountain has on offense and with the game being in Mill Hall, all hell could break loose.

Needless to say, the Red Raiders need to be put on serious upset alert.

But there’s a reason why Bellefonte comes into this game as a 3-0 favorite — these kids can play.

Where should we start?

Let’s start with one of my favorite players this season: Quarterback Kyle Myers, the transfer from West Branch High School. I fell in love with this kid as soon as I heard about him and the story line involving his enrollment into Bellefonte.

He concerned me in the season opener against Jersey Shore, only having numbers of 6/10 with 67 yards and an 80.0 QB rating — he even got pulled out by the coaching staff and replaced with the backup.

But then Myers started delivering, and it all started with him being put back into the game against the Bulldogs in the fourth quarter. There, he would help lead the Red Raiders down the field where they would secure a 17-14 win off of a last second field goal.

After that, the kid has been on fire.

In week two against Huntingdon, a team that was coming off of a dominant 10-win season, Myers lit them up. In the air, he threw 10/18 for 172 yards, one touchdown and an incredible 106.7 QB rating. Myers also hit the Bearcats on the ground as well, rushing for 59 yards.

The next week against Philipsburg-Osceola, Myers was effective again — throwing for three touchdowns on just six completions, and pulled in a video game-like 128.7 QB rating. On the ground, he’d add 67 yards.

This dual-threat quarterback is lethal, and it’ll be entertaining to see how he performs in his first rivalry game against Central Mountain — will he struggle like he did against the rival Bulldogs, or will he be able to handle the pressure this time?

Fun times are ahead.

Another Red Raider to keep an eye on is running back CJ Funk, who was effective last season, and has came into 2018 even more effective — stepping up and replacing the rushing game of the graduating Dylan Deitrich.

He’ll certainly be the biggest threat towards the Wildcats’ defense.

In the season opener against Jersey Shore, Funk lit up the Bulldogs. On 14 carries, he collected a total of 111 yards and would punch in two touchdowns. Against Huntingdon, he wasn’t dominant, but he was still effective — this time in both the rushing and receiving game. He’d collect 32 rushing yards and 20 receiving yards, contributing to a 10-0 upset of the Bearcats.

Last Friday against Philipsburg-Osceola, Funk went right back into domination mode. He walked all over the Mountaineers with an insane 139 yards on just 13 touches, and punched in three touchdowns in a blowout victory.

The pieces of QB Kyle Myers and RB CJ Funk make Bellefonte’s offense explosive, and it could spell pure fun for them against the current state of the Wildcats defense.

And speaking of defense, Bellefonte’s has been extraordinary — they’ve been the biggest reason for the undefeated start of the Red Raiders. They’ve only allowed 21 points in three games, and it’ll be tough for Central Mountain to counter around them.

But despite the numbers, this is still a rivalry game — that’s what makes this week so much fun. No matter how the other team is, they’re both completely balanced when the ball kicks off. Anything can happen.

Rivalry football, baby. You got to love it.

With the game being in Mill Hall, the craziness could get completely out of hand in this game — especially after that triple-overtime performance these two programs gave us last year.

And get your body armor ready, because there’s a strong possibility of a shootout occurring in this game with the ammo that both teams have.

Oh man, this is going to be so much fun.

Can we just play football already?