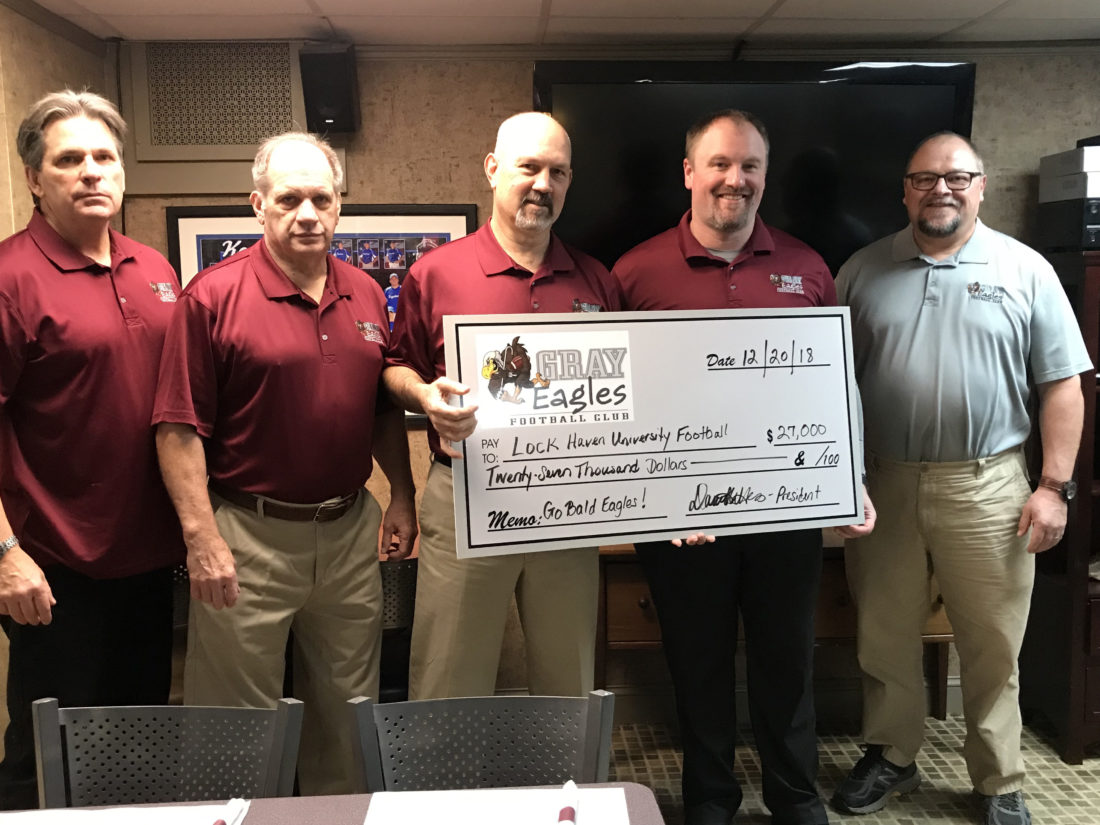 SAM KUPERMAN/FOR THE EXPRESS The Gray Eagles Football Club hands LHU Head Coach Dave Taynor a check for $27,000 Thursday at Haywood's on the Green in Mill Hall. Pictured from left to right; Brian McBryan (Board of Trustees) Bob Myers (Board of trustees), Bill Sementelli (Treasurer), Taynor and Dave Hess (President).

As Lock Haven University football heads into the heart of recruiting season, the program will do so with a gift from its alumni booster organization. The Gray Eagles Football Club presented LHU head football coach Dave Taynor with a $27,000 check last Thursday, accounting for money raised over the past year from fundraisers and annual membership fees.

The program had significant use of this donation from the 5013c non-profit last year, and will look to take the money even further this time around.

The organization, which closes in on its second football year of existence, has worked feverishly to help level the playing field between Lock Haven and the rest of the Pennsylvania State Athletic Conference (PSAC) in terms of available scholarships.

One of these scholarships, called the Fly High 6 Scholarship, is especially meaningful to so many around LHU Football. It is a new one, named in honor of former Bald Eagles all-conference defensive back and Lock Haven graduate Daniel Strawbridge, who died by suicide in March.

“Their influence is very important to our program,” Taynor said. “It’s also something that was one of the goals when I came here, was to get an organization that would go together to hopefully make it sustainable where that organization has accountability to itself, not just the current coach in place.

Dave Hess, who serves as president of the Gray Eagles, was on hand Thursday to hand the check over to Taynor at Haywood’s on the Green in Mill Hall. Hess was a part of the 1979 Bald Eagles team, the last football team to win a PSAC title at The Haven.

Hess, along with the rest of the members of this growing group, seek to help Lock Haven get back on top of the conference, no matter how high the climb.

“Our goal overall is to get Lock Haven to a point where we are competitive in terms of the money we give out for scholarships,” Hess said.

The Gray Eagles organize events throughout the year, including golf outings, a cash raffle and silent auction, and the annual Grid Iron Greats Banquet. They do so with their growing social media base, as they strive to get Lock Haven Football Alumni of all generations on board in the rebuild of the program.

While this check from the Gray Eagles (which doesn’t account for other individual donations from members, adding on a little bit more to the grand total the team’s received over the year) is extremely beneficial to Lock Haven football, it’s just scratching the surface of where both Hess and Taynor would like to be.

“We’ve made some steps, but as far as I’m concerned the sky’s the limit,” Hess said. “My goal personally is to be on top and that’s got to be where we’ve got to get to.”

“This year we’re gonna celebrate the 40th anniversary of the last conference championship team here,” Taynor said. “We want to give ourselves an opportunity to win a PSAC Championship at the Division II level, which has not happened in the history of the program.”

While outsiders could look at the records of recent Lock Haven football teams and see a sizable disparity between wins and losses (the team went 2-9 in 2018), there is plenty of positive momentum brewing.

The team returns a young core on both sides of the ball, including the entirety of its 2018 defensive unit.

There are a laundry list of returning impact players. That group will be bolstered by the recruits Taynor and his staff can get to sign on the dotted line come February 6. While National Signing Day offers no sure things, the Gray Eagles are confident they have one in Taynor.

“We have a heck of a football coach here in Coach Taynor,” Hess said. “We’ve got to make a difference right now because the iron is hot at Lock Haven University.”