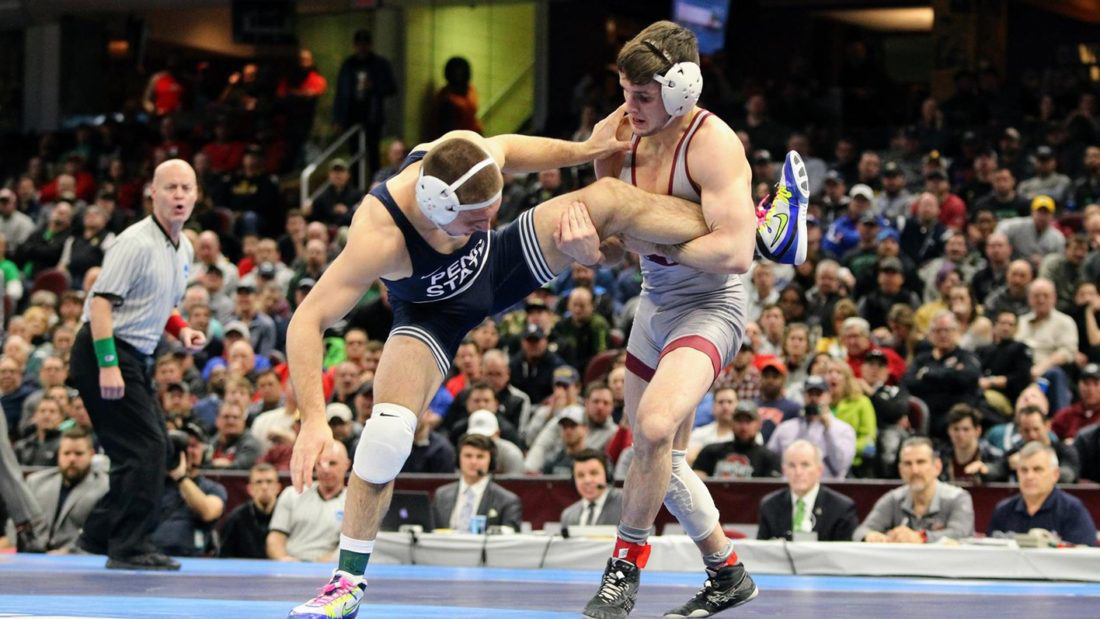 Lock Haven University’s Ronnie Perry wrestles in an NCAA wrestling match during the 2017-2018 NCAA season. Perry is now a member of the LHU wrestling coaching staff.

Ronnie Perry is a name that became a household one in Lock Haven after last year’s run to the NCAA Division I finals at 149 pounds. While he’s no longer wrestling for LHU, he’s still contributing greatly in Mat-Town USA, serving as a volunteer assistant on coach Scott Moore’s staff.

“It’s definitely different being on the other side of things,” Perry said on Tuesday’s LHU Coaches Show. “You go from everything’s about you, all your training, everything’s about how your feeling to the complete opposite honestly. Making sure all of the guys are doing the right things training, doing the right things off the mat. You’re kind of catering to what each guy on the team needs individually.”

Perry has made this transition from athlete to coach on a team that he played a major role in taking to new heights.

Lock Haven has made the jump from a program with a rich wrestling history to a team that is adding to said history. LHU first crept into the national rankings last year after an upset dual win over No. 11 Rutgers. The success has continued since, with last year’s plethora of significant results spilling over to this year.

“I kind of got here at the start of it,” Perry said. “Coach Moore had just gotten the job my first year at Lock Haven. So it’s been really cool to see it come through. It’s funny to think back and see how different the program is now compared to what it was when I first got here.”

After Friday’s 28-10 home-opening dual win over George Mason, the nationally-ranked Bald Eagles continue along through a season with significant expectations. Their deep roster, led by returning All-American Chance Marsteller, is full of talented wrestlers that Perry was teammates with for portions of the previous half-decade.

This gives Perry a different angle and perspective when it comes to coaching these athletes.

“They kind of saw the things that I did as an athlete and it’s easy to coach them because they know the things I’m telling them are the things I actually did and they saw it firsthand,” Perry said. “It’s not like you’re telling a kid to do this and he’s never seen you do it before.”

In Quarryville is where Perry says his interest in the coaching field first became apparent, and it only grew from there.

“I don’t think it just started at Lock Haven,” Perry said. “I think it started a long time ago. I’ve been pretty blessed to have a lot of great mentors and coaches throughout my life. Definitely I have some really awesome high school coaches. Then I got here and was fortunate enough to have coach Moore, coach [Rob] Weikel, coach [Nate] Carr, even [former LHU assistant] coach [Steve] Fittery who was here a couple of years ago.”

As the season rolls along Perry and the coaching staff will continue to get their guys ready to go week in and week out. Perry is excited to take all of this in, but is especially eager to be coaching in crunch time.

“I’m excited to be a coach during the postseason,” Perry said. “You know, conferences, into nationals and stuff like that. It’s going to be fun to be on the other side of it now.

“I think having that different dynamic, being on the other side, it’ll be cool because I was there last year so it’s all fresh. It’s all right there, so I feel like I can help the guys out both mentally and physically to get ready for that.”

Perry will continue to work with a group he cares very deeply about, and is putting the effort in to show for it.

“I want to see my friends and my teammates succeed so much,” Perry said. “That’s why it’s easy for me to go out and help them and coach.”