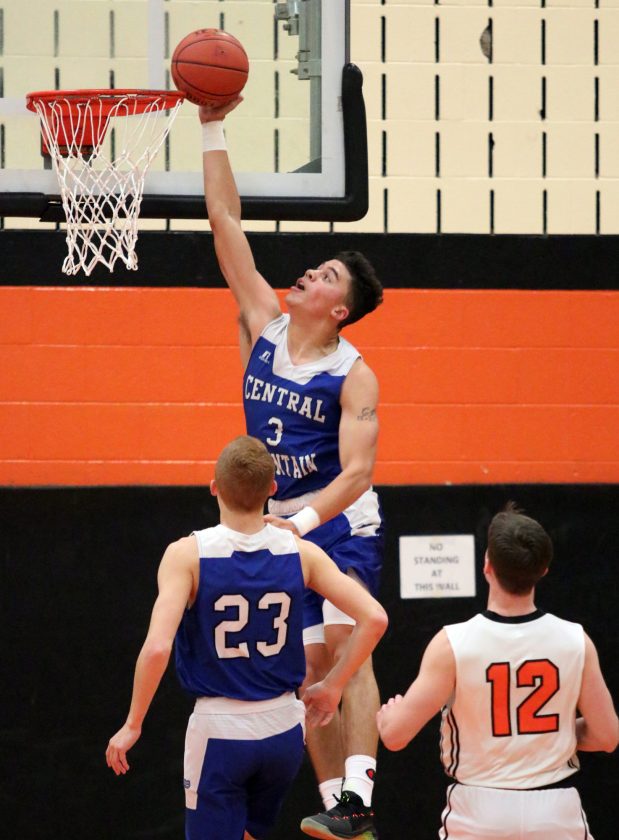 JERSEY SHORE- When Jersey Shore opened an eight-point lead in front of a large and boisterous crowd Friday, Central Mountain could have panicked. But the Wildcats never flinched.

They had Jersey Shore right where they wanted them.

Yes, Central Mountain would like to start games stronger, but after erasing a nine-point road deficit at Selinsgrove two nights earlier, Central Mountain hardly was rattled. The Wildcats remained confident, cut the deficit to one by halftime and then dominated the second half while continuing their resurgence. Collin Jones scored a career-high 30 points, Connor Soo erupted for a career-high 20 and JT Pentz grabbed 11 rebounds as Central Mountain came roaring back for its second straight road win, defeating Jersey Shore, 74-61.

Following a rough start, the defending HAC-I champions are attempting to make this season one impressive comeback story.

“It was a slow start, but me and coach and everyone kept saying that if we play 100 percent 100 percent of the time we will come together as a team,” Jones said after also pulling down 15 rebounds and adding four assists. “It all is panning out in the end.”

“The biggest thing with us is earlier in the year we really had some mental lapses. It even happened early in the game which contributed to the deficit but they’re finding ways to get it back quickly and get themselves right again,” Central Mountain coach Tyler Bardo said. “Part of that is trying to help them through that, but he biggest thing is they are communicating really well out there.”

Central Mountain (3-5, 3-3 HAC-I) quickly seized control in the third-quarter’s opening minute, scoring on three quick layups. The run reached 10 and the Wildcats built a nine-point lead. Jersey Shore kept trying to battle back but never pulled closer than six again. Jones opened the half with two quick assists, then converted a 3-point play. Five players scored during the 19-point quarter and for a second straight game, everything came together over the final two quarters.

Jersey Shore cut the deficit to seven three times in the fourth quarter, but Central Mountain answered each time. Jones is one of the area’s best players and is averaging more than 20 points per game. He finished inside with strong post moves, hit two long 3-pointers and was 10 of 13 from the foul line while doing a good job involving his teammates. That he shined again was not surprising, but what has things really looking up for Central Mountain is the way its new starters are progressing.

Soo played his best game, consistently attacking the basket and also drilling two 3-pointers. Pentz was tremendous on the boards, especially offensively, and Jake Skritch and Aidan Major hit key 3-pointers as Central Mountain went 13 for 24 from the field in the second half and made 18 of 23 foul shots.

“The last game at Selinsgrove we were down and we battled back. We were doing what we do well, getting up and down the court and pushing the ball,” Jones said. “That really showed us if we stick to our game we can make things interesting.”

“Three of the last four games we’re starting to do some things pretty well,” Bardo said. “We talked all year about we’re not a program of one. We’ll take contributions everywhere and we need them from everywhere. Connor has being in attack mode the last few games and that’s great for the team.”

Jersey Shore (5-5, 3-3) started the season strong, but lost its fourth straight. Nate Ewing, Tanner Lorson (14 points, 9 rebounds) and Trevor Gee all scored in double figures, but the rest of the team combined for just seven points. Combine that with defensive lapses and getting pounded on the boards over the last two quarters and Jersey Shore faced a mountain it could not climb.

The Bulldogs did cut an 11-point third-quarter deficit to 49-43, but Central Mountain scored the quarter’s last four points. Jones picked up his fourth foul with Central Mountain leading by 11 early in the fourth quarter, but it managed the game well in his absence and it was a seven-point game when he returned. Jones promptly converted a 3-point play, pushing the lead to 67-57 upon his return.

“We were just losing our focus defensively during that stretch and offensively we’re not nearly playing as good a team basketball as we were earlier in the year,” Jersey Shore coach Scott Munro said. “We get a little stale, a little stagnant where we have too many guys standing around and we didn’t have that at the beginning of the year. We really moved the ball well and moved ourselves away from the basketball and right now and that’s what we’ve been focusing on in practice. We’ve done it really well at practice, it just hasn’t translated to the game.”

Ewing continued his big junior season and played a tremendous game. A year ago, Ewing enjoyed a breakthrough season and developed into one of the district’s premier shooters. Now, though, he is so much more. Ewing has become terrific off the dribble and relentlessly attacked the basket, scoring eight more points in three of the four quarters.

“Nate has done a really good job of expanding his game and adding that dimension to it which makes him really hard to guard,” Munro said. “He does really well finishing in there against big guys. It doesn’t matter who’s in there, he gets to the rim and finishes really well. I’d just like to see somebody else step up to the plate and be able to contribute a little bit more.”