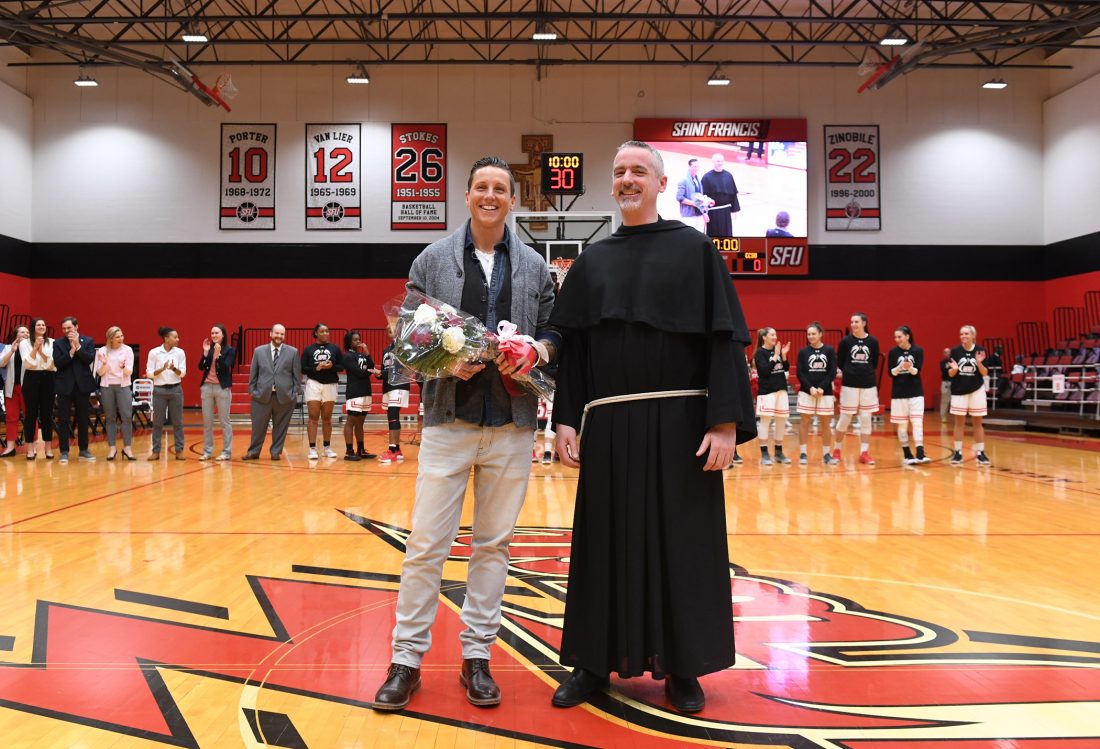 LORETTO – Just as humble now as when she played 20 years ago, Jess Zinobile has difficulty talking about herself when it’s mentioned that she’s the greatest women’s basketball player in Saint Francis and Northeast Conference history.

The Lock Haven High School grad’s first instinct is to deflect the individual praise and focus instead on her team.

As great as she was as a player – with jaw-dropping statistics, court dominance and versatility – a big reason why Zinobile is such a legend at Saint Francis and in the NEC is because of the incredible success she helped her teams enjoy.

It was easy to predict, then, what Zinobile’s answer would be when asked what means more to her – the tremendous individual honors or leading Saint Francis to the NCAA Tournament in each of her four seasons.

“Getting to four NCAA Tournaments,” she said. “I’ve always been about the team.

“Coaches, even back in the day, would just yell at me for passing all the time. I was just always about getting my teammates into it and the team aspect of all of it. I know that nothing could have happened without everybody that I played with.”

Saint Francis bestowed its highest honor upon Zinobile on Saturday, hanging her No. 22 jersey on the wall at DeGol Arena. It’s not exactly a number retirement, since future players can still wear 22, but Zinobile became the first female athlete in school history to have her number honored in such a way.

She is now in incredible company at Saint Francis. The only other three numbers hanging on the wall at DeGol Arena belonged to Basketball Hall of Famer Maurice Stokes (26) and NBA stars Norm Van Lier (12) and Kevin Porter (10).

“She’s the first woman to go up there,” Saint Francis athletic director and interim women’s basketball coach Susan Robinson Fruchtl said. “I think we’ll have a few more females go up there, as well, and there’s a couple other guys that need to go up there.

“We’re really proud of her. We taught the current players who she is, what she did.”

What Zinobile did was remarkable during her SFU career, which spanned from 1996-2000.

She held the record for most points scored in NEC history (2,338) by a man or woman until it was surpassed this year by current Red Flash superstar Jess Kovatch.

Zinobile wasn’t just an offensive force, either. She ranks second in league history in career rebounds (1,295), despite being just 6-feet tall and often playing on the wing.

She could dominate a game in just about any way, said Saint Francis men’s basketball coach Rob Krimmel, a friend and playing contemporary of Zinobile’s at Saint Francis in the late 1990s.

“Her competitiveness, her drive and her consistency, to be able to do it over four years was impressive,” Krimmel said.

Zinobile could always score, obviously, highlighted by a then-NEC Tournament record 46 points against Long Island in the 2000 semifinals. But it was her all-around game that sets her apart in NEC history.

“That was always most important to me,” Zinobile said of her versatility. “I know my freshman year, Coach (Jenny) Przekwas, that was her biggest thing was defense and start your game on defense. I always knew if I was working hard on defense, my offense would come around.

“In rebounding, hitting the boards, I wasn’t a big 3-point shooter, so I always had to work hard for my points.”

All of that hard work helped take Saint Francis from an up-and-coming program to NEC dominance. The Red Flash made the NCAA Tournament for the first time in 1996, before Zinobile arrived, then over her four years she led the way to four more NCAA berths as part of what was called the “drive for five.”

“Four championships speaks for itself,” Robinson Fruchtl said of Zinobile’s legendary career. “You are the leader of a team that wins four championships, first off it’s a heck of a team, and she was so tough – tough-minded, tough rebounding, tough driving, great footwork.”

And great competitor, one who could will her team to win.

“She is the true definition of a competitor,” said Deanna Jubeck, a teammate of Zinobile’s at SFU and now head coach of the Hollidaysburg Area High School girls team. “Not only did she do everything she could in her power to make herself the best basketball player in the NEC, she also wanted our team to go as far as we could, and that speaks volumes.”

Following her brilliant college career, Zinobile was selected in the fourth round of the WNBA draft in 2000. She remains the only NEC player ever drafted by the WNBA.

She’s been a police officer in North Carolina since 2004, investigating violent felony offenses. Three years ago, she and her unit were trying to arrest a suspect wanted for homicide, and the man opened fire on the officers.

Zinobile was shot in the ankle, but she remained engaged in the gunfight along with other officers and shot the suspect. The man continued to shoot at officers, drawing more fire upon himself until he was killed.

For her bravery and dedication, Zinobile later was named Officer of the Year by the North Carolina Fraternal Order of Police, which wrote of her:

“Sister Zinobile gives it her all to make a difference in the community; she puts her life on the line each day to bring the most violent criminals who commit the most violent acts to justice. She does this to bring closure and justice to the victim’s families.”

Zinobile has been honored many times in many ways over the years for her storied basketball career. She’s already been inducted into the NEC Hall of Fame and Saint Francis Hall of Fame, and she was MVP of the league’s 20th anniversary team.

Zinobile accomplished all of that greatness despite being a lightly recruited player out of Lock Haven High School. She said then-Penn State coach Rene Portland did not recruit her, which led to one interesting note about Zinobile’s storied career.

“It was kind of bittersweet whenever I broke the scoring record playing against Penn State,” she said.

“I guess the small school, small town, I didn’t get recruited a lot,” Zinobile added. “And then Saint Francis was close to home, a great women’s program, they had won a championship the year before I got here. So I was very lucky, and Coach Przekwas pushed me really hard my freshman year, and I was really lucky to play with great players.”

Saint Francis has spent this school year honoring 50 years in women’s athletics at the school, and this weekend featured a celebration of women’s basketball, along with honoring Zinobile.

In that light, it’s amazing to see one glaring similarity between Zinobile and the player who not only has broken her scoring record, but who someday very well could have her No. 23 jersey hanging next to Zinobile’s No. 22 at DeGol Arena.

Kovatch was a lightly recruited player out of Philipsburg, N.J., who received exactly one Division I scholarship offer – from Saint Francis. She has turned the opportunity into a brilliant career, as she’s second all-time in NCAA career 3-pointers made (436) while piling up 2,651 points.

Kovatch found herself in the absolute perfect situation, coming into an uptempo system, run by former SFU coach Joe Haigh, that relied heavily on the 3-point shot.

It was remarkable hearing Kovatch talk about what her goals were when she came to Saint Francis, compared to how things turned out.

“When I was offered a scholarship here, I said to myself, at least it’s D-I, even if I don’t get playing time until my junior or senior year, at least I could work at the highest level of basketball,” she said.

“But Coach (Haigh) realized my freshman year that I had scoring talent. … His system fit perfectly with (my) style of play. What I was good at was 3-point shooting, and I worked on that a lot. Coach Joe put a lot of emphasis on my strengths and kind of ran the offense through me, and my teammates got me the ball when I was hot.”

Kovatch was first asked about Zinobile midway through her freshman season, when she was leading the nation in scoring among freshmen. At that point, it already was very much a possibility that Kovatch could catch Zinobile’s scoring record, and sure enough, it happened earlier this season.

“I went through my career and reaching 1,000 and 2,000 points, Jess Zinobile’s name was always brought up – four-time champion and the kind of impact she made here for women’s basketball,” Kovatch said. “This is my first time meeting her (on Friday), and it’s an honor to be talking to one of the top players at Saint Francis and the legend that she is.”

Zinobile is indeed a legend, and the school honored her incredible achievements Saturday.

And make no mistake, Kovatch is very much a legend in her own right at Saint Francis and in the NEC, and she will reap the rewards of it for the rest of her life. She’s thought about what it would be like if the school someday honors her with a jersey number dedication.

“It came up a little bit,” Kovatch said. “I’m just trying to live in the moment right now and be focused on the team and getting my team to a championship. Obviously it crossed my mind, and obviously Jess Zinobile set the bar high.

“It’d be an honor to eventually down the road be honored the same way Jess Zinobile is and have my name in the gym next to Maurice Stokes and Jess Zinobile.”