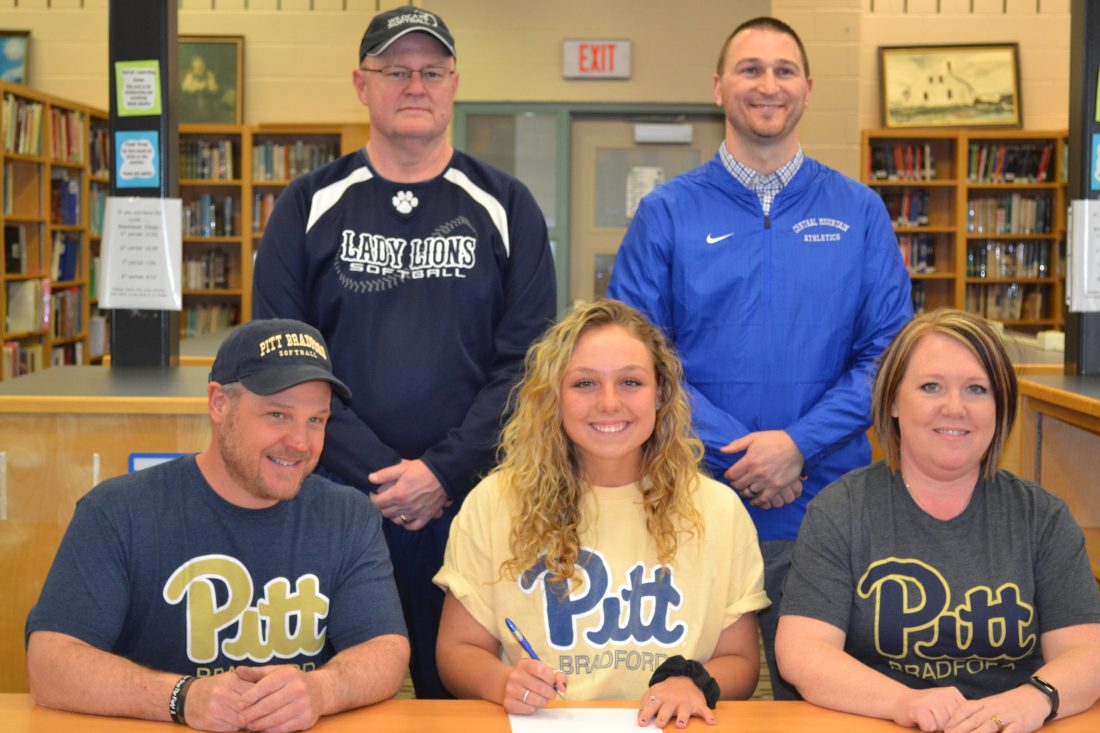 At her brother’s games she soaked in the culture and decided to pursuit a softball career of her own. Now–after dedicating nearly 10 years into the sport– her hard work paid of as the senior’s softball career will continue past her June graduation.

On Tuesday, Knepp signed her letter-of-intent to continue her softball career at the University of Pittsburgh-Bradford.

“I am really excited to be able to continue my career in softball,” said Knepp, who’s majoring in Nursing. “Just being able to play after high school is going to be a really good experience.”

Knepp’s commitment to Pitt-Bradford falls on the heels of an impressive junior campaign. Knepp hit .426 last season with four home runs, 20 RBIs and six doubles. On the mound she recorded a 2.4 ERA over 41 innings of work.

Knepp’s impressive stat line earned her a 2018 second team All State selection. Her versatility allows her to play mulitple positions (pitcher, first base and third base,) as she’s unsure of her primary role as a Panther in 2020.

“My favorite position would probably be pitcher, but I might be playing third base in college,” Knepp explained. “I might get to pitch a little bit, too. But with third base I’ve been playing that position since I started playing softball. It’s like my home.”

Knepp’s decision to attend Pitt-Bradford was a simple one. The combination of their quality softball team– and their rich nursing program, was too good to pass up.

“I only chose Pitt-Bradford because they had the best nursing program, but they do have a good softball program,” Knepp said. “I’m looking forward to being able to see what college softball is like. I’m ready for the better competition.”

Knepp acknowledged the intensity of the Central Mountain coaching staff helped build her bridge to the collegiate level.

“The coaching staff are very hardworking and they want you to push yourself to be the best that you can be,” Knepp said. “They don’t let you slack off. And I have to thank [previous coach) Benjamin Trew for being a major contributor of my success in high school softball”.

When reflecting on her softball career, Knepp said she cherishes the moments spent with her team. She holds dearly the long bus rides home from away games with the group of girls she’s either played softball with or against since little league.

“I’m probably going to be one of the main pitchers since we don’t have a lot of pitchers,” she said. “So I want to help the team out with pitching. And if I’m not pitching I want to help out however else I can.”

Knepp’s final season intersects with the new Fred Caldwell coaching era. Caldwell– Bellefonte’s former coach, replaced Benjamin Trew over the offseason. But for the past two seasons he actually served as Knepp’s hitting and pitching coach.