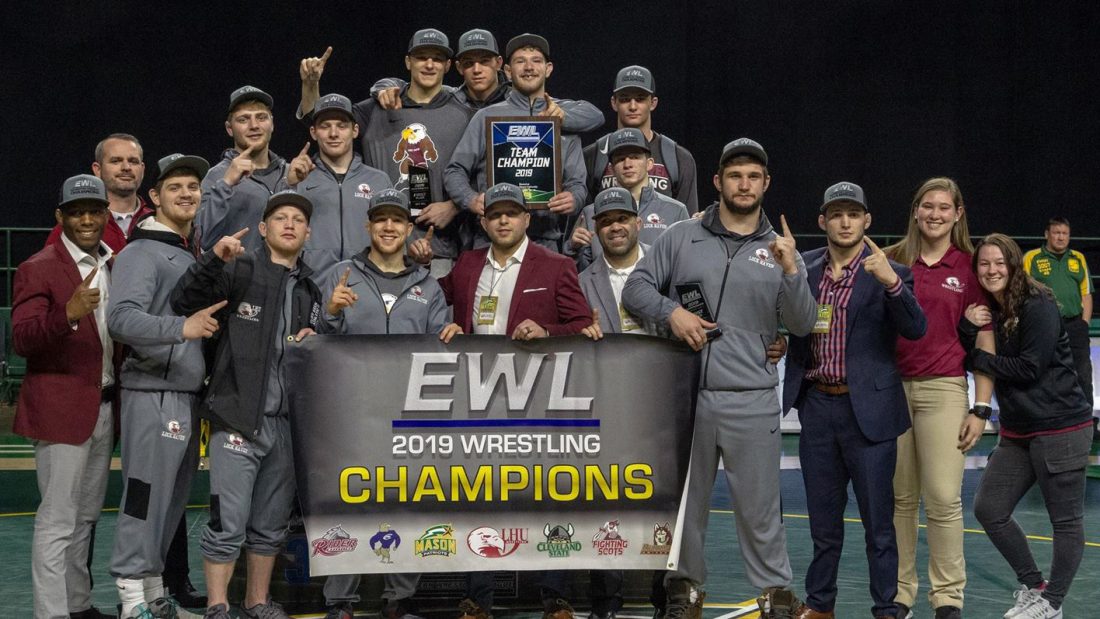 (TIM BARNHART/LHU SPORTS) Members of the Lock Haven University wrestling team pose with their banner after winning the 2019 EWL Wrestling Championship for the second consecutive year.

“The goals that we set for the tournament were pretty lofty,” LHU head coach Scott Moore said. “We had high expectations going in, and we wanted to match the same results and same intensity that allowed us to win the EWL title last year. We were about 99 percent successful in getting that done and getting six champions.”

All but one LHU wrestler placed in the top three Saturday. Sophomore Luke Werner took second place at 125, while redshirt-freshman Brock Port and junior Jared Siegrist took third at 149 and 174 respectively.

“It was hard to beat what we did last year, but going in knowing that if we wrestled well and won the matches that we knew we could it would be a banner year for us,” Moore said.

During the morning session of the tournament Lock Haven feasted with bonus points. The first round and semifinals featured two major decisions, two tech falls, and four pins by Lock Haven wrestlers. Two of those pins came from reigning All-American Chance Marsteller. He earned EWL Tournament Most Outstanding Wrestler award.

Given that LHU had eight wrestlers seeded in the top two in their weight class, the Bald Eagles were heavy favorites coming in. Lock Haven has had these lofty expectations all season long, and the Bald Eagles certainly met them Saturday.

The finals started at 285, where Thomas Haines defeated George Mason’s nationally ranked Matt Voss 7-4 to earn the EWL title. There were two allocated spots at the heavyweight position, but Haines’ victory could significantly help him with NCAA Tournament seeding. It was also a nice revenge match, as Voss defeated Haines in November in the George Mason dual at Lock Haven. The Quarryville native heads to nationals for the third consecutive year, and enters as the winner of 11 consecutive matches.

“I just saw the momentum building,” Moore said. “His (Haines’) confidence and his ability to score in that match is something I think he’ll be able to take with him to nationals.”

After Haines, Werner took second place at the 125 slot. He lost 9-8 (TB2) to Willy Girard of Bloomsburg. Werner won the first two rounds of the tournament by pin and tech fall, but fell just shy of the title. Girard has wrestled well against Werner all year, defeating him by decision for the third time. Werner came into the tournament in the national rankings, and has a good chance of joining his teammates in Pittsburgh despite not receiving an automatic qualifying bid.

“DJ’s an ideal student-athlete,” Moore said. “He’s just one of those kids that does everything right and always deserves the highest regard from coaches and teammates. Just to see how he’s battled, from starting at 141, to placing at the Southern Scuffle, and to be disciplined enough to drop to 133. His full body of work for the year is just amazing.”

The 141 matchup predictably went Shoop’s way with very little resistance. A tech fall and two majors propelled him to the title, as he topped Carmine Ciotti of Edinboro 13-0 in the finals. Shoop heads to his third straight NCAA Championships.

At 149, redshirt-freshman Brock Port fought his way to third place. The Bellefonte native came in as the fifth seed, but battled for wins in the first round and consolation semifinals to earn a spot in the third-place match. Port then edged out Edinboro’s Tyler Vath 6-5, finishing his freshman year with a victory.

The 157 bracket saw LHU’s Klucker run the table to make it back to nationals for the second consecutive year. With only one automatic qualifying spot available at 157, the second seeded Klucker would need to win the EWL title to advance to nationals.

Despite coming into the year in the national rankings, Klucker has had his ups and downs. This was highlighted Nov. 30, when he lost 11-3 to George Mason’s Kolby Ho by major decision. With a tournament win as his only realistic chance of heading to nationals, Klucker got sweet revenge Saturday. He pinned the top-seeded Ho in 1:49, winning his second straight EWL title.

“Going into the tournament we knew that (157) was probably the deepest weight class, even though they only had one qualifier,” Moore said. “He had to be on point all day from the start.”

After the clicker victory, the team title seemed very likely. Marsteller just about cemented that with his 12-3 major decision over Rider’s nationally-ranked Jesse Dellavecchia in the finals. He now moves to 22-2 on the year, heading into nationals with some real momentum on his side.

Sigrist lost his semifinal matchup at 174 after drawing a first round bye. The Manheim native lost a tight one 4-3 to Edinboro’s Jacob Oliver. He pulled through in the consolation semifinals and third place match in order to claim third place in his bracket.

At 184, Hazel won the title for the second straight year. He went 3-0 Saturday, capping off LHU’s championship night with a 5-1 decision over former NCAA Qualifier Michale Fagg-Daves of Rider.

“Winning eight of the nine matches in the night session capped off the day and I think really made a statement as far as our performance for the weekend,” Moore said. “Just the way we finished, which ultimately allowed us to win the team title.”

On Tuesday the 44 at-large bids will be awarded. Lock Haven will hold out hope that Werner will be among those to make the cut. While there is always uncertainty when things are out of your control, Moore believes that Werner’s resume should check out on decision day.

As Lock Haven continues its rebirth and rise as a program, this impressive showing was a fitting next step. It is one thing to win a conference title and go on a memorable run like the team did last year in Cleveland. However, to sustain and repeat at the conference level symbolizes a level of stability that could be highly beneficial to the program as it voyages into the Mid-American Conference (MAC) next season.

For now, the focus is all on Pittsburgh. Werner will have to wait and see if he’ll be joining, but six LHU wrestlers will make their return to nationals next Thursday, with All-American status on their minds.