LHU heads to EWL Tournament with Pittsburgh on its mind 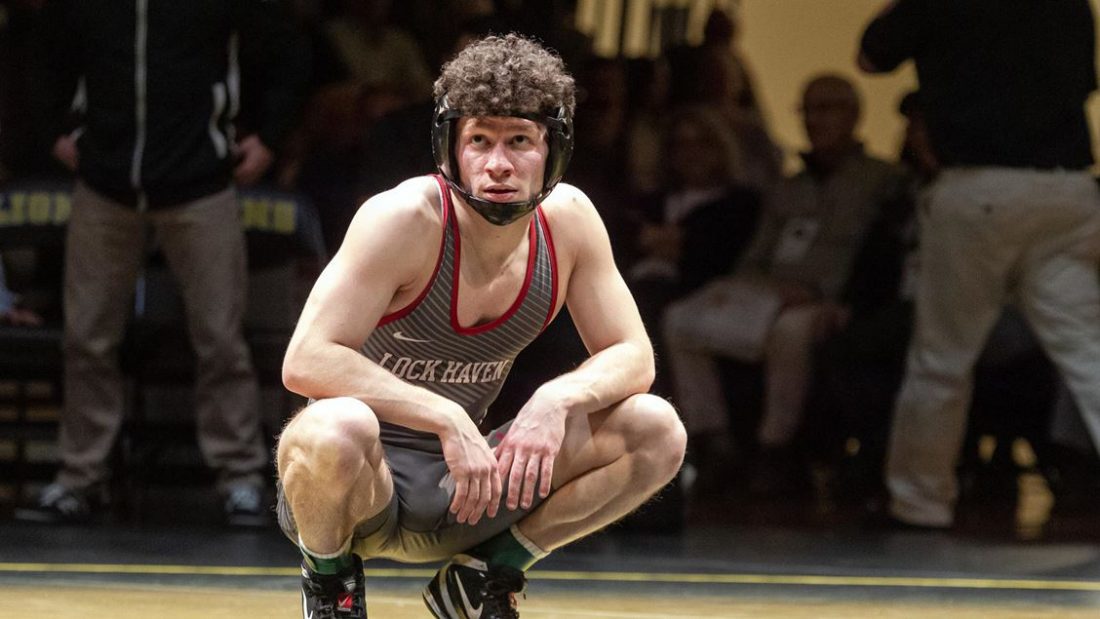 The Lock Haven University wrestling team is on a mission to capture its second consecutive Eastern Wrestling League (EWL) Tournament Championship. That goal, which could be accomplished Saturday in Fairfax, Virginia, is far from the final milestone the team hopes to hit in the 2018-19 campaign.

With the tournament seeding and NCAA qualifier allocations all out now, the 10 LHU wrestlers in the championship lineup know exactly what their path looks like toward earning a spot in the 2019 NCAA Championships.

The EWL has 14 qualifiers. The 125, 141, 149, 157, 174, 184, and 197 pound weight-classes all only have room for the champion to make nationals. Anyone in those spots that falls short of a title Saturday will need to rely upon the selection committee to sneak into the field in Pittsburgh with an at-large bid. 133 and 285 have room for two EWL wrestlers, while a deep 165 slot gives the EWL’s top three an automatic national tournament berth.

Lock Haven ran the table in the EWL dual slate, unsurprisingly leading to half of the Bald Eagles’ lineup earning top seeds in the EWL field. Sophomore Luke Werner (125), redshirt-junior DJ Fehlman (133), redshirt-junior Kyle Shoop (141), redshirt-senior Chance Marsteller (165), and redshirt-junior Corey Hazel (184) are all number one in their respective weights. Redshirt-senior Thomas Haines at 285 is the No. 2 seed, which puts him in position to also earn another trip to nationals should the EWL tournament results synch up with the seeding.

Marsteller, who is the heaviest of favorites as the No. 5 ranked wrestler nationally in his class, is a reigning All-American. He finished second in last year’s tournament, before placing fourth in Cleveland at last year’s nationals. Even with Rider’s Jesse Dellavecchia also remaining as a steady presence in the national rankings, Marsteller is expected to finish on top.

Despite an early-season loss to top-seeded Matt Voss of George Mason, Haines is riding an eight-match winning streak. Both Haines and Voss are ranked in the top 20 nationally, which should make for an exciting championship bout if things shape up the way they’re expected to. Haines is No. 18 in the latest NCAA Coaches’ Panel Rankings.

Hazel, along with redshirt-junior Alex Klucker at 157, are returning EWL champs.

Hazel’s 184 class is crowded with talent, as Bloomsburg’s Trevor Allard and Rider’s Michale Fagg-Daves all could pose a threat in this class. Even so, Hazel has been a fixture in the national rankings for a reason, and is in prime position to return to nationals for a second consecutive season. Hazel is No. 15 in the latest NCAA Coaches’ Panel Rankings.

Klucker is seeded second at 157, behind George Mason’s Kolby Ho. Klucker lost to Ho by major decision in November. Klucker came into the season in the national rankings, but has been up and down throughout the campaign. He has no room for error in Fairfax, as his 19-9 season won’t get him an at-large bid. Klucker’s experience could help him grind out a win Saturday, as Ho is only a true freshman and the rest of the field leaves a lot to be desired.

Shoop, the national leader in tech falls, shouldn’t have issues with the 141 group. He seeks his third appearance at nationals. He is No. 20 in the NCAA Coaches’ Panel Rankings.

Fehlman did not make the NCAA’s last season, but did find his way there in 2016-17. He began the season at 141, but since coming down to 133 he is 7-1. His only loss at this weight came in a tiebreaker at Cornell’s nationally-ranked Chaz Tucker on February 2. He sits at No. 25 in the NCAA Coaches’ Panel Rankings.

Werner strives for his first trip to nationals. He’s currently No. 32 in the NCAA Coaches’ Panel Rankings. The third seed, Willy Girard of Bloomsburg, defeated Werner twice by decision during the season. Both of those results came before 2019, in which the Bethlehem native has really turned a corner. Werner knocked off second-seeded Jonathan Tropea of Rider last month. Even if he doesn’t win the tournament he brings a compelling case for an at-large bid, but the hope is surely not to leave this to chance.

Both Siegrist and McGonigal are in the top 33 in NCAA RPI, which accounts for strength of schedule when factoring in individual records. They’d still need to win their class in order to qualify.

Siegrist is experienced, and has wrestled some of the top seeded wrestlers in his class close all year. McGonigal has been sidelined for the past two months, which brings into question what he’ll look like on the mat Saturday. If he wrestles like he did early in the season, maybe he could give Clarion’s nationally-ranked Greg Bulsak a run for his money in the 197 bracket.

The biggest longshot based on seed is Port at 149, but that’s mostly a result of him first working his way into the dual lineup last month. He is 1-2 in EWL duals, with his win coming in a 12-0 major decision at fourth-seeded Brady Barnett of Cleveland State. He lost 6-4 to third-seeded Evans Fidelibus of Rider, and 3-2 against second-seeded Avery Shay of Clarion. The Bellefonte native may be the five seed, but it’s not crazy to think that he can make a real run in this bracket Saturday.

In what will be the final EWL Tournament (major news came out this week that all seven EWL teams will join the Mid-American Conference next season), Lock Haven is expected to win another team title and send a majority of its lineup to nationals.

LHU has had a pretty smooth ride on the road to Pittsburgh this year, but the Bald Eagles have to capitalize on their pit stop in Virginia Saturday.