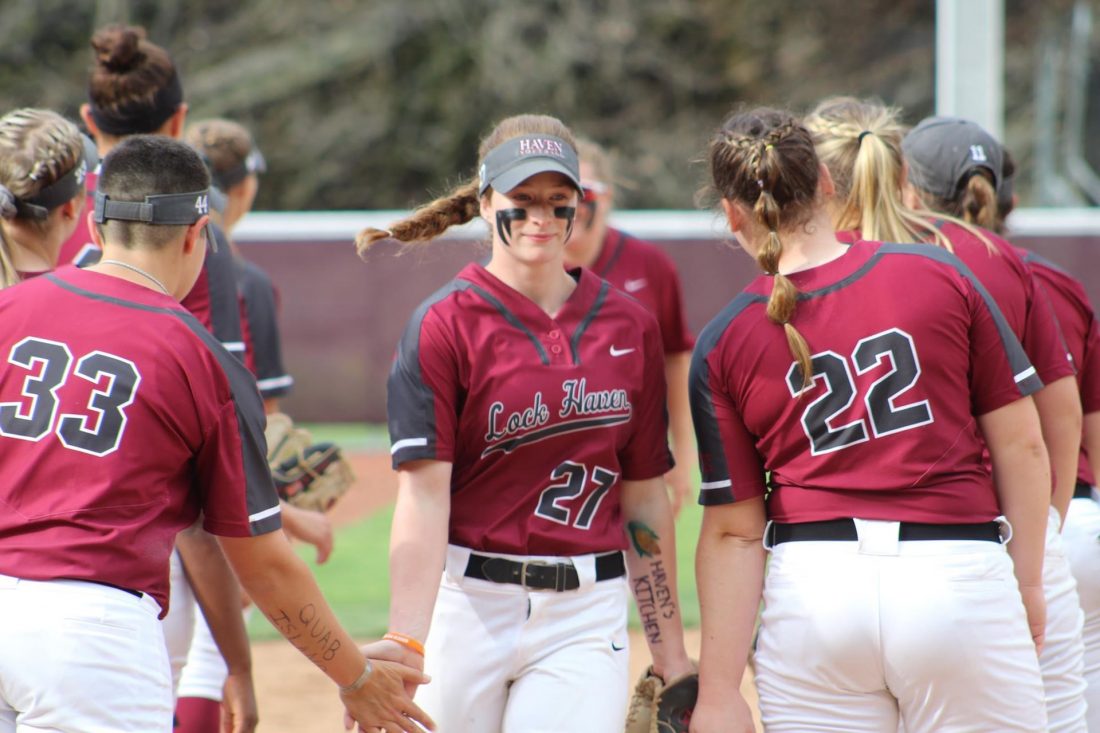 (LHU SPORTS) Jersey Shore graduate and LHU softball player Becca Caputo is greeted by her teammates prior to a NCAA softball game.

CLERMONT, Fl. – Becca Caputo (Williamsport, Pa./Jersey Shore) hit a 2-run walk-off single to left field give the Lock Haven University softball team (5-7) a 4-3 win over Hillsdale (4-11) as LHU went 1-1 on the day at day three of the PFX Tournament in Clermont Fl. Earlier in the day, The Bald Eagles fell to Fairmont State (5-6) 3-0.

The Bald Eagles fell in the first game of day three, 3-0 to Fairmont State.

Lock Haven got off to a fast start, grabbing a quick 1-0 lead when Ruppert drilled a shot to right center for a base hit that scored Ceely in the bottom of the first inning.

In the fourth inning, LHU executed a double steal to perfection as Bree Hilty (Lock Haven, Pa./Central Mountain) grabbed the attention of Hillsdale while Casey Carpenter (Moscow, Pa./North Pocono) raced home and scored as Hilty stole second base to give the Haven the 2-0 lead.

Hillsdale was able to rally and knot the game up at 2-2 in the seventh inning to send the game to extra innings. HC was then able to take a 3-2 lead in the top of the eighth.

The 3-2 deficit set up Caputo’s heroics.

With runners on second and third, Caputo drilled a fastball through the left side of the infield that scored both runners and sent LHU into a frenzy as they grabbed the 4-3 win in dramatic fashion.

Ruppert led the way offensively, going 3-4 at the plate with an RBI. Caputo finished up 2-4 with two RBI’s while Ceely ended 2-4 with two runs scored.

Bekah Slattery (Douglasville, Pa./Daniel Boone) was dominant on the mound, throwing all eight innings while allowing just four hits and striking out 12.

Lock Haven will have the team’s off day today and will return to the field Friday, March 15 when they take on Holy Family at 11:45 AM before playing Sioux Falls at 2:00 PM.