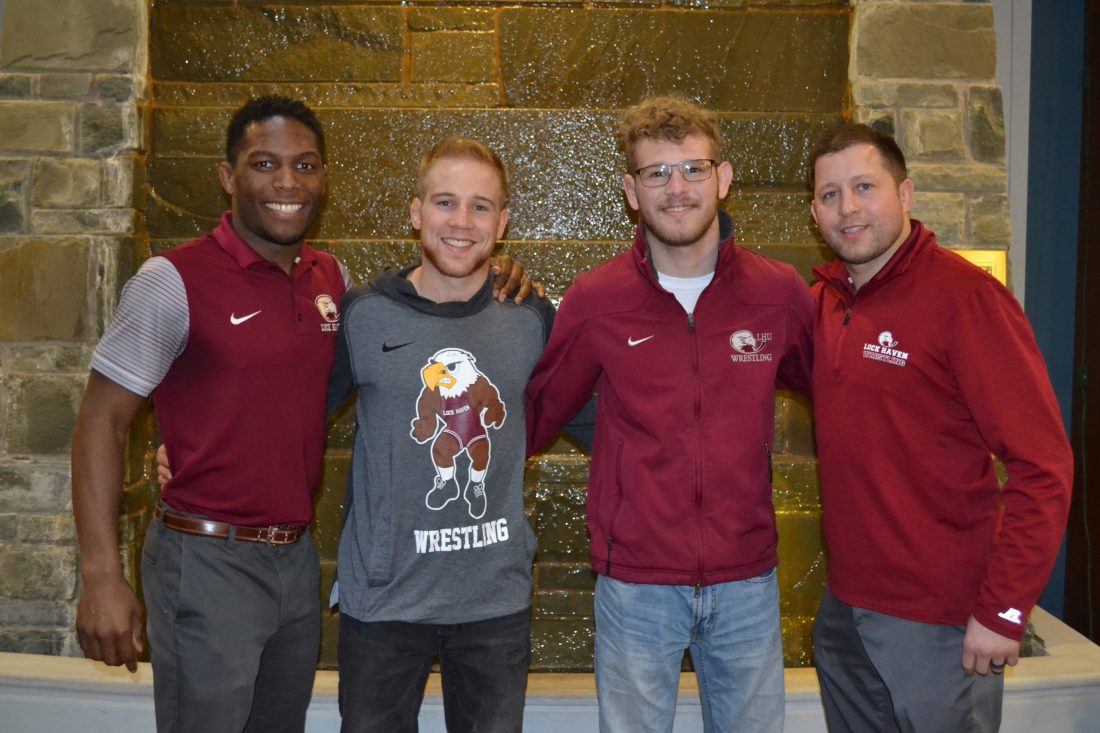 LOCK HAVEN- The Lock Haven wrestling program held a celebration of sorts inside the Durrwachter Alumni Conference Center Wednesday night. As the brackets for the NCAA Wrestling Championships were revealed, Lock Haven wrestlers, coaches and fans all looked on, excited for the tournament in Pittsburgh next weekend.

Lock Haven has six wrestlers in this year’s tournament, all of which have prior experience at nationals. Five of the six were at the NCAA Championships in Cleveland last year, where Lock Haven finished 16th in the tournament standings.

Coaches and athletes alike are aiming to improve upon last year’s success. It’s not just rhetoric though. Lock Haven fans like Dave Harger believe big things are ahead for this year’s LHU wrestlers.

“You’ve got six kids going to nationals, that’s pretty good,” Harger said. “We have the potential of three All-Americans. Maybe four or five.”

Harger’s trip to Pittsburgh will mark the first time he’s attended nationals. He wrestled growing up, but got back into it as a Lock Haven fan recently on a very organic level.

Harger ran into LHU head coach Scott Moore, and assistant coach Nate Carr Jr. at the bank one day last year. Since they were donning their Lock Haven gear, Harger figured they were wrestlers on the team. Once they explained to him who they were, the coaches built up a relationship with Harger. Now they have a fan that’s hooked on Bald Eagles wrestling.

“Everyone watches Penn State wrestling,” Harger said. “But you could come right here (to Lock Haven) and see the same quality of wrestling.”

That point is well taken, but it’s not to say that Lock Haven fans don’t also cheer on the Nittany Lions. Many Lock Haven fans making the trip to Pittsburgh also root for the national powerhouse just up the road.

Paul Ballat, the Department Chair of the Health and Physical Education program at Lock Haven University, attended his first ever tournament last year. His intent was to divide up his time during the six sessions to root for both Central PA teams. The remarkable run to the finals by then-LHU senior Ronnie Perry changed that plan up, though.

“I took my Penn State stuff and I took my Lock Haven gear,” Ballat said. “And I said ‘I will not wear anything with Penn State until every kid from Lock Haven is eliminated.”

Ballat, who checked an item off his bucket list by attending nationals last year, did not have an opportunity to change out of his crimson and white attire.

The fans that attend nationals often pay a pretty penny for tickets. A single pass for all six sessions (day and night sessions Thursday March 21-Saturday, March 23) costs well over $600 on the resale market for nosebleed seats inside Pittsburgh’s PPG Paints Arena. There’s a reason that fans from all corners of the country make the trek to nationals every year.

Fans traveling for this experience is nothing new. But this gradual rise of Lock Haven’s program under Moore has made the NCAA Championships a priority for so many fans.

Some fans, like Randy and Carol Pataky, make it a family outing.

“It’s gotten a lot bigger,” Randy Pataky said of the Lock Haven fan interest in the event. “The success of the program has generated the interest.”

The Pataky’s have gone to nationals for nearly a decade now. This began when their son, Brad, wrestled for Penn State. Now Brad and his wife will go to the tournament again as fans, as will Brad’s sister and her boyfriend.

The popularity of the Lock Haven wrestling team has increased the difficulty of getting these tickets. Moore has made it a priority to hold tickets for as many LHU fans as he can.

Fans like Tom Collins, who went to high school and college in Lock Haven, appreciates the relationship the fans have with their seventh year head coach greatly.

“There’s not many programs where the coach emails you and you can email him back,” Collins said.

Collins now lives in State College, but tries to catch most Lock Haven home duals. Given that his wife works at Penn State, he, like Ballat, also cheers for both teams. He acknowledges that it wasn’t easy to snag a ticket for this year’s event, certainly harder than it was when he attended in 2015, when the tournament was held in St. Louis and Lock Haven’s fan fare had not reached the heights it currently sits at.

“I think it’s going to bring all the fans from obviously this area, but also Ohio and other states that can get to Pittsburgh,” Collins said. “It was a tough ticket to get.”

It remains to be seen if Lock Haven can top last year’s remarkable display on the national stage. LHU has wrestlers ranked as high as five in their bracket (Chance Marsteller at 165), all the way down to No. 32 (Alex Klucker at 157). What is a guarantee, is that the tournament experience is one that fans in Mat-Town USA and beyond greatly covet.