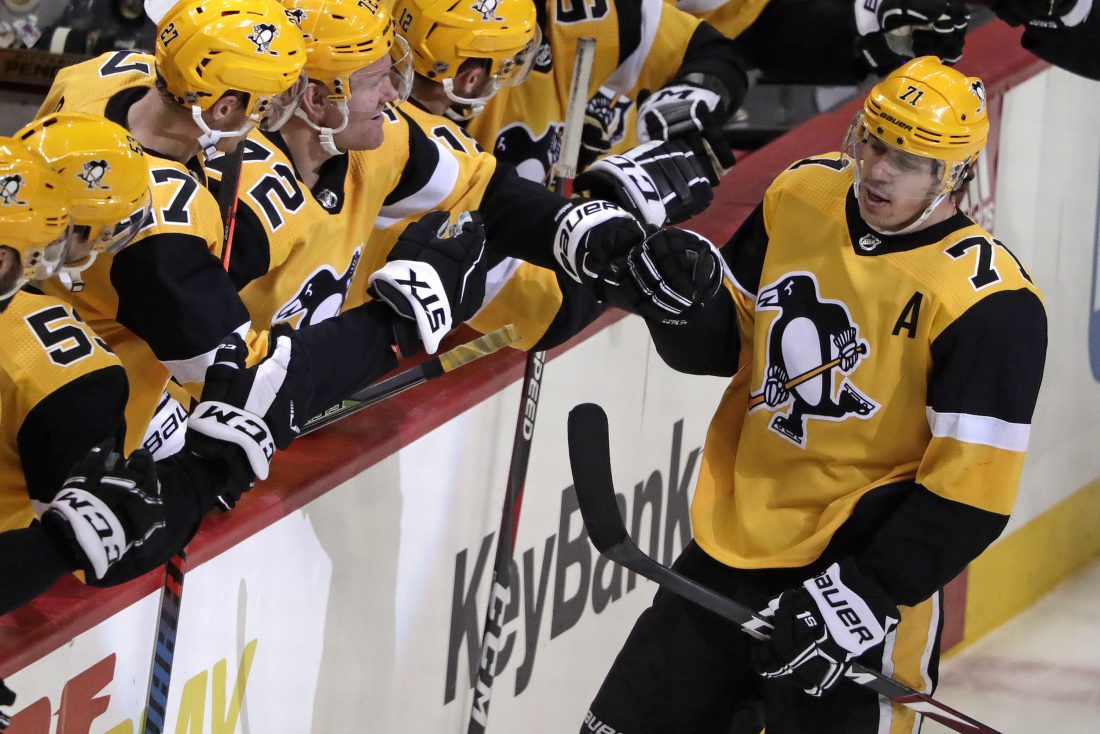 Pittsburgh Penguins' Evgeni Malkin (71) celebrates with teammates after assisting on a goal by Phil Kessel, for the 1,000th point of his NHL career during the third period of an NHL hockey game against the Washington Capitals in Pittsburgh, Tuesday, March 12, 2019. The Penguins won 5-3. (AP Photo/Gene J. Puskar)

PITTSBURGH — The cameras crowd around Sidney Crosby’s stall, parting only to let the Pittsburgh Penguins captain slip through and tug on a baseball cap before the lights flip on, the microphones close in and the questions come.

Fifteen feet away, Evgeni Malkin goes about his business quietly as part of his game-day routine, consulting with a staff member about a piece of equipment before ducking out, a star hiding in plain sight.

In another era or in another NHL city, it wouldn’t be this way. Yet this is Malkin’s lot, one the 32-year-old Russian and most recent member of 1,000-point club readily accepts. Drafted one spot behind fellow countryman Alex Ovechkin and one year ahead of Crosby — whom he’s partnered to win three Stanley Cups with over the last decade — Malkin is forever being nudged ever so slightly into the shadow of the two players who have defined the league for a generation.

“I think he likes it that way, to be honest with you,” said former teammate Brooks Orpik, now a defenseman for the Washington Capitals. “He lets Sid do a lot more of the media stuff. And he kind of does his own thing and flies under the radar. I think he’s good with that part of it.”

Even if Malkin’s affable public reticence plays in stark contrast to the way he goes about doing his job, where the 2012 Hart Trophy winner, four-time All-Star and two-time scoring champion is a study in contrasts. Hulking yet nimble. Intimidating yet imaginative. A 6-foot-3, 195-pound anomaly of speed, power and skill who joined Ovechkin and Crosby, San Jose’s Joe Thornton and Toronto’s Patrick Marleau as the only active players to hit four digits when he collected two assists in Pittsburgh’s 5-3 victory over Washington on Tuesday night.

Malkin picked up secondary assists on Crosby’s second-period goal and Phil Kessel’s third-period marker and celebrated by getting mobbed in the corner as the sellout crowd that included his parents and his wife rose to its feet in appreciation. Not bad for a kid from Magnitogorsk, Russia who never imagined he’d called America home.

“I grow up in small city and never think I play in NHL and score like, 1,000 points,” Malkin said.

Yet what once must have seemed impossible became inevitable as the years passed, the goals piled up and his reputation as one of the NHL’s most dynamic and daunting players blossomed.

“He makes it look easy, that’s the thing,” Crosby said. “It’s so effortless for him.”

Crosby offered a sequence during Pittsburgh’s 4-2 win over Boston on Sunday night as proof. Malkin collected a pass at the Penguins’ blue line, raced by Bruins forward Peter Cehlarik, slipped the puck underneath Boston defenseman Brandon Carlo’s flailing stick — spinning Carlo around completely in the process — then re-gathered it before ripping a wrist shot that soared over the crossbar. The whole thing took five seconds. Even now, 13 years into a partnership as productive as any in modern NHL history, Crosby couldn’t help but shake his head.

“You know how hard those things are to do?” Crosby said. “And to see him do it the way he does is pretty special.”

And also a well-kept secret of sorts.

When the NHL released its top 100 players of all-time in conjunction with the league’s 100th anniversary in 2017, Crosby and Ovechkin’s names were on the list. Malkin’s was not, a fact he tried to play off by joking that if he won a couple of more Stanley Cups he could be No. 101. His friends and teammates didn’t take it quite so well, with Orpik calling the omission “pretty outrageous.”

Maybe, but it’s also symbolic of Malkin’s unusual place in the NHL stratosphere. Famous, but not that famous. Well-respected. Just not quite as much as the two players he’s most closely associated with.

“I think of outside of Pittsburgh, I don’t think he gets the credit he deserves for the body of work that he’s put together in his decade-plus years as a Pittsburgh Penguin,” Pittsburgh coach Mike Sullivan said. “When you look at what he’s accomplished, it’s remarkable.”

It’s just that he happens to share a dressing room with the league’s most recognizable name and the same homeland as the greatest Russian player ever. Malkin’s 1.178 career points per game is second-highest among active players. Crosby is first. Ovechkin is third.

Even on the night Malkin reached elite company, he couldn’t hold the spotlight for long. Less than three minutes after reaching 1,000 points, Malkin watched Ovechkin set up John Carlson for a goal that made Ovechkin the 48th player to reach 1,200 points. Maybe it’s fitting. Crosby’s combination of talent and relentlessness helped make him the face of the NHL, with Ovechkin long serving as Crosby’s emotional counterpoint, raw and primal. Malkin’s persona — much like his stats — falls somewhere in between.

And no less effective. Malkin plays with a natural ease, producing highlight-reel plays with the casualness of someone goofing around at the end of a morning skate. That casualness is a testament to both Malkin’s immense ability and one of the primary reasons his production can be taken for granted.

What Malkin does is incredibly difficult. The fact he doesn’t make it look that way is both a compliment and a curse.

“Sid’s the hardest-working guy I’ve ever played with and I think he has to do that to be at the level he’s at,” Orpik said. “You can see Geno take a month off and come back and most guys are usually pretty rusty, he’s pretty much right at that level all the time.”

Well, maybe not all the time.

Malkin’s milestone moment came during an uncharacteristically uneven season. He didn’t score an even strength goal during November, his minus-23 rating heading into Tuesday ranked worst on the team and he’s shown a penchant for taking needless offensive zone penalties.

“It’s a tough year for me but every game, team play better and I think my game, it’s like back and I feel so much better every night,” Malkin said. “My confidence back.”

Pittsburgh’s best chances at emerging from the crowded race for a playoff spot in the Eastern Conference will rely heavily on Malkin being Malkin over the last three weeks of the regular season.

There have been signs of late, like his sizzling end-to-end rush against Boston or the way he quarterbacked a resurgent power play that scored twice against the Capitals. They are things that he’s done with astonishing regularity through the years, so much so that when he doesn’t do them the discussion centers on what he’s doing wrong rather than an appreciation for all the things he’s done right.

Those who get to witness his excellence on a day-to-day basis think it’s time for that perception to change. Malkin might not care. But they do.

“We all understand what he means to this team,” Sullivan said. “He doesn’t get the credit he deserves outside of Pittsburgh in the hockey world. He’s been one of the elite players in this hockey league for more than a decade and he deserves more attention for that.”