Shore’s Hunter O’Connor shines in opening round of States 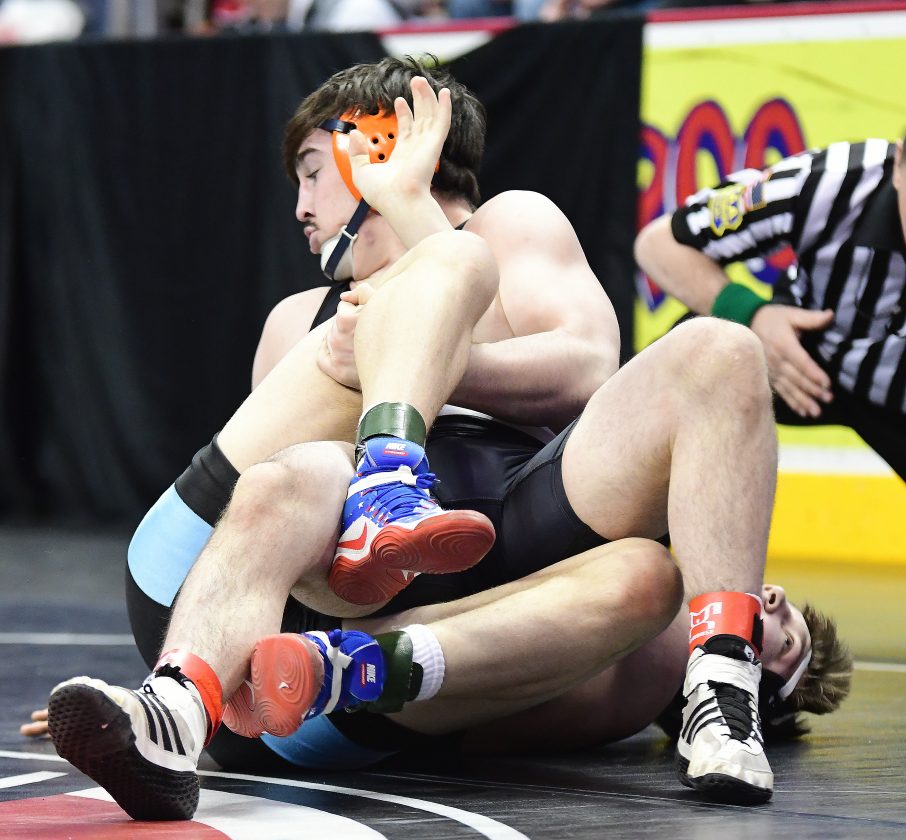 (FRANK DIMON/FOR THE EXPRESS) Jersey Shore's Hunter O'Connor looks for back points against Penn Cambria's Joseph Smychynsky during the PIAA Class AA Wrestling Championships at the Giant Center in Hershey on Thursday.

HERSHEY – Hunter O’Connor bided his time. He could feel Penn Cambria’s J.C. Smychynsky charging hard into him for a large portion of their 182-pound first-round bout Thursday.

The Jersey Shore senior knew the situation had to be just right to do anything about it. He needed to get to his underhooks and he needed Smychynsky to keep charging. When both those opportunities came to fruition in the third period of a one-point bout, O’Connor went for broke.

He hit a lateral drop on the edge of the mat for a five-point move which helped push O’Connor to a 17-9 victory and a spot in today’s quarterfinals at the PIAA Class AA Wrestling Championships. O’Connor was one of just four local wrestlers to win in the first round yesterday to advance to the quarterfinals. Montoursville’s Gable Crebs (195 pounds) and Cameron Wood (220) and Lewisburg’s Dakotah Snyder were all first-round winners.

For O’Connor, the victory in the first round was a first. In his two previous trips to the state tournament, O’Connor had never won that first-round bout, meaning a long run back through the consolation bracket. But that third-period lateral drop Thursday morning at the Giant Center all but sealed his spot in the quarterfinals.

“The whole match he was charging pretty hard. So I said if I can get some underhooks and he keeps charging hard, he’s going to go for a ride,” O’Connor said. “It worked out. Sometimes when I do that I end up pulling the guy on top of me, but this time I felt pretty confident with it.”

It was a big risk to take with O’Connor leading Smychynsky just 6-5. But O’Connor felt the reward was worth it. With a successful throw, the bout was all but over. Even if he got caught, he had nearly two minutes to make up for it.

“After that I just had to wrestle smart the rest of the way and don’t take any unnecessary risks,” O’Connor said. “That was a chance to kind of seal the deal.”

Those five points were the first of an 11-point third period for O’Connor which also saw him lock up a cradle for three near-fall points. And now, for the first time in his three trips to the Giants Center, O’Connor is into the quarterfinals.

As the top seed at 182 pounds, he said there’s a little more pressure to deal with. But he certainly didn’t wrestle like it yesterday. O’Connor was more than willing to open up his offense and continue to score points. With one more win today, he’ll earn a spot on the podium come Saturday for the second consecutive years.

“My coach and my dad were telling me you’ve been wrestling your match for the last three weeks, so don’t force anything if there isn’t anything there,” O’Connor said. “It was a little higher score than I wanted, and I did give up some easy takedowns. But it’s all part of that first match and getting it out of the way and going on to the next one.”

The next one is a matchup with Ellwood City’s Austin Walley, who is in his first state tournament and ranked fifth in the state. Whoever wins the morning quarterfinal is guaranteed a state medal and a spot in tonight’s semifinals.

“We’re down to some really good kids, so winning this first one gets some jitters out of the way,” O’Connor said. “Going into that next one with a win for the first time really is a good feeling.”

Snyder has waited for more years than he can remember for the opportunity to wrestle in the state tournament. The senior used all 6 minutes to pull out a win, scoring an escape with just eight seconds left in the third period for a 1-0 win.

After missing the state tournament by one win each of the last two seasons, Snyder said the nerves got to him in his first state tournament bout. But he settled in just in time to wiggle away from Glendale’s Cory Johnston and move to today’s quarterfinals against Greenville’s Jacob McMaster, a two-time state placewinner who’s ranked second in the state.

“Maybe next time I’ll get out a little sooner to save the fans and the coaches a heart attack,” Snyder said. “Down here, those guys you don’t know, you can pull the tricks out of your bag that they don’t know you have.”

Snyder endured a tough, physical ride from Johnston, who was able to keep Snyder down in the third period thanks to great forward pressure. But when Snyder was able to get off to the side, he found a way to sneak out of Johnston’s grasp for the lone point of the bout.

“It was crazy down here looking up and seeing everyone in the crowd,” Snyder said. “It’s a great atmosphere and the nerves maybe got to me in the match, but it’s good to get it out of the way and get a win.”