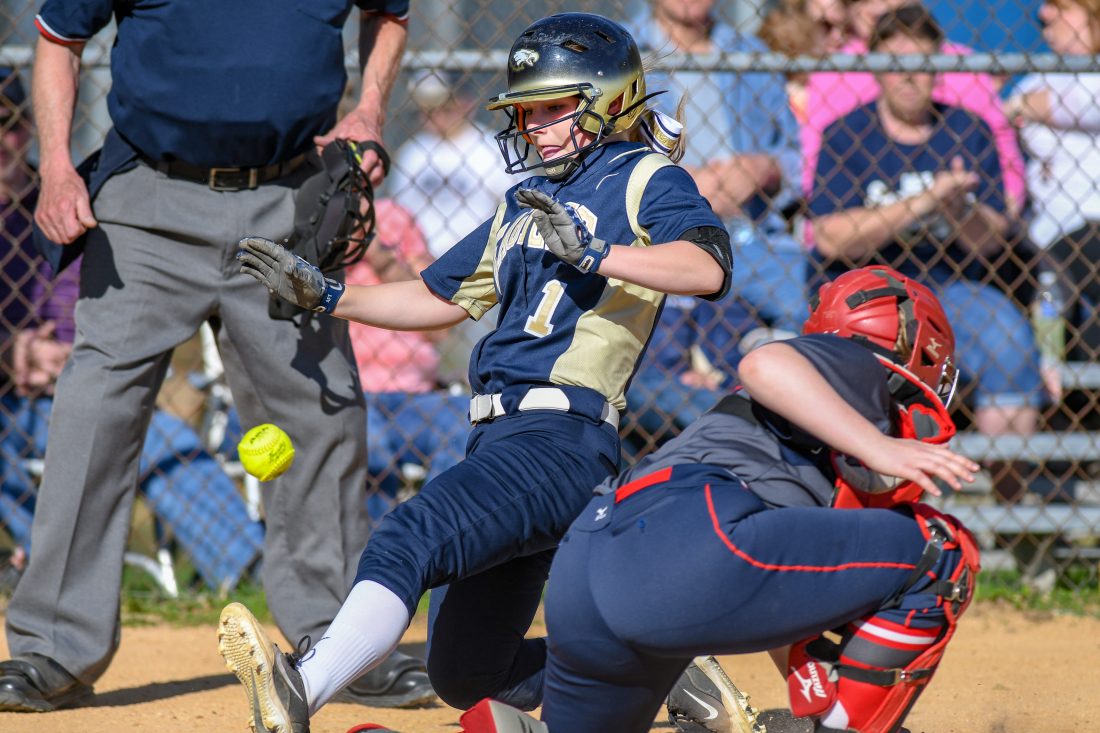 MILESBURG – They were locked in from the beginning.

Starting out a very busy week, the Bald Eagle Area softball team wasted little time in getting on the scoreboard in their contest against Mountain League foe, Huntingdon.

With 12 batters at the plate in the bottom of the third, the Eagles plated an 8-run inning and never looked back, winning 17-3 in a five inning game.

Bald Eagle got a strong-pitching effort from Madison Fisher who went 3 1/3 innings, allowing three runs on six hits. She struck out six while walking just won in the victory.

“We really squared up on the ball. We talked earlier about stepping up to the ball and string hits together and do the small things. We got four innings out of Madison Fisher,” Bald Eagle Area coach Don Lucas said. “That’s what we need from these second pitchers to give Peters a break. It’s going to be a long week and we are going to need her tomorrow and probably Friday. Tonight was a total-team effort.”

Fisher opened the game striking out Lauren Heintzelman and Gabby Brown, and then forced Destiny Birensdorfer to fly out.

BEA leadoff hitter, Makena Baney, walked to get the inning off on the right foot.

Mara Hockenberry sacrificed Baney to second. Baney then advanced to third on a wild pitch.

Peters helped Fisher’s cause, blasting a 2-run double into left field. She advanced to third on a throwing error on the play.

Her stay was quick as Tobias doubled in Peters, making it 3-0.

Madison Perry reached on an error by the shortstop, scoring Tobias.

Fisher added a little offense to go with her performance as she doubled in Perry.

Courtesy runner, Hailey Bucha came in for Fisher. She would later score on a single and an error by Madison Eckley, upping the advantage to six.

Baney came up for the second time in the inning and poked an RBI single into left, scoring Baney.

Hockenberry would end the first inning scoring when she doubled in Hockenberry, upping the Bald Eagle advantage.

Fisher continued to dominate on the mound, shutting down the Bearcats’ bats.

After allowing two Huntingdon walks, Fisher regrouped and struck out the next three batters.

In the second, Peters started things off by taking an offering in the back. She later came in on another Tobias double.

Fisher reached on a walk to put runners on first and second. She was again replaced by Bucha. Both moved up to second and third.

Bucha later scored on a double to left by Hockenberry.

As the game entered the third, the Eagles held a commanding 13-0 advantage.

Huntingdon battled back in the top of the third, posting two runs.

However, Bald Eagle would extend its lead even further, taking a 16-3 advantage going into fourth.

The Bearcats fought to the end, plating one run in the fourth.

But Peters would put the game on ice as she roped a home run deep into left.

She then came on in relief and shut down the Bearcats to end the game, 17-3.

Bald Eagle takes to the road Tuesday as they go up against Central.