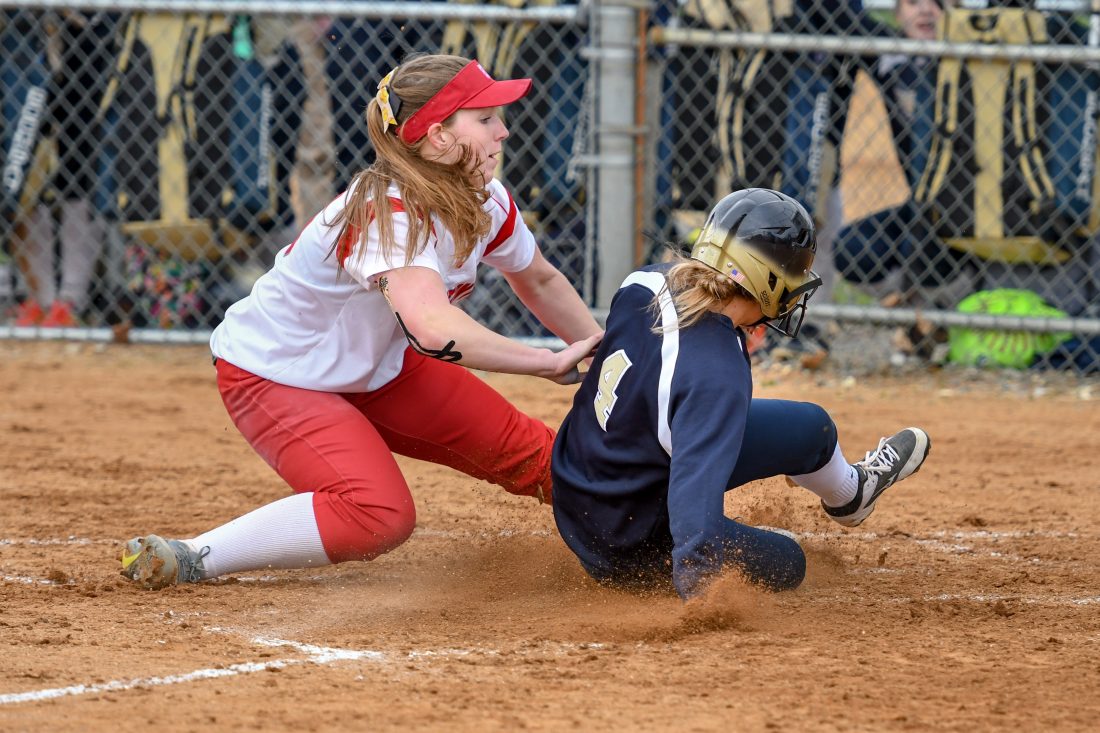 BELLEFONTE – Some will call it an instant classic.

When the Bald Eagle Area and Bellefonte softball teams get together– fans on both sides of the field know they are in store for a treat.

Tuesday night’s abbreviated game was a conclusion from the original Friday contest that ended tied at two in the end of the fourth.

The game was suspended to Tuesday because of a torrential downpour.

In the end, the two would go nine innings before Bald Eagle’s Mara Hockenberry scored on a past ball, picking up the 3-2 victory.

“Games like this play dividends at the end of the year. The Rogers (Lexi) girl is a quality pitcher. We squared up on the ball today and manufactured a run,” Bald Eagle Area coach Don Lucas said. “Hockenberry’s speed just makes things happen. We put pressure on the defense and found a way to win.”

On Friday’s portion, Bald Eagle led off the game playing a run in the first.

Hockenberry led off the inning with a 1-out single. She stole second and third. Ironically, she also scored then on a wild pitch, making it 1-0.

With Maddie Peters on the mound, the Red Raiders wouldn’t find the scoreboard until the third inning.

Rogers also settled in on the mound and kept the Eagles at bay until the top of the fourth.

Makenna Port led the charge for Bellefonte in the third, singling to right field.

She then scored when Lily Gardner dropped a picture-perfect bunt and made it to first.

On the throw, Gardner reached third on two errors on the play, Port hustled around from second and scored on the miscue, tying the game at one.

With the clouds rolling in, the Eagles tied things in the top of the fourth.

Hockenberry again led the spark. She walked on her second at bat. She reached second on a sacrifice bunt by Maegan King and then reached third on another pitch that scurried away from the catcher.

Hockenberry tied the game at two when Peters hit a sacrifice fly to center.

Peters held Bellefonte scoreless in the bottom of the inning.

Then the rain drops started and before the teams had time to take the field to start the fifth, the game was silenced until Tuesday.

After nine innings, Hockenberry reached one last time and moved up to score on two past balls en route to the winning run.

Despite the loss, the Red Raiders might see this game as a moral victory and one that could potentially be the start for better days to come.

“We talk a lot about the mental part of the game, more than the physical. Yes, we hit. Yes, we field. We talk a lot about what we are doing mentally and tonight I think it showed. Our kids are mentally tough because we spend so much time teaching and talking about it and it’s important to us,” Bellefonte coach Travis Foster said. “We had two good pitchers facing each other on the mound tonight. We had Maddie (Peters) doing a great job and Lexi (Rogers) doing a great job. When you got two great pitcher going against each other you are going to have a fun and intense game. You can’t ask for more than a 3-2 extra inning-game. Yes, it stinks losing and we’re hurting. And we should. It hurts to lose but we really competed. We played well and they played well. Someone had to lose.