Bucks softball remains perfect on the season with win over Millville 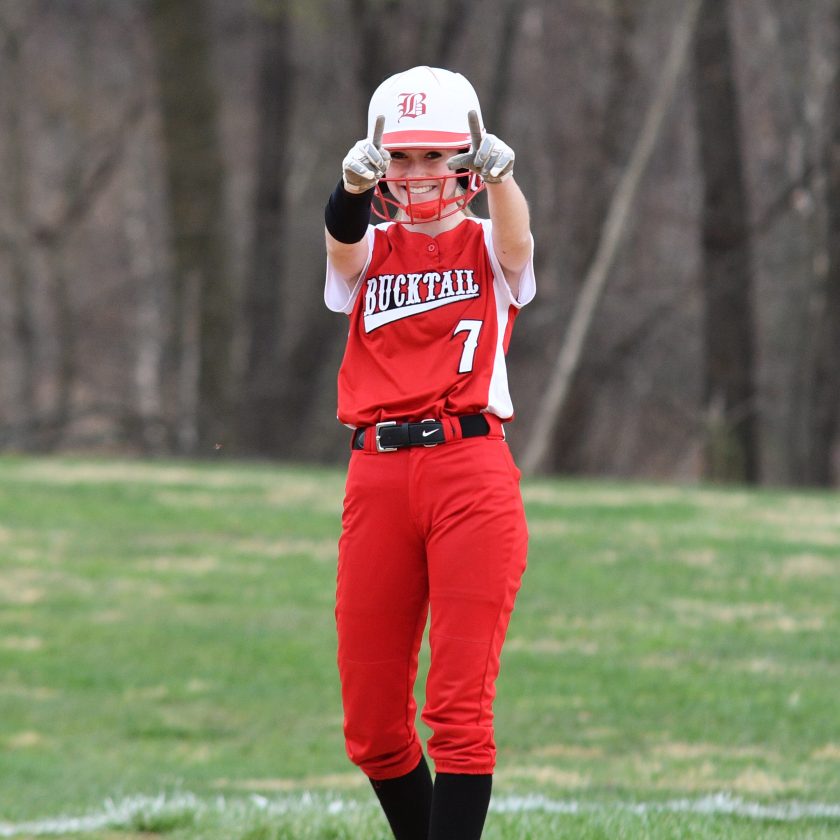 (KEVIN RAUCH/FOR THE EXPRESS) Bucktail freshman Jordan Burrows was all smiles in pointing toward her teammates as the Bucktail leadoff batter started the game off with a triple for the Bucks.

MILL HALL-“What’s better than 8-and-0?” That was the breakout cheer that the Bucktail softball team yelled out Wednesday night after they beat Muncy in what has become the customary chant of the team as they continue to celebrate their undefeated season.

“9-and-0” was the reply and just 24 hours later that was exactly where Bucktail found themselves as the storybook season continued last night with a 14-4 win over Millville.

The team is showing talent on both sides of the ball; throughout the lineup as the more they play the more of a powerhouse they’ve become.

Quaker leadoff batter Linsey Fisk actually started the game off well for the visiting team by crushing a Myka Poorman offering well over the left field fence just foul of a home run. Fisk would eventually double before putting Millville up, 1-0.

Bucktail seemed to thrive at the chance of a competitive game, almost relishing being down so that they can come storming back and that’s exactly what they continue to do.

Bucktail leadoff batter Jordan Burrows began the rally with a triple, before stealing home and tying the game at 1-1. Kayli Casper gave the Bucks the lead with one of two hits that the left-handed batter would knock to left field during the game. Raleigh Isaacs kept the rally going with a fielder’s choice as the Bucks quickly answered back and led 3-1 after the first inning.

Once they have the lead it has become Bucktail-ball to just chip away at the ten-run rule throughout the rest of the game.

Just as she did the night before, ninth batter Emma Intallura turned the top of the order off by getting a hit and setting things up for the big hitters to come behind her in the bottom of the second. Emma Poorman kept her amazing streak going from the plate as she picked up a 2-run single to move the lead to 6-1.

Millville tried to make a game out of it in the top of the third by taking advantage of Fisk getting hit by a pitch. Magi Earnest picked up a hit before Abby Rose crushed a triple to left, eventually scoring herself, cutting the lead to 7-4.

Mike Poorman went with a pitching change to freshman Emma Poorman who allowed only two base runners the rest of the game for Millville as she retired nine out of the 11 batters that she faced.

“Millville really hit Myka hard last season, so it was real nice to see her pitch so well against them today. But when you have Emma to go to behind her the way that they complement each other really keeps opposing batters guessing as what’s to come,” the coach said following the game.

With the Quakers being shut down at the plate the Bucktail bats went back to work. Intallura turned a small miscue by Millville’s left fielder from a single into a three-base error, allowing her to start off the bottom of the fourth with a run scored on just one at bat. Casper again went to the opposite side of the field with a 2-run double.

Freshman Emma Poorman’s RBI count has taken on a life of its own with area softball fans as it’s common to hear fans totaling the slugger’s statistics, which now stands at 41 RBIs after nine games as she picked up six for the second night in a row.

“Emma couldn’t be any hotter right now,” Poorman said simply of his daughter’s efforts following the game. The coach was also quick to smile and praise a double play that Emily Cross fielded at short and Tessa Cowfer turned from second. “Our middle infield has wanted to do that all season, they came close twice before, but they really wanted that tonight.”

“That was a big win, Millville is a hard hitting team, but even when they drive the ball, like in the final inning, we have plays where Emily Cross shows great range (from shortstop) and knocks the ball down. We’re just getting consistency all over the field and our record is a result” Poorman finished.

Bucktail posted the school’s best season ever two years ago when they went 10-9. They will look to tie that ten-win mark in just as many games when they host Montgomery on Tuesday, the one team the Bucktail coach still feels will prove to be his teams’ toughest in league opponent.