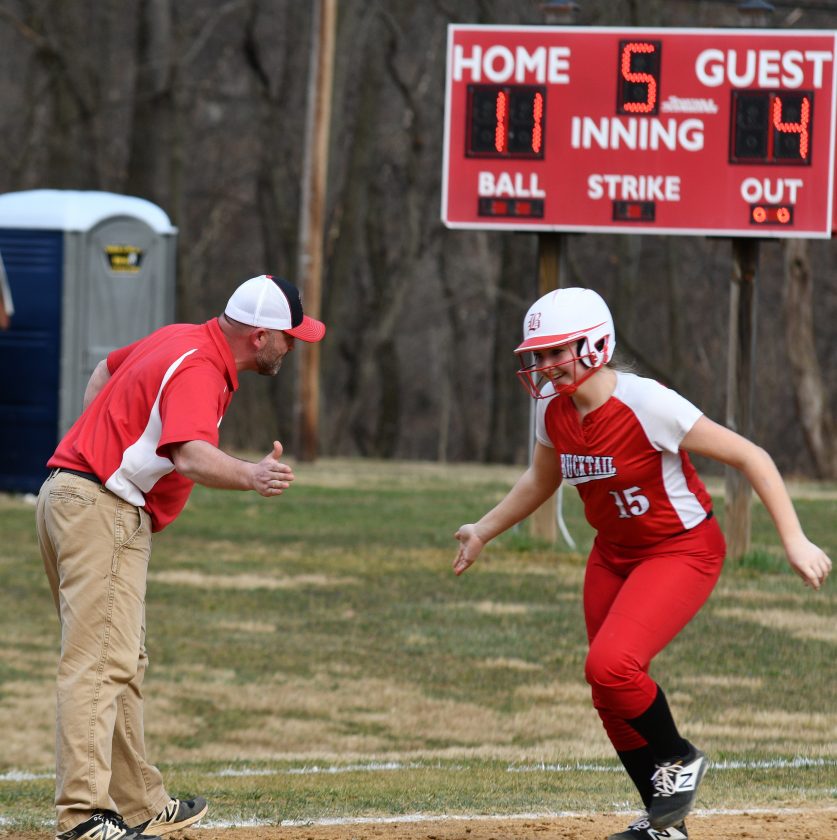 (KEVIN RAUCH/FOR THE EXPRESS) Bucktail coach Mike Poorman and his daughter, Emma, celebrate a grand slam that the freshman hit as she has helped to pace her team to a 9-0 start.

Those numbers would be considered a dream season for any high school softball player. At Bucktail this spring those statistics have been put up in just the first nine games of the season. Even more unbelievable is that they belong to a freshman, which typically means that the 9th grader can often be expected to be playing against juniors and seniors as old as 17 and 18 years old.

Emma Poorman has thrown expectations and norms out the window as she has helped to pace the Bucktail Bucks to a 9-0 start, just one win shy of a school record with half of a season remaining.

Emma’s father, Mike Poorman, coaches the Bucks and when asked if he had any idea that this type of start for his youngest daughter was possible, he immediately laughed “no, of course not, this has just been phenomenal.”

Mike felt that he had something special coming over the next few seasons several years ago. In 2017 a corps of freshmen, including his oldest daughter Myka, led the school to their first winning season and a home playoff win. Still, the coach knew that the 2019 group of freshman would eventually join the team and make it even more complete. He could not have been more right considering the 9-0 start.

It’s been undoubtedly a team effort. As Emma’s 41 RBIs suggest- you don’t get that many runs batted in without the batters in front of you hitting well and getting on base.

Still, it has been those 41 RBIs that seems to be the number that fans have cheered on after celebrating the undefeated season. Almost comically those same fans watching the RBI count may not even realize that Poorman is 5-0 from the mound.

“The first year Emma played softball she hated every second of it and didn’t play for a couple of years after that,” Mike explained of his daughter’s entry into the sport.“Then in 5th grade she came back out for ball and this time loved it, even though nothing came easy for her.”

Mike said that he believes Emma started playing again for more family time, particularly with him. Older sister Myka has been a stand out since a young age whereas Emma wasn’t the natural that Myka was.

The Poorman’s live the softball-life year round. Mike and Bucktail assistant coach Chuck Cross restarted a youth program for Renovo years ago when there hadn’t been one for a small stretch. From there Mike and Chuck had their daughters in summer ball, traveling from Buffalo, New York to Ocean City, Maryland when school softball was not being played.

Mike has no doubt that seeing that type of competition over the last five years has been what has led to Emma’s success. “We were seeing opponents built like college teams, very elite teams,” he remarked.

The coach said his daughter slowly learned to start choosing and exceeding goals. It’s been instrumental to her success. Those goals started small but have grown drastically with the biggest currently is having her wanting to play softball in college.

Emma’s instant success in varsity has helped to revive “Buck Fever.” On those occasions during a home game when the 9th grader strides to the plate with the bases loaded, the fans don’t contain any of their excitement. Cheers of “let’s go Emma-Lou” are instant as are expectations of something big is about to happen. Poorman has answered those cheers every time so far including a first-pitch grand slam against Benton.

When asked if those expectations were a little too lofty for his 15-year old daughter, Mike said he could not be more proud of how she has handled it.

“To be honest, I don’t think that during the games our girls even realize how big the crowds are getting, let alone hearing certain cheers. Emma said to me the other day that things seem to slow down for her when she’s playing, she’s seeing the spin on the pitches as they come in, that’s the kind of things that you hear the pros say,” he explained.

“She’s been very humble and grateful for the recognition that she has received, I’m as proud of her for that as I am of what she’s done on the field,” the coach said.

The home fans got to see Emma’s first intentional walk last Thursday when Millville gave her a free pass to first. Although the strategic move was likely the correct one it drew the ire of fans.

“That’s something that I expect to see more of the second half of the season,” Poorman said as they will begin to see league opponents for the second time around.

Assistant coach Chuck Cross has also seen the natural progression that Emma had shown in recent years take a dramatic jump this spring.

“I certainly never saw this coming, it’s insane,” said Cross. “41 RBIs in nine games is just crazy; she has so much power in hitting the ball. Her pitching, too, has just been amazing, if it’s even possible we’re just hoping that she can keep it up,” laughed Cross.

Both coaches stressed that although Emma has been the highlight of what has been happening at Bucktail, it has been a team effort that has led the team’s 9-0 start.

“Our juniors have been doing exactly what we have expected of them now that they’re in their third varsity season” Mike said. “Look at the way Emma Intallura is turning the lineup over from the ninth spot in our lineup. Myka and Emily Cross have been as consistent as ever. We have Tessa Cowfer batting fifth after Emma (Poorman) and to me that’s like having a second leadoff batter in the lineup.”

“Jordan Burrows and Julie Green have had great freshmen starts as well, this is a team thing that we having going for sure,” Mike continued.

Bucktail is scheduled to host Montgomery Tuesday afternoon, the one team in the league that may be able to slow down the Bucktail machine and their fabulous freshman.