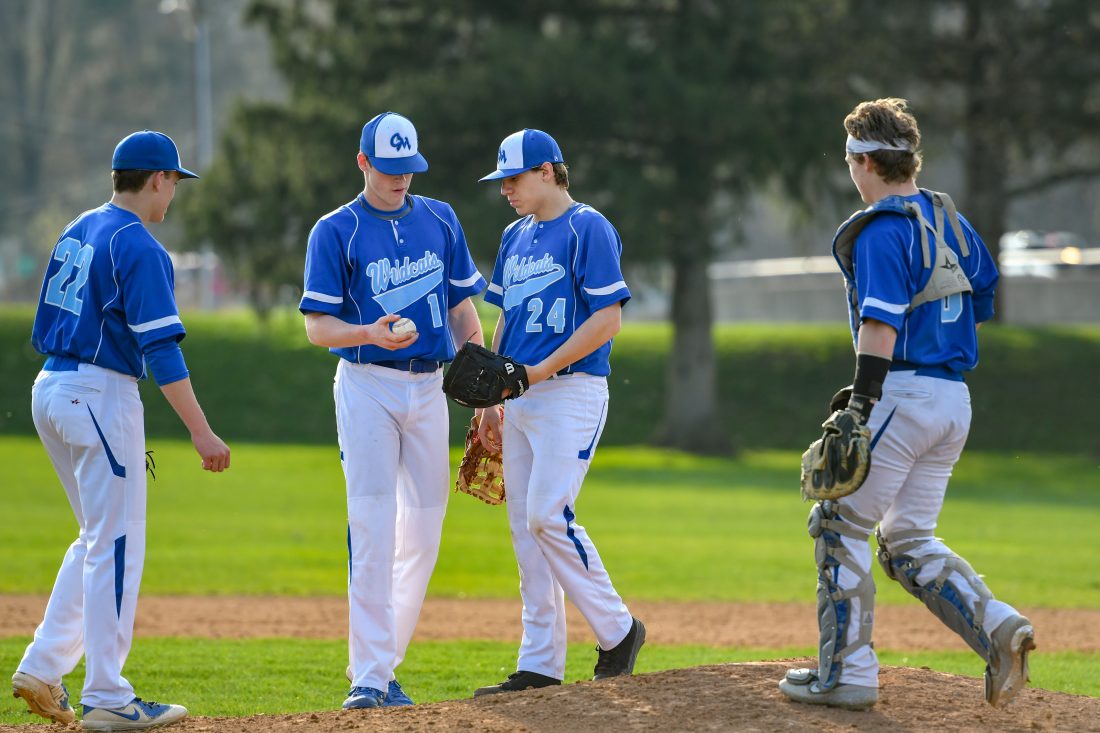 That was the theme of the week for the Wildcat Baseball team as they won in their last at bat in back-to-back games. After an 11 to 7 victory at Dubois on Monday, the Wildcats returned home to win two thrillers on consecutive days, Wednesday and Thursday. In the victory over Dubois, the Wildcats collected 12 hits to outslug the host Beavers. On Wednesday, in Mill Hall, the Wildcats hosted league opponent Danville. Runs in both the 6th and 7th innings, were needed for Central Mountain to earn the come from behind walk-off win. Walk-off win number two came the following night when the surging Wildcats came from behind for a 7 to 6 win. The Wildcats entered the bottom of the 7th down 6 to 3 but were able to scrap together four runs to earn the win. The final two runs came on a two-out two-run double off the bat of Zane Probst. Understandably, Coach Mike Kramer was pleased with his team’s effort.

“This was a good week. 3 -0 against three good teams with two walk off wins. The team demonstrated poise when faced with adversity. The trust in teammates and belief in each other was evident in those two come from behind wins,” Kramer stated about his cardiac kids.With the undefeated week, the Wildcats overall record now stands at 6-3.

The softball team split a pair of games last week as they defeated Selinsgrove at home on Tuesday before being beaten for the second time this season by Mifflinburg. In the win over Selinsgrove, CM was actually out-hit 9 to 6 but they were able to hold off the Seals for a 4 to 3 win. On Thursday as they traveled to Mifflinburg, CM was seeking a little revenge for a home defeat that they had suffered at the hands of the Mifflinburg ladies about two weeks ago. What they most needed to figure out was how to get a hit, as they were unable to register one in the first meeting between the two teams. This time around CM was able to jump out to a 3-2 lead after two innings of play. However, they were unable to generate any more offense and saw the host team erupt in the fifth and sixth innings for 10 runs to again down CM by the 10-run rule in six innings, 14-3. With the split of games, the team is now 4-5 on the season.

Boys’ tennis was in action just once last week, earning a 4-1 victory over league foe Shikellamy on Tuesday. The Wildcats got singles wins from Gavyn Walker and Ujjval Adroja, as well as victories in both doubles matches to earn the team victory. With the victory, the Wildcats pulled close to the .500 mark at 5-6 on the season.

Boy and girls track and field were also in action just once last week, a match-up with rival Jersey Shore on the road. While few details were available from that meet, CM head coach Danielle Wilson had this to say about her team’s effort, “I was really impressed at how much effort the kids put forth and the willingness of some kids to try events they hadn’t done in order to try to get us points. There might be more that I’m not aware of, but shout-outs go to Jacob Watson for his efforts in the 4 x 100 and 300 hurdles, Brett Gerlach in the 200, and Zander Tuttle in the 200. Those guys stepped up when they didn’t have to.”

Athlete of the Week: This week I’m going with a pair of Wildcat senior baseball players, Tanner Lavelle and Aaron Swartz. Lavelle had a good week at the plate finding himself in the middle of a considerable amount of the action for the Wildcats. Swartz continued to register quality innings on the mound while maintaining a solid presence at the plate as well.

Team of the Week: An easy selection this week, The Wildcat baseball team. Three wins including two in walk-off fashion makes this one a no brainer.

Looking Ahead: There are no scheduled events for the CM teams today which only means they will be busy the remainder of the week. Baseball will play three games again this week including a huge match-up on the road tomorrow at state title contender Montoursville. The softball team will host games on Tuesday and Thursday this week against Milton and Altoona. Track and field will be in action just once, tomorrow hosting Mifflinburg. Finally, the Wildcat netters will host Milton tomorrow and travel to Selinsgrove on Thursday. Those matches will sandwich the District VI singles tournament on Wednesday in Altoona. My anticipated game of the week is…baseball at Montoursville. That contest should definitely be a good one.