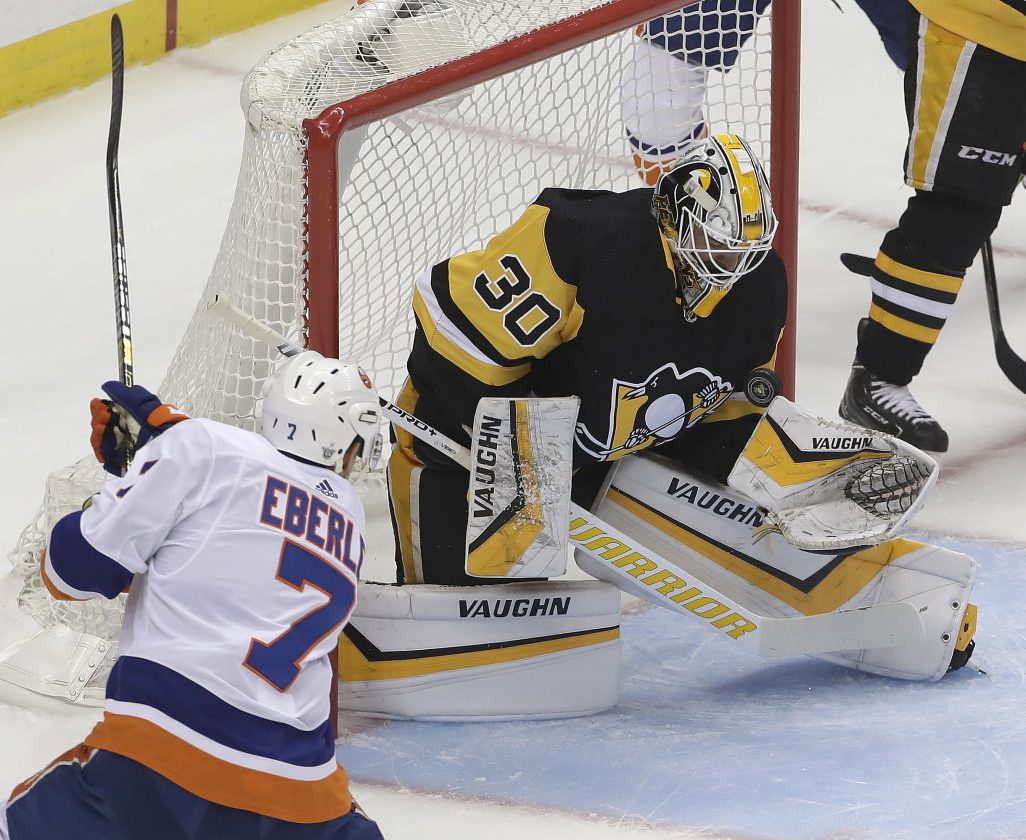 PITTSBURGH — The New York Islanders don’t play a particularly sexy brandy of hockey. They forecheck. They backcheck. They block shots and take few risks, more focused on fundamentals than flash.

It’s a style designed to frustrate opponents regardless of pedigree, one that has them on the cusp of just their second playoff series win in more than a quarter-century.

Jordan Eberle and Brock Nelson scored 62 seconds apart in the first period to quickly erase a rare deficit, Robin Lehner stopped 25 shots and the Islanders moved within one victory of finishing off Sidney Crosby and the rest of the frustrated Pittsburgh Penguins with a 4-1 win on Sunday to take a 3-0 lead in their best-of-seven Eastern Conference quarterfinal.

It’s heady territory for a franchise that’s advanced past the first round just once since 1993. Yet the Islanders certainly look like they belong on the big stage. They’ve outscored Pittsburgh 11-5 through three games and have trailed for less than four minutes through nine-plus periods against a team that began the playoffs looking to capture its third Stanley Cup in four years, a dream that’s all but vanished.

“We kind of did our best to play simple hockey and really just grind it out a little bit,” said New York forward Anders Lee, whose empty-net goal with 1:28 to go pushed the Islanders to the cusp of an unlikely sweep.

It’s what the Islanders do.

While they lack Pittsburgh’s offensive firepower, they’ve made up for it with depth and resiliency. Rather than get rattled after Garrett Wilson gave the Penguins just their second lead of the series when he redirected a point shot by Lehner just past the midway point of the first period, the Islanders responded immediately.

Eberle beat Matt Murray short side from just above the goal line 28 seconds after Wilson’s score to tie the game and Nelson finished off a 2-on-1 to put New York in front to stay just over a minute later. Lehner withstood a series of pushes by the Penguins, and the Islanders counterpunched brilliantly in the third period behind goals from Leo Komarov and Lee to pull away.

“Playoffs are all about momentum,” said Eberle, who has three goals in three games. “When you can take some team’s momentum away and just continue to build yours, it’s key.”

Matt Murray finished with 32 saves for the Penguins, but Pittsburgh again struggled to generate any sort of sustained offensive pressure.

New York, which allowed an NHL-low 196 goals on its way to a second-place finish in the Metropolitan Division, has clamped down on Crosby and linemate Jake Guentzel. The two — who combined for 75 goals and 101 assists during the regular season — have yet to record a point in the playoffs.

Pittsburgh needs a win in Game 4 on Tuesday to avoid being swept for the first time since the 2013 Eastern Conference finals against Boston.

“You’ve got to find ways to score goals this time of year,” Crosby said. “It’s not easy but you’ve got to find a way to do it and obviously we haven’t done a good job of it through the first three games.”

The Islanders controlled Games 1 and 2 back home on Long Island to take the franchise’s first 2-0 postseason lead since the 1983 Stanley Cup finals, when they completed their run of four straight championships by sweeping Wayne Gretzky and the Edmonton Oilers.

The Penguins insisted it wasn’t time to panic, with coach Mike Sullivan downplaying the idea his team needed to play with desperation. Still, he opted to tinker with his lines in search of a spark, elevating Dominik Simon to the top line alongside Crosby and Guentzel and putting Jared McCann — who sat out Game 2 with a lower-body injury — on the second line with Evgeni Malkin and Phil Kessel.

It didn’t quite work. Simon had a chance to even the score late in the first period, but Guenztel’s crossing pass at the end of a 3-on-1 headed to Simon’s stick instead of his skate, emblematic of a series in which few bounces have gone Pittsburgh’s way. Not that the Penguins were looking for sympathy.

“If we work hard and do the right things, we’ll earn our bounces,” Crosby said.

The Islanders have certainly earned theirs.

Now they find themselves in a spot that seemed improbable at best a week ago: heading to Game 4 with a chance to make Pittsburgh’s playoff stay the shortest of the Crosby/Malkin era. They’re also aware the next victory will be the hardest to come by.

NOTES: Four teams have rallied from 3-0 deficits to win a best-of-seven series, including a victory by the Islanders over the Penguins in 1975. … Pittsburgh went 0 for 3 on the power play to drop to 1 for 8 with the man advantage in the series. The Islanders went 0 for 2 on the power play, squandering a 30-second two-man advantage in the second period. … Penguins F Jared McCann skated 14:23 after missing Game 2 with a lower-body injury.