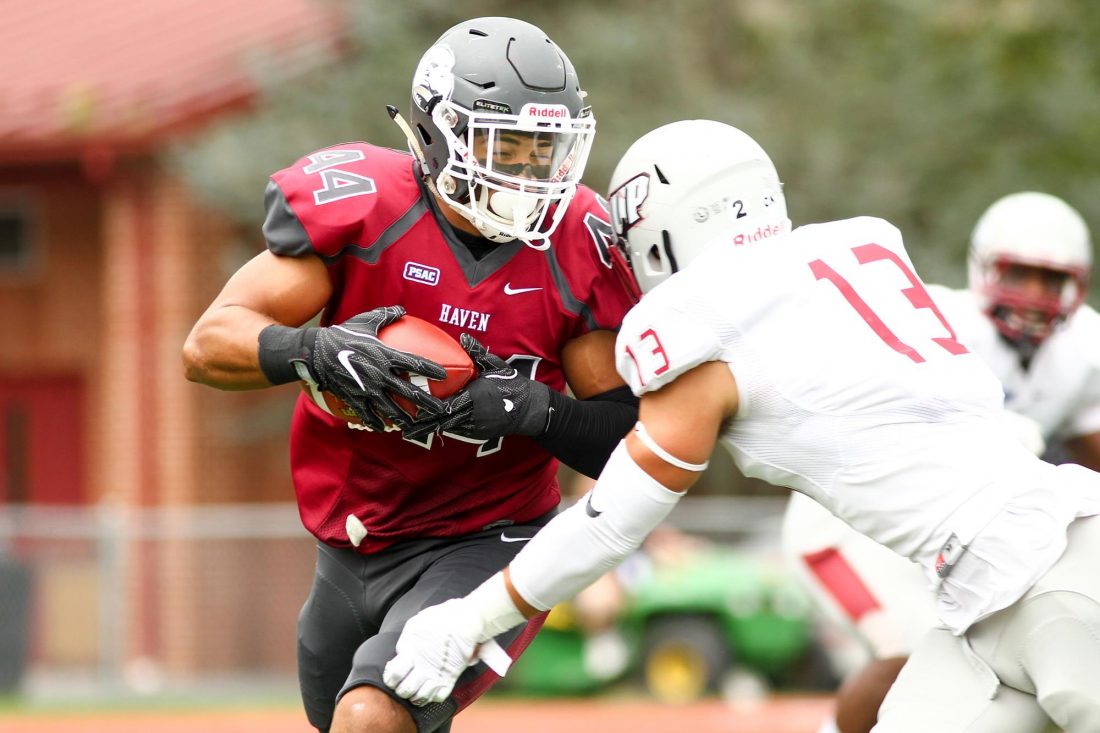 LOCK HAVEN- As Lock Haven University football moves through the middle of its spring football schedule, the team continues to make strides. When fans flock to Hubert Jack Stadium April 13 to watch the Bald Eagles, a lot of eyes will certainly be on reigning All-American tight end Jalen Jackson.

Last season as a sophomore, Jackson finished with 44 catches for 537 yards and seven touchdowns. These are atypical stats for a college tight end, but the Williamsport native has found a great fit on this team. He looks to improve in another key area of his game, his blocking.

“That’s one of the things I have to continue to work at every day because it doesn’t come naturally to me,” Jackson said

In 2018, the 6-foot tight end weighed around 210 pounds. Coach Dave Taynor believes Jackson has put on roughly 10 pounds of muscle over the offseason, something that should help tremendously in his blocking efforts.

Lock Haven’s offense features the tight end more than most, and Jackson has been the perfect fit in it as a starter during his first two years at the Haven. His ability to line up in the backfield and in a variety of tight end spaces enable him to cause match up problems for opponents.

This was especially on display in the team’s season finale, a 50-48 victory at Gannon on a snow-covered afternoon in Erie. That day Jackson caught eight balls for 136 yards and three scores. That performance put him over the top in his quest for All-American status.

“It was a great honor,” Jackson said about earning a spot as an All-American. “It was one of the goals I set. I have a little board in my room that has all of the goals academically and athletically. I was just happy I hit it as soon as I did.”

Taynor is also extremely pleased with where Jackson is on his career trajectory.

“You always enjoy when a guy receives an honor that he earned,” Taynor said. “He’s a local guy, who once he committed to coming here has worked his butt off every single day and has grown into a player because of what he’s earned.”

Jackson is poised to parlay his abilities as a pass catcher with his improvements in handling his blocking responsibilities. With Lock Haven losing a majority of its starters from the offensive line to graduation, Jackson’s improvement here should come in handy.

Jackson is also excited to take on the task of leadership, as a young Lock Haven group will surely look up to someone who has accomplished what Jackson has in his first two years with the program.

“That role is one of the roles I’ve always cherished,” Jackson said. “I was in that every sport I played, I was always in some type of leadership role. That’s no different here. People look up to me and I have to take that and run with it.”

Jackson will also be aided in both the success of the passing game and the leadership of younger players by redshirt-sophomore quarterback Kyle Knight.

After missing the final 10 games of last season with a torn ACL, Knight is well ahead of schedule, and is doing all non-contact drills with the team during spring ball. Knight looked Jackson’s way often in 2018, when Jackson led all PSAC-East tight ends in receiving yards.

“My first year Jalen was kind of like my security blanket, I would always go to him, I would always find him,” Knight said. “And I could hit him with a ball and he’ll catch it.”

With the return of Knight, and a year of game experience under fellow redshirt-sophomore quarterback Ethan Persa’s belt, that position group is expected to make some major improvements from last year. This should immensely benefit Jackson, as he and his teammates look for him to grow even more as a player.

“His growth I think is just feeling,” Knight said. “In college football you just have to get a good feeling. I think he’s getting a better feeling of where to run the routes, where to get open, where to find the open field.”

As Jackson continues to work feverishly on the field and in the weight room, he hopes to be a complete player in 2019.

“It just completes me as an athlete,” Jackson said of his blocking abilities. “I want to be the best in all facets of the game, and that’s one of the ones I’ve really lacked over time. If I get that, I can say that I’m pretty complete at the position I play.”

Lock Haven seeks to improve upon last year’s 2-9 mark. With a young defense back for the Bald Eagles, the ability of the offense to hum like it did in that Gannon victory will be crucial in seeing how high the Bald Eagles can soar.

One thing that’s very apparent is that Taynor and his staff successfully recruited and developed a real building block for their program in Jackson.

“He’s an All-American with a 3.5 GPA,” Taynor said. “He’s the kind of guy you want to build your program around.”