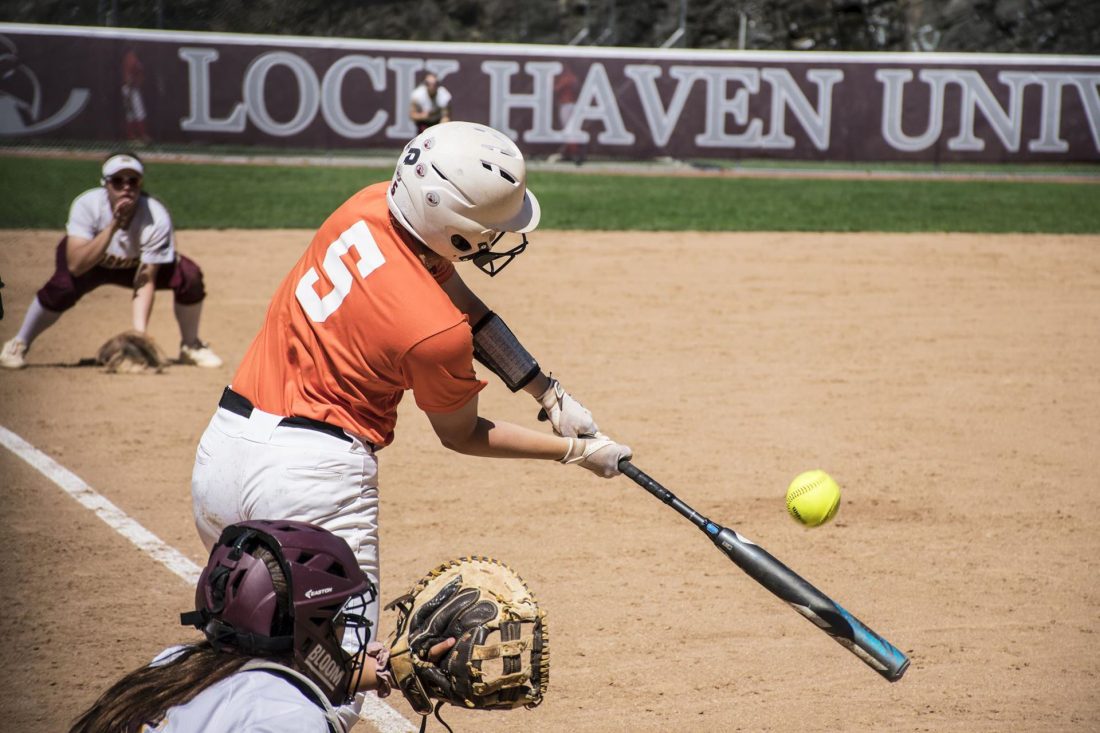 LOCK HAVEN — If you would ask any member of the Lock Haven University softball team what could possibly be sweeter than a box of chocolates on Easter weekend, they just might tell you two wins over arch-rival Bloomsburg.

Three weeks after getting swept by Bloomsburg University at Jan M. Hutchinson Field, the Lock Haven University softball team was hoping to return the favor to the Huskies at Lawrence Field Saturday afternoon.

With threatening skies to begin the afternoon turned into bright sunshine, everything came up roses for the Bald Eagles as they swept the Huskies by scores of 7-0 and 3-1 to return the favor.

“We knew that we didn’t play our best softball when we went down there a couple of weeks ago,” said LHU coach Kelly Shannon. “We had a good day at IUP. We didn’t make adjustment in the first game, but the second game was pretty good. Up to this point we haven’t been able to put together two real good games and today they did. They just fought the whole day and I am very proud of them.”

The story in game one was clutch hitting, tight defense and outstanding work in the circle by veteran pitcher Bekah Slattery. Slattery went the distance, scattering three hits, walking two and striking out nine.

“After dropping two at Bloom our goal today was to come out and kick their butts” said Slattery wearing a big smile. “We set the goal, we knew we could do it and that is what we did.”

Carrying the big sticks for LHU in the 9-hit Bald Eagle offensive attack were Rachel Gricoski and Amanda Criss with two hits apiece, while five others chipped in the attack as Chloe Kennedy, Casey Carpenter, Traci Kromko, Slattery and Bree Hilty each added one hit.

Two of LHU’s hits were of the extra-base variety as Slattery helped her own cause with a 2-run triple and Carpenter belted a 2-run home run.

“This is the first doubleheader that I saw them really swing it,” said Shannon. “We knew we had to make an adjustment from the first pitcher to the second pitcher because the Baney girl (Bellefonte’s Tara Baney) throws hard. They didn’t back down from her and they took good cuts. Sometimes we hit balls right at them and other times they were hard to field. All I can ask of them is to put solid contact on the ball.”

In the second game, the Bald Eagles broke open a scoreless deadlock with a pair of runs in the third before going up 3-0 with a single tally in the fifth.

In the third, LHU made the most of a singles by Becca Caputo and Carpenter along with a pair of errors by the Huskies to put the deuce in the book.

In the fifth, Kayla Gee singled and scored on an RBI single to center by Gricoski to complete the LHU scoring.

Not to go away totally blanked for the day, Bloom scored its only run of the afternoon in the sixth when Erin DelPierre doubled to left and scored on a sacrifice fly to left by Sammi Starr.

With the LHU ranks depleted by injuries and an excused absence, Shannon pulled her version of a “Houdini’s juggling trick” with her pitchers and it worked to perfection.

Caputo started and went two innings, Gee came on to work the next three before Slattery returned to the circle to slam the door shut on the Huskies.

“We have been fighting injuries and sickness so honestly I don’t know what my plan was,” said Shannon. “I knew that I didn’t have a fully-healthy pitching staff so I was going to do what was necessary to get through the game. The good thing is they all did their job and I am really proud of them.”

As for returning to the circle in game two, Slattery pointed out that she will do whatever it takes to get the job done.

“Honestly, I have come to expect anything because they (Bloom) are a good hitting team and I did my best to keep them off balance,” Slattery said. “I think coach (Shannon) did a good job today of utilizing our entire pitching staff. I guess I had a little bit of a feeling that I might be coming into the game.”

“Right now our goal becomes to just keep on winning, chugging along and continuing to keep moving toward the height of our season,” Slattery added.

Shannon agreed with her pitcher.

“We know we have to work all the way to the end this year because we put ourselves in a little bit of a hole so these are two big wins.” added Shannon. “Hopefully we can feed off today’s wins and keep it rolling.”