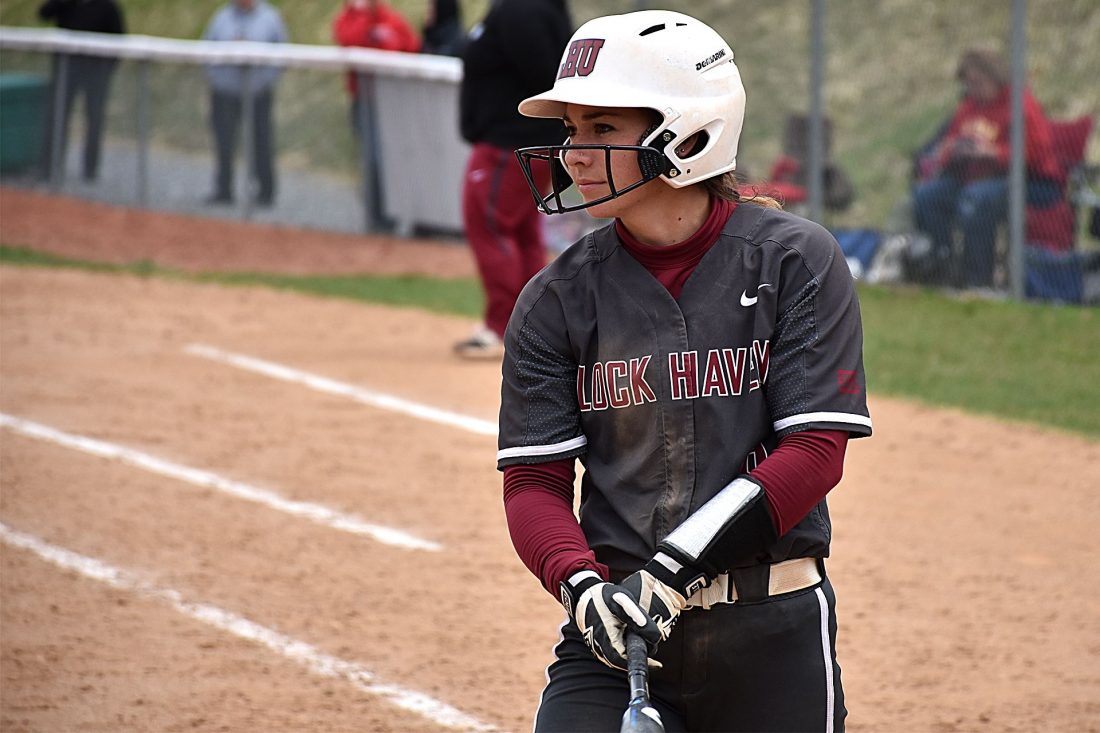 LOCK HAVEN — When Mansfield University and Lock Haven University met head-on at Lawrence Field Tuesday afternoon, there might have been possible post-season playoff ramifications on the line.

However, when the two PSAC-Central foes completed the doubleheader, neither team could gain any advantage on the other as the two teams split the twin bill, LHU taking the opener 5-1 before the Mountaineers bounced back to capture the nightcap by a 9-1 final in six innings, the contest abbreviated by the 8-run mercy rule.

Lock Haven head coach Kelly Shannon knows very well the importance for her team to keep winning at this stage of the season.

“You have to win. You can’t go into the postseason splitting,” said Shannon. “It just won’t work. We played well in game one but we were anything but sharp in game two. That is something we have to work out.”

In the first game, the Bald Eagles featured outstanding pitching by Bekah Slattery, the lefty going the distance for the win. In her seven innings of work, Slattery allowed just two hits, walking one while striking out 14 Mountaineer batters along the way.

She lost her shutout in the sixth inning when Lacey O’Donnell led off with a triple to centerfield and scored on an RBI ground out by Alli McGovern.

“She struck out fourteen and she is right up there in the NCAA (statistics) in strikeouts per seven innings,” said Shannon. “She is doing her job and I can’t ask any more of her.”

Not only did Slattery do the job in the circle, she also came up big with the stick. She reached on an error and scored LHU’s first run in the third on an RBI single by Casey Carpenter, before driving in the next two Bald Eagle runs in the fourth with a two-run double following singles by Amanda Criss and Mikayla Ruppert.

Already up 3-1, Chloe Kennedy gave the Bald Eagles some added insurance in the fifth when Becca Caputo singled to left and Kennedy followed with a two-run shot to left field.

In game two, the Mountaineers jumped on top with a pair of runs in first for a 2-0 lead before using some small ball and heads-up baserunning in the fourth to push a half dozen runs across the dish to break things open at 8-1.

“That is our game. Mountie softball this year is put the ball down on the ground, create some chaos and take the extra bases when they don’t cover them,” said Gallagher. “When that happens, someone has to come up with a big single or double because we don’t hit home runs. That is our game and they did a good job of executing it today.”

Lock Haven’s lone run in the game came in the first when Kennedy hit a solo home run to center field.

In the big inning, the Mountaineers “juiced” the sacks when pinch-runner McKenna Russell, who ran for Lesley Fritz, moved to third after back-to-back successful bunts by Hannah Breitigan and Alex Hein.

Joelle Snyder chased Russell across the dish with an RBI single to left before Alli McGovern cleaned house by driving in three runs with a three-run double to left.

McGovern scored the eighth Mansfield run on yet another successful bunt by Deshea Jones, some heads-up base running by Jones and an RBI ground out by Hannah Swartz.

“Any time you give somebody more opportunities where there should have been an out they are eventually going to capitalize on them,” said Shannon. “We just have to a better job defensively than we did in both games, but in the second game, we definitely have to step it up a little bit more.”

Already up 8-1, Mansfield scored the mercy-rule clincher in the sixth when Allie McGovern opened with a single and scored on an RBI single to left by O’Donnell.

Just as Slattery had done to Mansfield in the first game, Mountie hurler Alexis Easling was dominant in game two. For her six innings, Easling scattered five hits, allowing one earned run while walking one and striking out four.

“Not only did we get good pitching (from Easling), but we also played outstanding defense,” said Gallagher. “She did an outstanding job of mixing speeds and working both sides of the plate. She is a young pitcher and that says a lot about the job she did after giving up that home run in the first inning.”