Bucktail Bucks get 10-0 win over Williamson 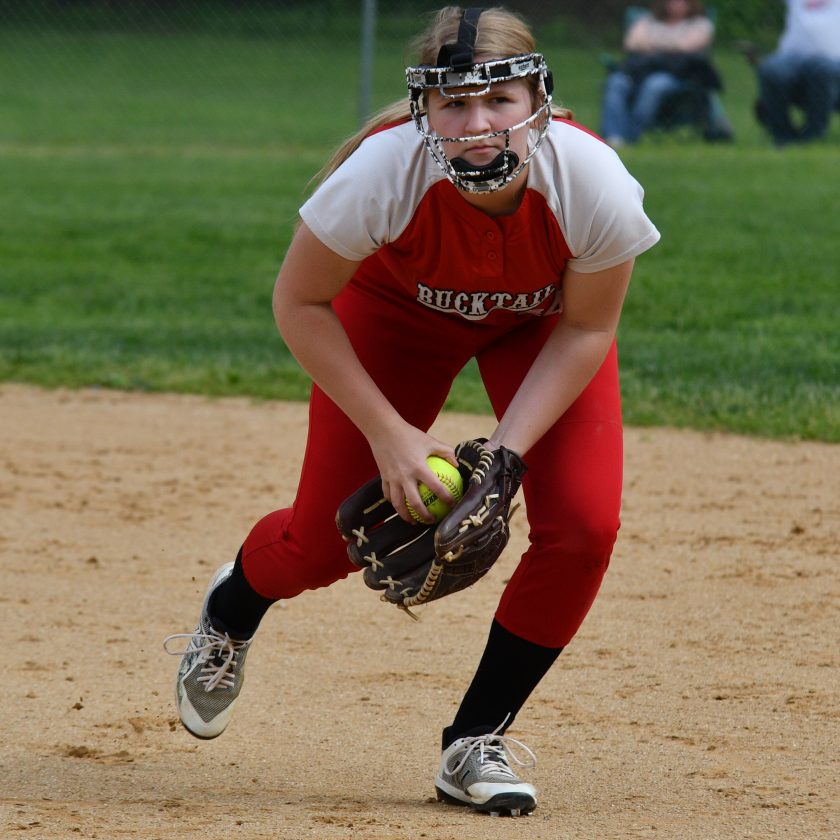 (KEVIN RAUCH/FOR THE EXPRESS) Bucktail second baseman Tessa Cowfer was all over the field Thursday afternoon recording six outs as Emma and Myka Poorman combined for the no-hit win.

Farwell-For the first time in eight games the Bucktail starting lineup returned to resemble their opening day roster, and the results were instant. Emma and Myka Poorman combined to throw a no-hitter against AA Williamson as the Bucks improved to 17-2 heading into their final game of the season tomorrow against Galeton.

Bucktail used a five-run second inning as a springboard to compliment the Poormans’ performance on the mound en route to a 10-0 five inning win. A myriad if scenarios lay in front of the Bucks, whose postseason will be known this weekend with much of their fate affected by Montgomery, and the teams that are on the bubble of making the playoffs.

Montgomery carried a 16-2 mark into their final game of the season last night against Lewisburg as the Rams held a .10 percentage point to make them the top ranked D-4 Mid-Penn ahead of the second place Bucks. Montgomery was not playing a 20th game of the season, so if Bucktail can get their game in against Galeton and win that extra game it could factor into the standings.

The playoffs are slated for May 21 and May 23, and the championship May 30 with the winner advancing to States.

With the postseason just around the corner the Bucks welcomed back Julie Green to first where she has missed games to injury and the rest of the roster fell into place.

Second baseman Tessa Cowfer scored numerous assists in getting the no-hitter as she recorded six-outs including tracking down a ball in right field, shallow center and sprinting to an infield blooper in the top of the fifth keeping the no-no intact.

It was Bucktail’s fourth no-hit game of the season with Emma scoring two by herself and the sisters teaming up to record two others.

Bucktail picked up hits from Sara Kepler, Raleigh Isaacs, Jordan Burrows, Myka, Emily Cross, Emma and Jordan Burrows with the later two picking up 2 RBIs as they moved the lead to 7-0 following a six-run bottom of the second.

Isaacs and Emma Intallura started the bottom of the fifth off with hits setting the table for a Burrows blast up the middle for the game-ending ten-run rule win.

The win, and steady lineup, was just what the team needed following Saturday’s error-riddled loss to Cowanesque Valley and coach Mike Poorman loved what he saw from his team.

“That was definitely a positive, getting Julie back and getting everyone back in their positions improved us instantly,” the coach said following the win. “Since the second game of the season we’ve dealt with sickness, injuries and empty positions, this was a great performance all the way around tonight.”

“The infield set the tone, Tessa made a heck of a play for us late, it makes no-hitters even better when it’s a total-team contribution,” finished the coach.