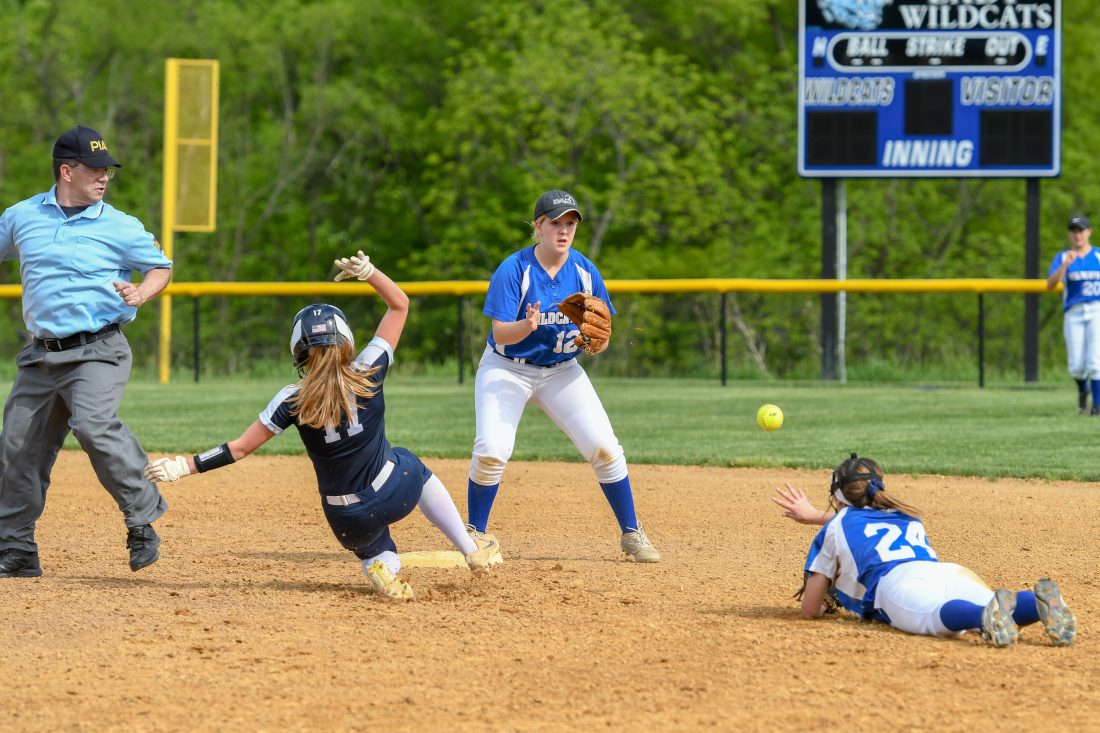 (TIM WEIGHT/FOR THE EXPRESS) Central Mountain’s Alyssa Fisher (24) makes a diving save at second and tosses the ball to Riley Houser (12) on the base. Central Mountain won the game, 11-1, to advance to the District Championship.

MILL HALL- Central Mountain’s slight 2-1 lead had head coach Fred Caldwell uneasy. His team was in a competitive contest with two-win Hollidaysburg, but the coach knew the Golden Tigers’ record wasn’t reflective of their attitude.

“I’m always worried,” Caldwell said of the early one-run lead. “But I told our girls when Hollidaysburg was warming up that they don’t look like a two-win team. They looked much better than that. I don’t want to say we took them for granted, but by the fourth inning our offense kicked in.”

Central Mountain exploded for five runs in the third. They totaled another four in the fifth to drop Hollidaysburg, 11-1, in five innings and advance to next Wednesday’s District Championship versus the DuBois Beavers.

“I thought the game went well,” Caldwell said. “We started off a little bit slow, and we didn’t really come along until the fourth inning. But in the fourth and fifth inning we started hitting the ball and playing like we should’ve been playing.”

Madison Knepp threw three strikeouts and scattered four-hits in a complete-game performance. Her only blip of the game was the lone run allowed in the opening inning.

“Madi’s been great all year,” Caldwell said. “She’s gotten stronger as the year went on and she’s been great.”

Alyssa Fisher’s play at second highlighted a strong-defensive afternoon. Her standout effort of the game was a diving grab to rob Trinity Molliver of a base hit in the third.

“Alyssa played her heart out at second base,” Caldwell said. “The two diving attempts, and keeping the ball in the infield, were just fantastic plays. You can’t ask any more of a player than that.”

The Golden Tigers recorded half of their four hits in the opening inning. Meghan Cutshall cracked a leadoff double, setting up Trinity Molliver’s RBI groundout to put Hollidaysburg ahead, 1-0. Central Mountain responded with a pair of runs in the back half of the inning– but the Golden Tigers kept the game competitive to trail just 2-1 entering the bottom of the fourth.

“Everybody believes in themselves and we just have a great group of girls,” Hollidaysburg coach Heather Perry said of the game’s early competitiveness. “We were just ready to go out there and prove something today.”

“Going through the lineup twice, and getting a couple of looks at the pitcher, helped us to begin scoring in that inning,” Central Mountain coach Fred Caldwell said. “Their pitcher had a different delivery than what we’re used to, and a couple of girls commented that it was throwing their timing off just a little bit.”

CM put the game away in the fifth with a four-run two-out rally. Alyssa Fisher commenced the scoring with an RBI single to widen the lead, 8-1. Later in the inning Autumn Dershem supplied her third RBI of the evening, which set up Riley Houser’s game-ending two-run single to seal the win, 11-1.

Central Mountain’s win sets up a rematch with DuBois in next week’s district championship game. The Wildcats bullied the Beavers in a 14-0 win back on April 27–but Caldwell is anticipating a more focused Beaver team in the title game.

“I honestly think we saw them on a little bit of a down day for them,” Caldwell said of the first matchup. “I know that they’re a tough team. They’ve played a lot of games really close and they’ve won some big games. I’m sure that they’re going to be a very tough challenge for us.”