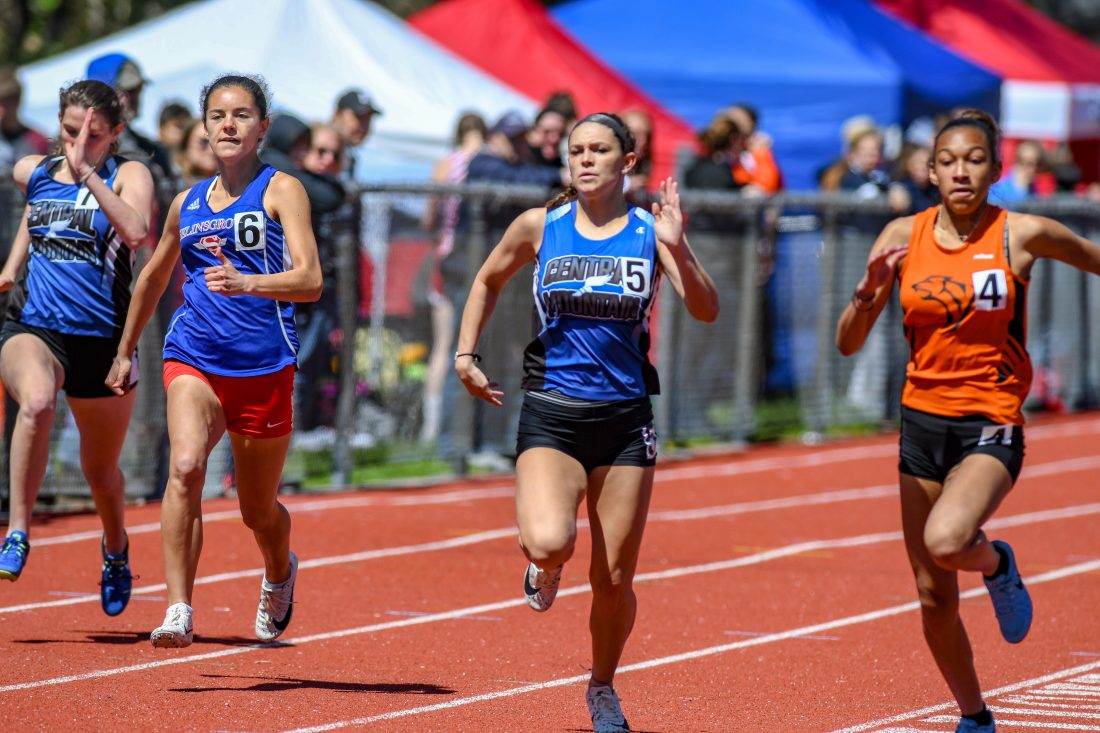 (TIM WEIGHT/FOR THE EXPRESS) Central Mountain's Hunter Barger (5) competes in a race during a high school track and field event.

MILL HALL- Tennis wrapped up its season, softball won twice, baseball dropped two and the track and field athletes posted some solid individual performances. That was last week in Wildcat sports. Let’s break it down.

The tennis team took to the courts just once last week, a Wednesday matchup at Tyrone. Unfortunately, only Gavyn Walker playing in the No. 1 singles spot for the Wildcats was able to earn a victory and CM ultimately fell by a 4-1 score. The Wildcats were very competitive in two of the four losses as Ujjval Adroja, singles No. 3 and Brady Williams and Ethan Hall, doubles No. 1 lost in three set matches. CM finished its season with an overall record of 5-11.

Track and Field was in action at Danville on Tuesday and despite losing both the boy’s and girl’s meets, some strong-individual performances were recorded. Registering first place finishes for CM in the meet were, Ashley Rich 100M Hurdles (Personal Record), Hunter Barger 100M (PR) and 400M (PR), Corbin Green 800M , MacKenzie Hanna Pole Vault, Amelia McCloy High Jump, Jonna Diehl Long Jump and Triple Jump, Dominick Kennedy Long Jump and Morgan Zimmerman Javelin. On Saturday the athletes were at the PHAC League Championships in Bloomsburg. Top 10 finishers for CM included McCloy first in the High Jump, Rich eigth in the 100M Hurdles and Barger 10th in the 200M.

The Softball team was in action just twice last week, both wins. After having a scheduled game with Hollidaysburg on Monday canceled by poor field conditions, CM earned a hard fought 6- 4 victory over Selinsgrove at home on Tuesday and followed it up with a six inning ten-run rule win at Altoona on Thursday. In the win over Selinsgrove, freshman Caitlyn Watson led CM with a three-hit effort, including a home run. At Altoona it was senior Autumn Dershem leading the way with three hits as CM moved its season mark to 9-9.

Errors hurt the Wildcat Baseball team last week. On Monday in a 4 -1 loss at Bellefonte the Wildcats outhit the Red Raiders but were hurt by sloppy defense in committing four errors. Leading hitters in the contest were Zach Eck and Peyton Johnson with two hits each. On Wednesday at Danville the ‘Cats scored three runs in the top of the first inning and held on for a narrow 3- 2 victory. Once again it was Eck as well as Kaden Falls and Donovan Burnell each with two hits to their credit. Returning home on Thursday to take on Shamokin, the Wildcats hoped to make it back-t- back wins. However, the visitors posted seven runs in their final two at bats to leave Mill Hall with a 9-5 victory over their hosts. With the 1-2 week, CM’s overall record stands at 10 and 6.

Athlete of the Week: This week I’m going to the track for my selection. Senior sprinter Hunter Barger is the choice on the strength of her two first-place finishes against Danville. In both the 100M and 400M her times were personal bests. An honorable mention this week goes to Barger’s teammate, Jonna Diehl on the strength of her two first place finishes at the same meet. Amelia McCloy’s PHAC championship is worthy of note as well.

Team of the Week: OK, I’m being a little bit creative here and instead of a team, I’m going with a program, the softball program. The varsity team with a combination of veterans and underclassmen had a good week going 2-0. At the same time the JV squad just keeps pounding out wins. However, to be clear it’s not really the wins that has me thinking highly of the squad. Rather, everyone I talk to comments on how well those young athletes play the game. Also, I hear many positive comments about their understanding of team and how well they play together. Hopefully they will continue to develop because every level of play higher is markedly tougher. With the right attitude and a continued commitment to team, this program seems to have a future that is very bright considering that several freshmen and sophomores are already making their mark at the varsity level.

Looking Ahead: Baseball closes out the regular season as they host home games against Mifflin County today and Milton on Wednesday at Mill Hall Community Park.

Softball visits State College today looking to finish the regular season above the .500 mark. Later in the week they will participate in district playoff action.

The track and field athletes will participate in the District 6 Championships on Thursday at Mansion Park in Altoona.

Finally, there will be plenty of JV baseball action on tap this week as the young Wildcats hit the diamond three times including home games today and Thursday at the Beech Creek Legion Field. If you haven’t seen this team play yet, take the time to do so, they are worth the look as they have numerous guys that will soon be finding success on the diamond in Mill Hall as a varsity player. Just as with the softball program, the baseball program appears to have the makings of a bright future. Assuming the athletes understand the need to work hard to continue their development as next level players.

Next week we will have some playoff action upon which to report. Enjoy the contests.