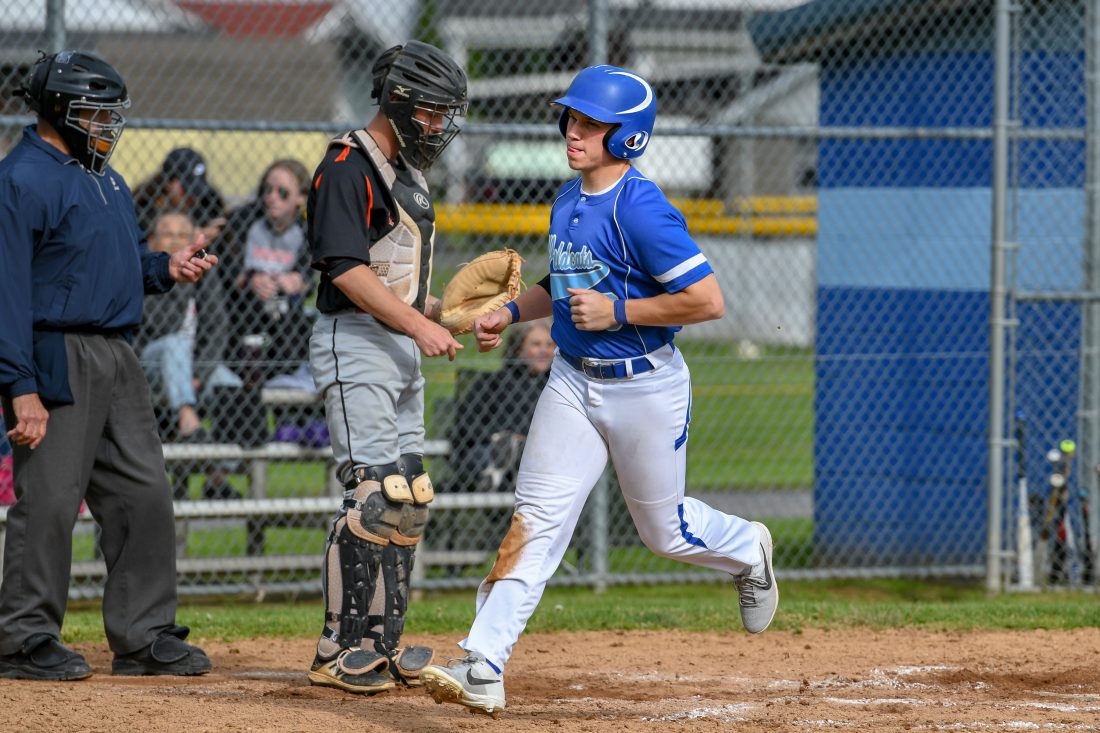 MILL HALL — It was Senior Day for the Central Mountain baseball team Wednesday afternoon at Mill Hall Community Field and the CM seniors made the most of their final home-field appearance.

With clouds drifting in-and-out of the area, the Wildcats weren’t about to let Mother Nature rain on their parade as they scored early and often to blank Milton 12-0 in a game abbreviated by the mercy rule in four-and-a-half innings.

“We started out scoring and we kept scoring and that was huge for us,” said CM head coach Mike Kramer. “If you score, you have to add on and not let up and we stayed after it.”

As for seniors Ross Glossner, Tanner Lavelle, Tommy Pringle, Zach Eck, Donovan Burnell, Logan Fisher, Chase Payton, Aaron Swartz and student manager Jillian Walker, Kramer had a lot of good things to say about the contributions of the group to the CM program during their careers.

“This senior group had a tremendous team mentality about them,” said Kramer. “They contributed in many different ways and they always tried to do what was best for the team. It was great to watch them throughout their careers to bring our program along and make it better.”

Situational hitting had been a thorn in the side of the ‘Cats in a number of outings during the season, but that was not the case in the lopsided verdict over the Black Panthers.

Putting up three crooked numbers, three in the first, three more in the second and six in the fourth, the Wildcats cruised to the win.

“We had guys come up with runners in scoring position and we were able to come up with clutch hits,” said Kramer. “That wasn’t the case for us in some games this year.

While the Wildcat bats were alive and well, led by Burnell’s 2-hit, 5-RBI game with the stick, the Wildcats took advantage of hitting with runners in scoring position to make things easy for them.

“Donovan Burnell came up big for us today, with five RBIs,” said Kramer. “We had other guys come through with runners on base and that is what we have to do if we are going to be successful in the playoffs.”

While his teammates were supplying him with a lot of bat support, Payton went the distance for the win, shaking off a couple of early hiccups to keep the Panthers off the scoreboard.

For his five innings of work, Payton only allowed Milton two hits, walking four and striking out a pair.

“Chase settled in and went through the top of their order to get them out,” Kramer said. “He did have a span where he wasn’t controlling things as well as he might have but then he settled in and stranded quite a few runners in scoring position which was huge for us. I was especially happy for him to be able to come up big on senior day.”

Now that the regular season is behind them, it is on to the playoffs for the Wildcats and that means a rematch of an early season game with Hollidaysburg, a game that saw the Golden Tigers come out on top of the ‘Cats. “They beat us something like 15-8 and that didn’t sit well with us,” said Kramer. “All we have to do is come back and play a solid game of baseball in the three areas of hitting, pitching and defense and we will be OK. We are going to give it our best effort and we’ll just have to wait and see what happens.”