Auto Racing: USAC came to Central PA with the Silver Crown cars and the Sprinters 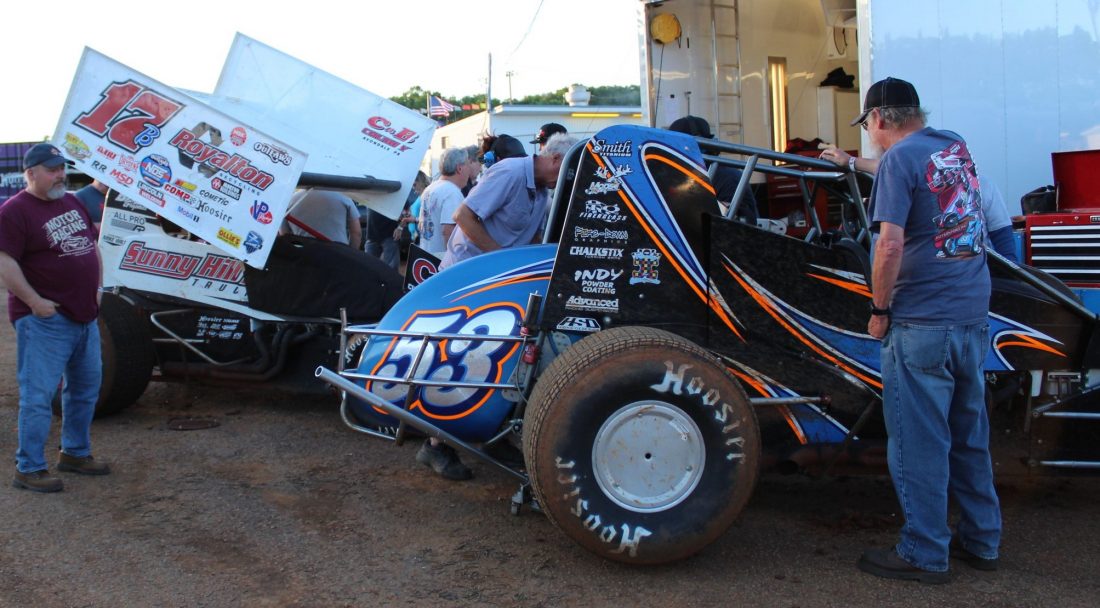 (PHOTO PROVIDED) Drive Steve Buckwalter examines his two cars that he raced in on Friday night.

Last weekend a storm blew into town, but unlike the ones we’ve had lately, this was a good storm.

It was the Eastern USAC Storm to be precise. On Friday night the Silver Crown Cars were at Williams Grove for their 100-lap feature, which saw seven caution flags slow the race pace with Illinois driver Chris Windom taking the early lead from the outside of the front row. Windom was chased by polesitter Justin Grant, of California, for the first 37 laps before Pennsylvania USAC’er Steve Buckwalter, of Royersford, motored into second after running a slow and steady pace to the front from the eighth starting spot. Buckwalter followed Windom until a lap 47 restart when he was able to bolt underneath for control. Buckwalter was able to pull away from Windom during the ensuing laps as USAC point leader Kody Swanson came to second on lap 82 with the leader over two seconds ahead.

After a restart with 11 laps to go, Swanson made a bid for the win only to come up short while also jumbling the field in the second turn, which saw Brady Bacon zip through the cluster for the second spot while Windom got by Swanson for third.

Buckwalter had the race in hand with four laps to go; however Windom proved rather ungraceful in his bid to steal the win with under a lap to go as he attempted to drive through the leader in the first turn. The result saw Buckwalter spin out, forcing a green-white-checker run to the finish in which Windom ended up popping a tire just after taking the white flag. This allowed Bacon to blast by and take his first-ever career USAC Silver Crown victory, worth $8,000.

It would have also been Buckwalter’s first career USAC Silver Crown win. Freddie Rahmer fared better in the 410 feature making it back-to-back wins for his third of the season.

Then the USAC moved to Port Royal where Tyler Courtney, nicknamed “Sunshine” by Bryan Clauson, his friend and mentor and all around inspiration would have been proud on his 30th birthday to have Courtney dedicate his first win to him!

Lucas Wolfe claimed his first win of the year in the Weikert’s Livestock sprint car feature.

In other action Andy Haus spent 20 laps in hot pursuit before rallying late to score the Late Model win at Bedford Friday night. In other action, George Dixon went pole to pole in the Limited event, as did Dalton Ritchey in the Pure Stock race, while Drake Troutman and Ryan Peer came from the pack to score wins in Pure Stock and 4 Cylinder action.

And down at Selinsgrove Speedway Jason Shultz of Carlisle defeated a star-studded field of Patriot 360 sprint cars to win the $2,271 top prize in the 25-lap Joe Whitcomb Memorial Saturday night at Selinsgrove Speedway. Shultz, driving the Horstcraft Millworks No. 29, recorded his third win of the year and was also the night’s Fast Tees Fast Qualifier over the 25-car field with a lap time of 16.726, a new track record for the 360 sprint cars.

Andy Haus, of Hamburg, made a late-race pass for his $2,000 win in the 25-lap super late model race. Haus became the seventh different late-model feature winner in as many races at the speedway this season.

Shaun Lawton of Bloomsburg wired the pro stock field for his second win in a row in the division’s 15-lap race, while Dustin Snook of McClure returned to Victory Lane for the first time in two years in the 12-lap roadrunner feature.

Selinsgrove will be back in action at 7:30 p.m. Saturday, June 22 with the United Racing Club-sanctioned 30-lap Kramer Cup for 360 sprint cars plus super late models, Mid-Atlantic modifieds, and pro stocks sponsored by Reinhart Food Service. Gates will open at 5 pm.

See you at the Races!

Penn State All-American Micah Parsons is opting out of the 2020 season because of concerns about COVID-19. The ...