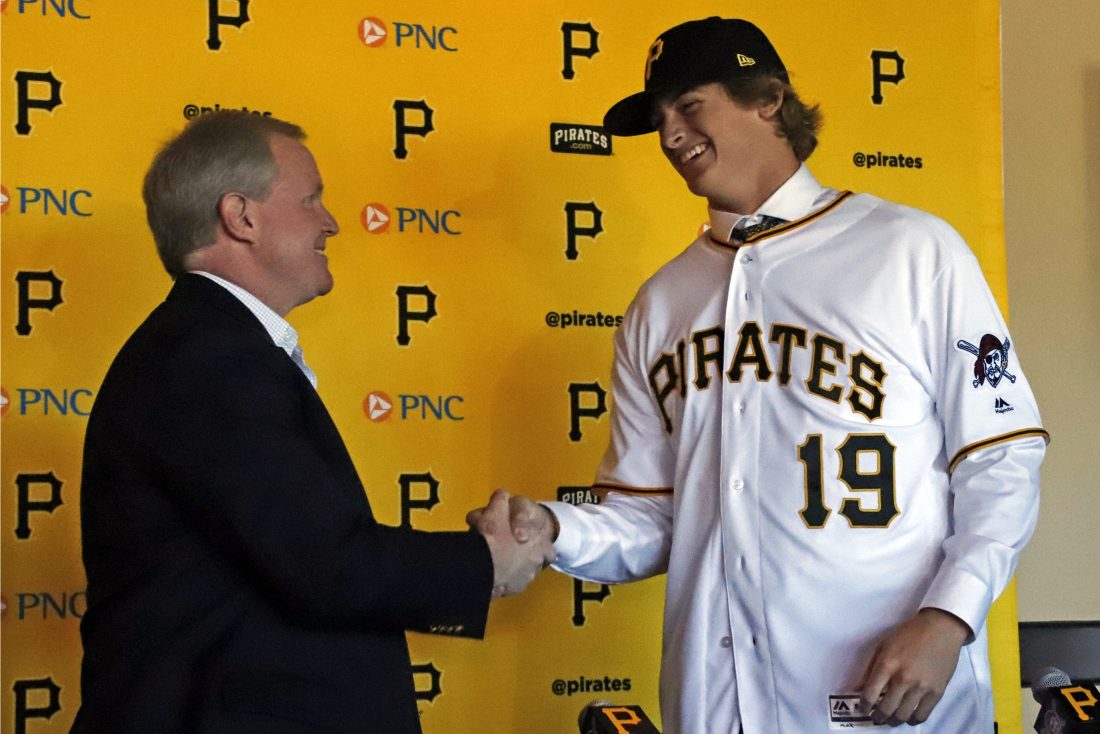 PITTSBURGH — Quinn Priester picked up a dry-erase marker and jotted a couple of notes to himself on his bedroom mirror before his final season of high school baseball, something to provide a little extra nudge to get through the drudgery of a northern Illinois winter.

One message read simply “first-round pick.” The other read “get change-up better.”

Priester let himself wipe away the first directive after the Pittsburgh Pirates selected the big-armed 18-year-old from the Chicago suburbs in the first round of last week’s draft. How quickly Priester addresses the second note will play a major role in determining how long it takes him to make the arduous climb from high-profile prospect to major leaguer.

It’s a path Priester insists he’s ready for. He is so eager to get started that he signed with the Pirates on Monday for a $3.4 million bonus, flew to Pittsburgh on Tuesday to get a brief look at PNC Park and heads to Bradenton, Florida, on Wednesday to start playing for the franchise’s Gulf Coast League affiliate. Games are played there in the middle of the afternoon in front of a handful of people, far away from the bright lights of the big leagues.

Priester understands it’s part of the process, one of the reasons — along with a signing bonus that made him an instant millionaire — he chose to turn pro instead of playing at TCU. His family laid out the metrics in the run-up to the draft. Its research indicated about 75% of players taken in the first round reach the majors.

As much as he appreciated the chance to pitch for the Horned Frogs, Priester knew where his future lay the moment he heard his named called at No. 18. He agreed to a deal $81,300 below slot value.

“My parents supported me throughout the whole way,” Priester said Tuesday, wearing a white No. 19 Pirates jersey. “They gave me the facts. Gave me the research. We felt like this was the right decision.”

One that Priester, parents Andy and Chris and sister Madison did not take lightly.

“If he wound up being a fifth-round pick, chances are he would have gone to TCU,” Andy Priester said of his son.

Instead, while most of his high school classmates spend one last summer soaking in the final moments before college, Priester will be hard at work in the sweltering Florida heat.

“Everyone talks about it being a grind and embracing it,” he said.

In an age of specialization, Priester is a bit of a throwback. He started playing football and baseball when he was 5 and spent the next decade-plus balancing the two. It wasn’t until the summer of 2018 that baseball became the focus. Having a fastball that reaches 97 mph tends to do that.

“I love football, but baseball is what I always itched for,” Priester said. “That one-on-one mentality of pitching. You versus the batter is kind of what drives me.”

Priester — who had received interest from nearby Northwestern about potentially playing both sports for the Wildcats — switched from quarterback to wide receiver last fall and helped Cary-Grove win a state title. He overhauled his training program to take better care of his right arm and went 8-2 with a 1.00 ERA and 91 strikeouts in 60 1/3 innings during his senior season.

Suddenly, what was once a hopeful missive on a mirror became decidedly tangible. Pittsburgh scouts started looking heavily at Priester last summer and their interest grew the closer they looked at the 6-foot-3, 200-pound kid with the wavy blond hair.

“The physical attributes speak for themselves,” general manager Neal Huntington said. “The velocity is climbing the right way as he physically matures. He’s got a (curveball). … He will figure out a change-up.”

A pitch he didn’t really need in high school. Why bother when you’re blowing away overmatched hitters? That will change as a pro. And there are no more messages to add to the mirror in his bedroom. The message he repeated to himself over and over this spring is one he’ll carry south with him.