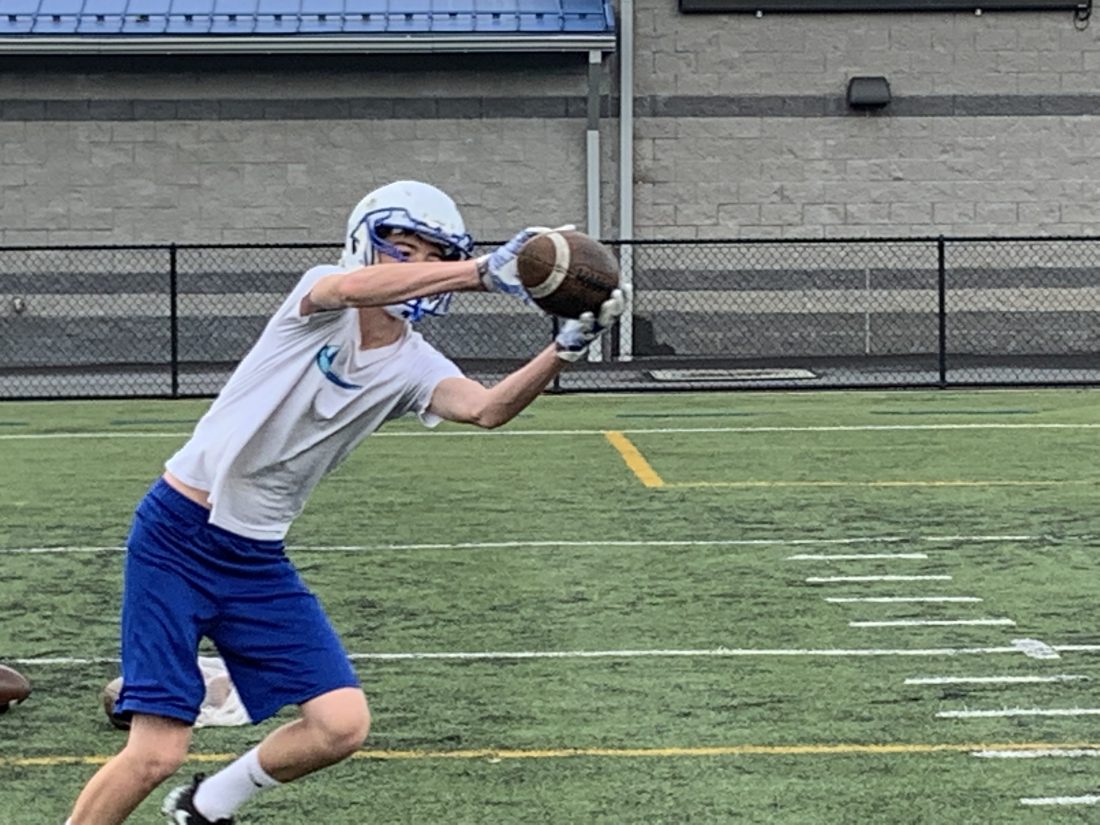 (PHOTO PROVIDED) Junior Nick Long makes a catch in a hands drill during a voluntary workout at Malinak Stadium on Thursday morning.

MILL HALL- The secret is out.

Yes, most people are well aware of the struggles that the Central Mountain football program has endured in terms of wins and losses in recent years. In fact, despite a number of outstanding players and games, as well as a few competitive teams over the years, consistent success has eluded CM football throughout its history.

That being the case, logic would dictate that players and coaches alike put forth very little effort and care not about reversing the fortunes of the program. Rather, they would simply accept the results as they have been and move on without much concern. It would be much easier just to accept losing than to have to work hard when other, more relaxing or fun things could be happening.

However, those who might use that logic would be underestimating the current group of Wildcat gridiron prospects. It would certainly be very easy for these 15-18 year-old kids to spend their summer days sleeping late, swimming all afternoon and hanging with friends playing video games. After all, these kids have experienced losing football games. A losing trend is hard to change.

They seem committed to changing a culture. Being culture changers is not easy. It takes work. Lots of work…hard work…old habits must change. Dedication to doing things right is key. Thursday morning, amid conditions that could easily be mistaken for the tropics, head coach Jim Renninger and members of his coaching staff assembled with a big group of young athletes at Malinak stadium for another of their regularly scheduled and well attended voluntary summer workouts.

No athlete can be required to attend such workouts as per PIAA rules.

However, that is not seemingly a factor given the impressive number of attendees that have been participating in this year’s summer sessions. Coach Renninger indicates that the number of regular attendees at the workouts is in the low 50s. Strength training, skill work, conditioning and agilities are all part of the workout routines for the Wildcat prospects. Renninger and his athletes have been holding workouts four days a week throughout the summer and will continue for another week before taking a short break prior to the beginning of fall camp in mid-August.

Yes, these workouts are voluntary.

That is exactly what makes what has been taking place at Malinak on weekday mornings all the more impressive. You see, it is clear by the number of attendees as well as the effort level that they’ve displayed during the workouts that they are driven to reverse the fortunes of the program. A word commonly uttered by both players and coaches alike Thursday was commitment.

Coach Renninger said that one of the primary goals of the offseason program has been “to instill some commitment and have kids develop a vested interest in the program.”

Undoubtedly when players put in the hard work, it is harder for them to accept anything but positive results. The third-year head coach went on to say that the commitment this year has, “been great. The highest we’ve had since I’ve been here.” Knowing Renninger as I do, he was not slighting any former player who was committed but rather referring here to the large number who have been regulars this offseason.

Finally, Renninger also said that the, “knowledge base is higher.” The idea there is that more will be able to be accomplished much faster when fall camp begins because the basic concepts, skills and ideas are already in place for many. Senior tailback Rocco Stark was very upbeat in his comments about the workouts. “Very dedicated, super hardworking, good chemistry, and fundamentally sound,” was how he described the workouts so far.

While offseason work guarantees a team exactly zero wins when the season rolls around, it does without a doubt set the team on the right path toward success. It is evident in watching and listening to what is happening with the current group of Wildcat football prospects that they are confident that they are putting in the work that will pay big dividends this fall.

How many games will the Wildcats win? No mention of that around these workouts right now.

What they are stressing is commitment and hard work.

So why should there be optimism surrounding Wildcat football right now?