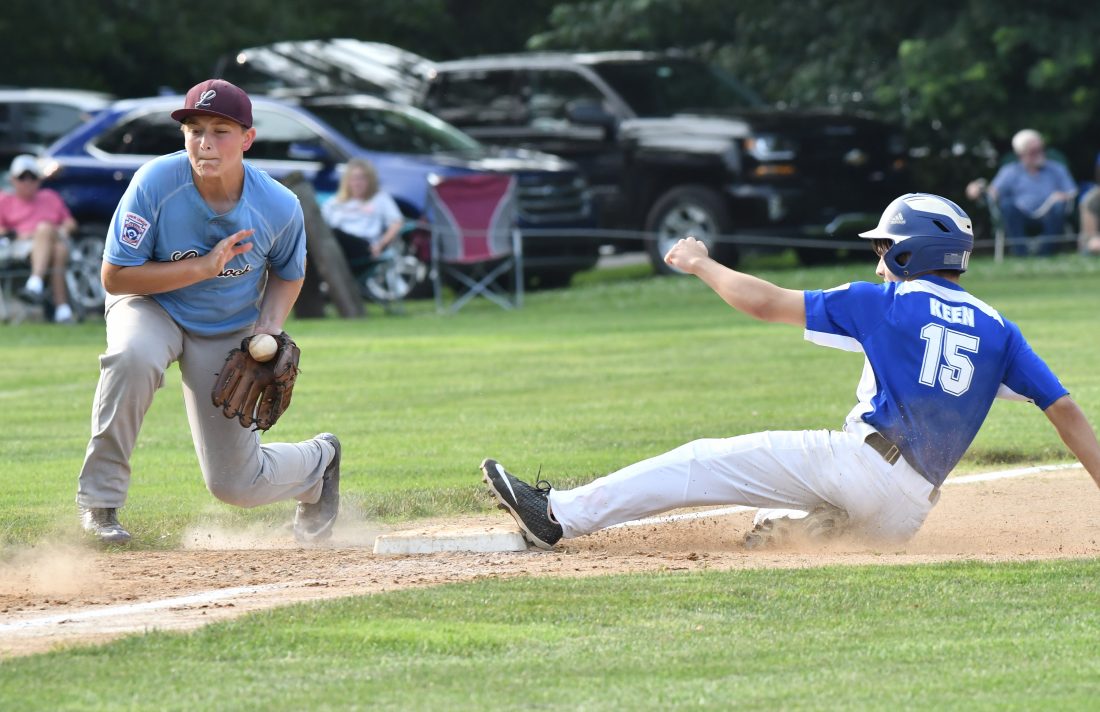 MARK NANCE/Sun-Gazette Loyalsock third baseman Carter Secora tries to get control of the ball as Keystone's Colby Keen safely steals third base in the third inning.

It was a little over a week ago that Keystone’s junior baseball team lost to Montoursville, 11-6, in the first round of the District 12 tournament. And after that first loss, Keystone manager Patrick Johnson let his team know that they were better than that and plain and simple, if they wanted to win the title they would have to rattle off five consecutive wins.

Keystone defeated Loyalsock, 11-6, in the district championship game at Montoursville’s Kiwanis Field to force a rematch today at East Lycoming at 5:30 p.m. in a winner-take-all game for the championship.

“We came out of the losers’ bracket, had a pretty rough first game and knew we were a lot better than that,” Johnson said. “We said ‘listen, now we got to win five in a row.’ That’s four and that was the message out there. You won four, lets get the last one.”

Keystone got off to a hot start against Loyalsock and jumped out to a quick 9-0 lead after two innings. In the second inning, Keystone scored seven runs on a two-out rally, using five hits and an error to score those runs.

“That changed our strategy going forward. We were able to save more pitching,” Johnson said. “I was most happy at fact we had disciplined at bats and hit pitches we needed to hit.”

For Loyalsock, that early nine-run deficit proved to be a tough hurdle to clear and despite scoring six runs — four in the final two innings — Loyalsock wasn’t quite able to mount a rally to get it closer.

“I think it was more of a mental thing than anything and then once we calmed down a little bit and started playing baseball, we actually won the last couple of innings,” Loyalsock manager Randy Berger said. “It was just too much of a deficit: 9-0.”

With two outs in the second inning, Corter and Dallas Alexander both reached thanks to an error and walk, respectively. It was then Schlesinger who had an RBI single down the left-field line to drive in Corter and Kelvin Probst ripped an RBI double into center that brought in Alexander. Gabe Johnson followed with an RBI single of his own and two batters later, Gavin Burnell hit a two-RBI single into right field to put Keystone ahead, 8-0. Mason Miller followed with an RBI single into left to make it a 9-0 lead before Loyalsock finally recorded the third out.

In that second inning, Keystone sent 11 batters to the plate.

“That’s what we talked about coming in. We wanted to set the tone,” Johnson said.

Loyalsock broke up the shutout and avoided a possible mercy-rule loss. Colin Berger reached to open the inning with a walk and Caleb Neidig, his pinch runner, would score to break up the shutout. A single and error allowed Alec Kulp to reach base on a single and advance to second before Jaylon Andrews drove hi in with an RBI single into left.

“Once they got in the mindset to wait for a couple pitches instead of swinging at the first pitch, we had disciplined at-bats and I think that helped us get a couple of runs and extend the game and not get 10-run tonight,” Randy Berger said.

Keystone added a run in the fourth inning thanks to Burnell coming up with a huge double down the left-field line to bring in Luke Bowman, who reached on a single and make it a 10-2 game.

Loyalsock though would score twice in the bottom of the inning. Andrews again came up with an RBI single, driving in Jamison Singer who reached on a walk and then Andrews scored thanks to two passed balls allowing him to advance to third and home.

Keystone out-hit Loyalsock, 14-7, and hit well all throughout the lineup.

“It takes an awfully good pitcher to hold us down when we’re disciplined and we don’t swing at bad pitches,” Johnson said. “When they don’t throw somebody who doesn’t have some filthy breaking stuff, we can really tee off on it.”

Loyalsock was held to seven hits and was held hitless in three innings, but Loyalsock’s best hitter was Andrews, who went 3-for-4 with two RBIs and Kulp, who was 2-for-4 with a run scored.

Keystone has battled back through the losers’ bracket since the opening game loss, beating Montgomery, East Lycoming, Montoursville and Loyalsock in a five-day span. Loyalsock — which outscored its opponents 20-6 in districts entering Tuesday’s game — will look to avoid back-to-back losses to Keystone.

Next game: Loyalsock vs. Keystone at East Lycoming, today, 5:30 p.m.